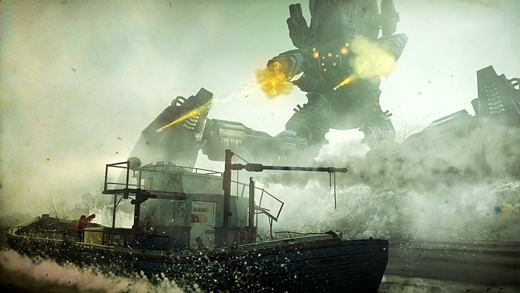 On the strength of Matt Kaplan's review, I decided to grab Resistance 3, a game from 2011 that's already available at a much-reduced price thanks to undeservedly poor sales. Kaplan didn't steer me wrong. Alongside solid gameplay, Resistance 3 delivers a compelling story about a man's journey through an interesting post-apocalyptic landscape. Like many other recent games, however, Resistance 3 flubs the ending, betraying its own tightly-crafted atmosphere.

Although I haven't played them, I'm aware that the previous Resistance games were retro-futuristic military shooters about a soldier engaged in a mid-20th-century war against advanced aliens (Chimera), somewhat reminiscent of Harry Turtledove's Worldwar books. The opening of Resistance 3 references those events, then mostly sets them aside. The hero of those games is dead, and we are going to play his killer, Joe Capelli, who has been drummed out of the army. He lives underground in a small town in Oklahoma, trying to scrape a living from the cooling earth and avoid the notice of the Chimera. Joe isn't free of cares or worries, but he's not on the front lines of the conflict either.

Naturally, this existence comes to an end. The Chimera attack the town, and Joe must fight them off long enough for his neighbors and family to escape. The fight accompanies the arrival of one Dr. Malikov, a figure from Joe's past who warns him that a mysterious tower in New York City is making the world colder, so cold that mankind almost certainly won't survive the winter. At the request of his wife, a reluctant Joe sets off on an essentially hopeless mission to shut the tower down.

The first stop on this journey is St. Louis, where the boat Joe and Malikov have been using for transport gets destroyed. Fortunately, they encounter their first group of survivors, a band of competent fighters calling themselves Remnants, who are fighting the Chimera throughout the city and also conveniently possess a VTOL aircraft.

Here the game first begins to feel a bit constrained. Many of the Oklahoma levels, although actually quite limited in size, had an open feel to them, with fields and low buildings that allowed the horizon to be seen, or at least imagined. The St. Louis levels are narrowed in a visual sense, with canyon-like streetscapes and boxcar mazes that blot out the edge of the sky. The most open level here is still an enclosed plaza.

Yet even though the walls of the world are closing in on Joe, there's still a sense of optimism. The Remnants are strong, determined fighters who want to help Joe and offer the possibility of success in his mission. 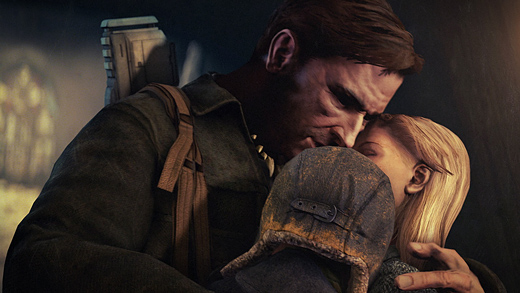 Unfortunately, this isn't a story where the hero soars through the sky. Joe ends up on the ground in Pennsylvania, working himself through some rough terrain and across a bridge before he manages to come to a small walled town that's on the verge of destruction. Here the people are religious zealots, casting themselves on the mercy of God, content just to survive. They need Joe more than Joe needs them, at least when it comes to resisting the Chimera.

Joe fights his way through a level that's a bit too much of an homage to Half-Life 2's "We don't go to Ravenholm…", where it's notable that the world seems to close down even more. The dimensions of the level (physically and visually) aren't that different from Oklahoma, but the darkness and prevalence of indoor zones make it feel even tighter than St. Louis. This sense becomes even more acute when Joe must enter a mine to rescue the only person who can repair the town's train.

All this time the walls of the world have been closing in around Joe, so it's appropriate that after a brief travel interlude he finds himself trapped in a literal prison, his only hope for taking down the tower stripped away, facing certain death. Here the humans Joe finds are either almost entirely dependent on his help or openly trying to kill him, and the sky is almost never in sight. These people have become animalistic, abandoning the idea of resisting the chimera entirely, to focus on evasion and survival by any means.

At each stop on Joe's journey, the human forces become weaker and the world becomes narrower; the narrative and level design work together to create a sense of bleakness. Unfortunately, the end of the game ignores this trajectory. When Capelli makes it to New York, still with no real hope of success, the sky makes another appearance and humanity's story slips out of the picture. The game instead devolves into standard "one-man army" nonsense, and although the aliens fend Joe away from the tower itself, he's still able to destroy it, making several improbable escapes in the process.

This segment of the game still works at times, when Capelli is creeping through overrun subway tunnels, and when the Chimera are being torn apart by the aberrant lifeforms they introduced to this planet. In these moments the game maintains its sense of doom, both in level design and in the impression that the invasion has grown too large for even the Chimera to control. However, most of these chapters are taken up with extended, workaday fights in boring urban ruins and generic sci-fi facilities. The happy ending the game ultimately delivers doesn't feel earned or produce any catharsis.

In fact, that ending, where the tide turns against the Chimera and Joe reunites with his family, seems like a betrayal of the direction the rest of the game was taking. The progressive weakening of human allies and constriction of the levels pointed towards a bleaker, braver fate for Joe Capelli. Had the game ended with his death, or even with his failure, it would have crowned its well-crafted atmosphere with the right kind of closure. Instead, Resistance 3 gives up its soul for a bland conclusion that ends the game, and perhaps the franchise, on a sour note.

Just finished R3 last night — it’s the best game in the series, even if that’s not exactly saying a lot. I think the “playing it backwards” idea is brilliant, actually. The last levels are certainly the weakest in the game and it is sort of an odd narrative departure. I expected a downbeat ending, and felt almost cheated when I didn’t get it. The happy ending feels like a sell-out in a lot of ways. The game would have been a more intriguing narrative experience (and the “happy ending” more justified) if things had worked in reverse. I almost… Read more »

Aha! Finally a Sparky Clarkson article which is low-brow enough for me to comment on! I also bought Resistance 3 on the back of Matt Kaplan’s review, which I thought was excellent. I found the gane really dragged towards the end (in New York), and that initially coloured my view of it, but I’ve often thought about it since. I loved the bleak atmosphere and setting, and the increasing sense of constriction and impending doom as Capelli moved towards New York. The New York city levels were fine, though I had a sense that they succeeded more as places to… Read more »

I’ve argued before that the best way to play Resistance 3 would be to mod it so that it runs backwards. You start off fully kitted out with amazing weapons, desperately trying to stop the Chimera invasion. You fail, and run, and your weapons slowly degrade as you desperately try to reach one your wife and son in one of the few viable refuges for humanity. Which is attacked as you arrive, leaving you to try and defeat a Chimera patrol with only a couple of barely functional guns.

Words that will never be repeated: “Kaplan didn’t steer me wrong.” I agree with almost everything you wrote, particularly about the last pair of levels.