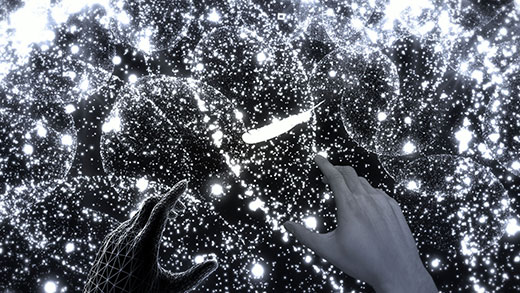 HIGH A late level with a glowing field of stars inside a sphere of equations.

LOW constantly swinging my viewpoint around in a vain hope that a platform would appear.

WTF Is this guy supposed to be old or just southern?

I generally don't pay much attention when somebody levels the accusation that a game is pretentious.  This usually means that the game in question is philosophically concerned with something that doesn't interest the accuser. It's rare for a game's high concept to detract so totally from the experience that it becomes a chore to play. Unfortunately, Rememoried is an exception that proves the rule.

Rememoried bills itself as a "walking simulator" along the lines of Proteus, but it's really a kind of first-person puzzle-platformer. The game never explicitly states the rules or objectives of any of its levels, but in keeping with the title, the key is usually "forgetting".

Throughout most of Rememoried, the position or even the existence of certain objects depends on whether they're being observed. Looking away from the path forward may cause a useful platform to appear, or a blocking object to disappear.

In principle this should lead the player to contemplate the art in each level while occasionally checking the route she'd like to take to see if something useful has shown up there.

In practice, the path the player needs to traverse is much longer than necessary to soak in the view, and the likelihood of a usable platform showing up on any given glance is far too low. Thus, my characteristic experience of Rememoried is standing on a platform, wildly swinging my viewpoint around over and over again in hopes that this time the level will rearrange itself in a way that will allow me to progress.

Rememoried compounds the negatives of this design with the style of platforms and the kinds of challenges it poses.

To work reasonably well, the "forgetting" approach needs legible platforms (preferably with flat tops) and a fairly open field for them to appear in. This would make it easy to tell whether a particular jump will work and maximizes the possibilities for productive footholds to appear. However, in many levels Rememoried limits its jumping area to a tight cylinder, and often the player is leaping between round-ish rocks, which make it difficult to judge distance. In the game's worst level it makes both of these mistakes and then fills the air with falling objects that can knock the player all the way back down to the bottom.

In short, while the "forgetting" idea is interesting, the actual gameplay that results from it is frequently miserable. Even the levels that avoid Rememoried's worse design missteps significantly overstay their welcome.

When Rememoried gets away from the platforming it gets more pleasant and interesting. A level that functions like a kaleidoscope was a particular highlight, as was an ominous level where a town seemed to be coming apart. Other levels rely on chasing sounds through a landscape or drifting among stars, and at these times I felt much more in tune with the game's atmosphere.

Rememoried doesn't have anything like a traditional story, and the game's few spoken lines consist of the sort of pseudo-profundities I click past impatiently in JRPGs. As a result, I'm not completely sure I finished it, though the credits rolled. I'm guess I'm not sure that a game can be "finished" when the only goal seems to be to tune in to what's going on in each level.

Despite my issues with the platforming, this tuning in is worth doing. Even the most loathsome level to play developed a marvelous atmosphere using falling moons and a recording of Neil Armstrong. Rememoried's levels have excellent audio and visual design, almost perfectly using touches of color and bits of sound to draw the player in. If the mechanics of play had allowed it, I would have loved to get lost in them…. But that's not what happened.

Rememoried is a deeply flawed and inaccessible title and I can't in good conscience recommend it to anyone. Its central conceit isn't a striking idea, and it mostly results in frustration. The lack of a plot means the game doesn't have any draw to pull the player forward. Yet even when it's at its worst, Rememoried has an interesting atmosphere that can be rewarding. There's something valuable here, but Rememoried gets in its own way no matter where you look. Rating: 4 out of 10


Disclosures: A copy of the game was provided for review by the publisher. The game was played on a home-built Windows 7 PC equipped with an Intel i7 processor, 8 GB RAM, and a single Radeon R9 270X graphics card. No serious display issues were encountered. Approximately 2 hours of play was devoted to single-player mode and the game was (apparently) completed.

Parents: As of press time this game has not been rated by the ESRB. Rememoried doesn't contain anything that should concern a parent and would in my opinion be rated E.

Deaf & Hard of Hearing: Subtitles are available for spoken words, not that these add much to the experience. In several places sound cues are essential for finding the solution to a puzzle and have no on-screen equivalent. It may be possible to solve these puzzles through a great deal of trial-and-error, but it will definitely add a lot of frustration. Warning for epileptic players: Rememoried has a large number of flashing and flickering images (including in the pause menu).