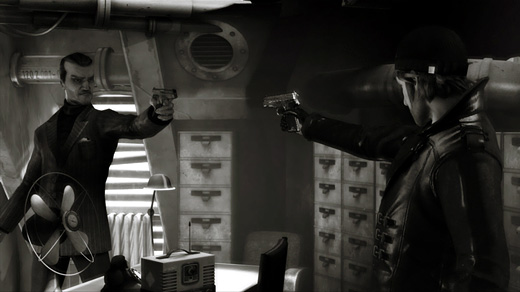 HIGH I genuinely cannot remember a single moment of even mild pleasure.

Once upon a time, I wondered why nobody had transposed the mechanics of a Professor Layton game into a more mature context. Making a mature mystery story where the gameplay hinges around solving puzzles sounds reasonable, almost easy, at least at first. Red Johnson's Chronicles: One Against All provides an excellent demonstration of how difficult it is to actually pull off.

One Against All does a credible job of porting the Layton structure. Each screen of the game features beautifully-rendered 3D environments that the player can examine to find puzzles. Although the puzzles don't have numbers, they're clearly separated from the rest of the gameplay, and the player earns a currency for accuracy and speed. In the true Layton spirit, the player can spend cash to acquire hints to the puzzles, doled out by a secondary character.

Unfortunately, it's difficult to make good puzzles, and Lexis Numerique did not. One Against All has reasonable variety, though the offerings lean a little bit too much on finding hidden images or objects, and overuse the blacklight gimmick. None of the puzzles are particularly interesting, however, and the relatively small number of them makes the several truly terrible ones stand out.

One Against All also has an unusual reliance (for a puzzle game at least) on reflexes. Many moments in the game rely on quick-time events (QTEs), and one of the puzzles hinges on winning an old-school video game. It's not clear who this design choice is meant to serve—few people come to puzzle games to exercise their twitch muscles, and twitch gamers aren't going to flock to a puzzle game just because they'll get a chance to mash the O button.

Integrating the puzzles into the world also poses a significant problem that One Against All never really manages to solve. Layton coasts past this problem thanks to its light, quirky, cartoon spirit, but the realist graphics of Red Johnson force it to imagine some way that its puzzles are integrated into an actual world. Surprisingly little is done with the tools of an actual investigation. Fingerprints can be found and compared, but these steps are usually inconsequential. Instead, almost all of the puzzles are oriented towards figuring out a 3-5 digit number to get past a keypad or combination lock. For some reason the tumblers and buttons are almost always mushy and slow to react, a pointless stab at tactility that only makes the game more irritating to play.

Putting the puzzles in a realist world also has a way of illustrating their own illogic. One early puzzle involves using steam to reveal two digits of a four-digit combination of the mirror. Then, for no apparent reason, Red breaks the mirror, revealing a code burned into the wood underneath that contains the final two digits. Who would do this sort of thing? What good could it do to hide the numbers beneath the silvered glass? Why would anyone suspect this had been done? The attempt to create an immersive world repeatedly founders on such questions.

Immersion is clearly the goal. The environments, though few, are detailed and lively, and the characters are for the most part animated and voiced quite well. They are also universally tiresome and unlikable, up to and including the protagonist. One Against All does a good job of setting up Red's predicament and explaining the backstory (this is the second in a series of what is clearly meant to be at least three games). The trouble was that everyone was so repulsive I had no interest whatever in how things turned out. The only point on which I empathized with Red was in his obvious annoyance at having to continue dealing with these people.

The inescapable problem of puzzle-solving mysteries is that mysteries you solve by doing puzzles are an incredibly silly concept. Trying to mesh that silly concept with an ostensibly serious and mature setting is a tremendous challenge that Lexis Numerique simply wasn't equal to. With its relatively small menu of uninspired puzzles and cast of irritants, One Against All fails in its attempt to capture the Layton magic. Rating: 4.5 out of 10.


Disclosures: This game was obtained via publisher and reviewed on the PS3. Approximately eight hours of play was devoted to single-player modes (completed once).

Parents: According to the ESRB, this game contains strong language, violence, blood, and sexual themes. Several scenes involve characters wounding one another, resulting in big splashes of bright red blood. One character shoots himself in the head on screen. The player character can consume alcohol, and another character is drunk. A female character propositions the main character and describes fetishistic sex. Also, her apartment apparently has lube everywhere.

Deaf & Hard of Hearing: All dialogue is shown as text in boxes. However, several puzzles rely on the player hearing sounds, including one that requires the player to transcribe 25 Morse dots and dashes, and probably cannot be solved unless the player hears how two pipes react to being hit with a hammer in game. Deaf players will probably find this game impossible to complete without assistance.

Your last point [“The inescapable problem of puzzle-solving mysteries is that mysteries you solve by doing puzzles are an incredibly silly concept. Trying to mesh that silly concept with an ostensibly serious and mature setting is a tremendous challenge that Lexis Numerique simply wasn’t equal to.”] is a key to all puzzle game development, and probably also to point-and-click games. For a while, I thought that only comedic point-and-click games (like Monkey Islands and Maniac Mansion) could be done because serious ones are boring as hell and often kinda pointless. For sure, it’s not entirely true, and more “serious” point… Read more »