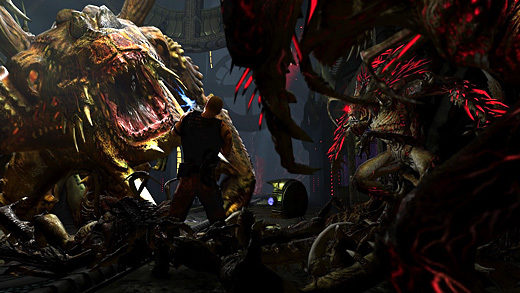 HIGH Bringing a whole structure crashing down on a monster using the magnet gun.

LOW The monster didn't seem to notice it.

WTF Why am I doing so much work to protect force-fields and take out bridges when these creatures are constantly emerging from the solid rock?

I can't help but wonder whether Red Faction: Armageddon

turned out the way it did because of THQ's transmedia strategy. The other partner in that enterprise is Syfy, a cable channel known, in part, for its weekend lineup of C-grade monster flicks. Occasionally a decent film surfaces (most likely by accident) but the bulk of the weekend on Syfy is taken up by poorly-made creature features with bad acting and even worse scriptwriting. Red Faction: Armageddon seems right at home in this dubious tradition. It certainly doesn't seem to fit the series's own.

The Red Faction games have historically traded on "red" as a dual entendre, mixing worker-oriented revolutionary activity with a (usually) Martian setting. Armageddon's story, concerning the appearance of a race of vicious, man-eating aliens on Mars, is a stock sci-fi plot that seems out of place in that universe. Replacing human conflict with giant bugs drains the game of interesting moral ambiguities, without any compensating improvement in gameplay.

Another hallmark of the Red Faction series has been the ability to modify the environment, usually with explosives, and it is woefully underutilized here. As in Guerilla, the weaponry has no effect on rock except in one or two specified places, a weakness that is dramatically emphasized by setting Armageddon almost entirely in underground tunnels. The protagonist, Darius Mason, can fire plasma weapons, explosives, and even miniature black holes in all directions without any danger of collapsing fragile rock formations. That's stupid, which is no particular sin, but it feels stupid in play, which is especially damning since the alien antagonists spend the whole game burrowing through rock without so much as a drill. 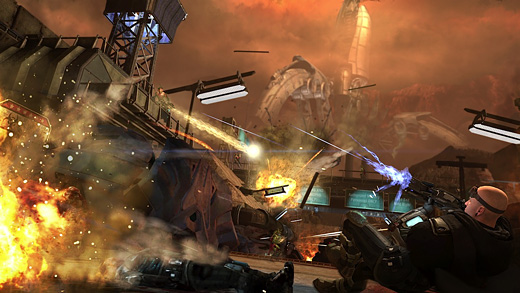 The visual design of the aliens falls into the same procession of generic junk produced by every H.R. Giger wannabe since 1979. Their combat design, on the other hand, further undermines the series's core concepts. The tremendous agility of the creatures makes it difficult to use the limited destructible elements in the environment against them, a problem compounded by the fact that their high mobility makes tactical thinking all but irrelevant. The ability to destroy a bridge is of no consequence when your enemies can jump along the walls and ceiling 40 meters at a time. Moreover, the aliens' tendency to swarm towards Mason berserker-style makes the use of explosives, or even the magnet gun, actively dangerous. That the core design favors the use of an assault rifle over destructive implements is a serious problem in a game where blowing apart the environment is supposed to be the hook.

Of course, if one wants to judge the game purely as a shooter then this is not an issue. Armageddon operates cleanly enough, and aside from one irritating difficulty spike involving a slow ride on an excavator, the progression is pretty smooth. Alas, shooting its aliens became a terrible bore long before the game ended, to the point that I spent most of the late levels simply running past them whenever possible. Some de rigeur vehicle segments appear for a change of pace, but aside from a flying segment they're not particularly fun or memorable.

Being set in tunnels, Armageddon's levels are largely linear and obey an arrhythmic cutscene-shooting-cutscene architecture that has Mason lurching into a fade after every other firefight. They're also dark, for no apparent reason other than to reduce the draw distance. There's no atmosphere to speak of, and not even a basic jump scare, just a vast swath of the game that's so dark you can barely see anything. On the surface, the darkness is conveniently replaced by blowing dust, to remind you that at the beginning of the game the Mars terraformer was destroyed.

That episode feeds into one of the most jarringly stupid plot resolutions to ever insult my intelligence, albeit one befitting the achingly dull, insipid story that came before it. Armageddon lacks even the minor saving grace of winking at its own idiocy. It's all presented so seriously, as if the creators thought the death of one character was a genuinely emotional dramatic moment, rather than a trashy refrigerator-stuffing, or that the game's conclusion tied up all the loose ends neatly, rather than opening up a plot hole so vast and deep that the entirety of the preceding game toppled into it, never to be seen again.

is a perfectly functional third-person shooter, but there's nothing at all to recommend it. The design is incoherent on its own merits, even more so in the context of the series, and the narrative fares even worse. Yet, I sort of suspect that this is what THQ were aiming for. With the glory days of Farscape and Battlestar Galactica fading, Syfy's programming increasingly consists of dumb, poorly conceived, third-rate entertainment, and Red Faction: Armageddon fits that bill perfectly. That's transmedia synergy for you. Rating: 4.0 out of 10.


Disclosures: This game was obtained via retail store and reviewed on the Xbox 360. Approximately 16 hours of play was devoted to single-player modes (completed once) and 0 hours of play in multiplayer modes.

Parents: According to the ESRB, this game contains blood and gore, strong language, and violence. There are a few scenes where people are dramatically killed by the game's monsters, but nothing exceptionally disturbing.

Deaf & Hard of Hearing: Sound doesn't play a significant role in the game, and subtitles are available for all the dialogue. The audio logs don't have subtitles when you pick them up in game, but they are transcribed when you read them from the main menu.