Save a Bullet for Yourself 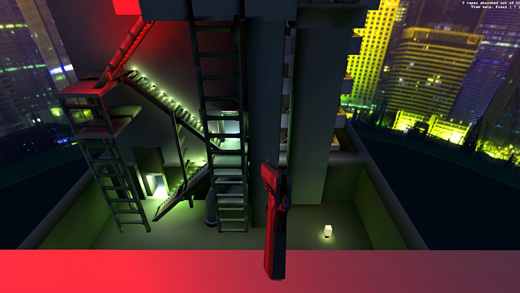 LOW Finding absolutely nothing of use in that room, just like the seven previous.

WTF What's going on in this room full of crystal?

Games rarely consider the details of ammunition. The amount of rounds a player carries shows up as a number in the interface, and reloading requires nothing more than tapping a button. Actually handling and managing the bullets that go into a gun is a complex task, however. Receiver, an first-person shooter (FPS) from Wolfire Games, wants to remind us of that fact. Unfortunately, it never makes it clear why we should care.

Receiver drops the player into a randomly-generated set of rooftop rooms and tasks him with recovering 11 tapes of droning narration (without subtitles) that explain the game's story. The player begins with an unpredictable loadout including one handgun in one of various states and some ammunition. The player may also start with a flashlight or, if his gun is semi-automatic, a spare magazine or two. He must then move through the multi-tiered linear world looking for the tapes, which can be frustrating since one can go through at least nine rooms in a row without encountering a single one. I myself haven't managed to get all 11 in a single playthrough before dying.

The game only has two kinds of enemies: a stationary gun turret and a flying drone, both of which can kill the player with a single hit. Each has some associated visual cues, but most of the time the player will need to hear their alert chirps to know when he's been spotted and when it's safe to move. The distribution of enemies changes, and on rare occasions they can be avoided. Because enemies are difficult to evade and pickups can be hard to see, however, killing everything in a room is generally the only option.

If this all sounds very basic that's because it is—Receiver started as a response to a sevem-day FPS challenge and definitely feels like it, from its spare graphics to its room-entry stutter. The hook for the game is that it presents the process of actually reloading the firearm in a significant level of detail. The HUD has no ammo count, and bullets do not magically fly from the corpses of your enemies into magazines the player can swap out every time he takes a breath. Rounds must be gathered manually and loaded into magazines by hand, with the gun safely tucked away. If there's no spare magazine, the player has to eject the empty, refill it, then shove it back home again. The only way to know the number of bullets remaining is to remember how many have been fired or check by eye.

By explicitly laying out all the steps required to load and prepare the gun, Receiver draws attention to the way that conventional shooters ignore this significant aspect of firearm use. However, this isn't really an interesting thing to do because it's obvious that all games represent physical actions via simplified abstractions. Even QWOP, with its detailed controls for the runner's legs, elides the balancing action of the runner's arms and core, not to mention the necessity of breathing.

The question, then, is not whether games gloss over aspects of physical action but rather whether the details games choose to include are relevant.

Receiver fails to establish that the complexity of gun handling matters. The detailed reloading scheme doesn't speak to the story, the aesthetic, or the other mechanics. Receiver doesn't treat aiming or shooting the weapon with the same carefulness it reserves for reloading, and doesn't fiddle much with the basics of movement, yet running and shooting are the core verbs of the game. By making the world randomly generated, the developers give up the opportunity to design encounters where efficient reloading matters. As a consequence, becoming more skilled with the game's most intricate systems doesn't make a player any more likely to succeed. Receiver's complex gun-handling mechanics are irrelevant in the context of its larger design.

That's a shame, because the larger design has nothing to recommend it. The perfunctory story and low-poly world of Receiver aren't interesting to explore in their own right, much less when one must overcome the game's unforgiving difficulty. The choice to generate the world randomly might add replay value, but it also adds much to the frustration level while costing the game the ability to present rewarding encounters that highlight its unique mechanics. Receiver has a neat idea at its core, but that didn't translate into an interesting game. Rating: 3.0 out of 10.


Disclosures: This game was obtained via Steam purchase and reviewed on a home-built Windows 7 PC equipped with an Intel i7 processor, 8 GB RAM, and a single Radeon 6800 HD-series graphics card. Approximately five hours of play was devoted to single-player modes and the game was not completed.

Parents: As of press time, this game has not been rated by the ESRB. The game does not have any gore or violence against human beings. However, it is a detailed simulation of handling and using a pistol, which some parents may find objectionable per se. I would rate it E10.

Deaf & Hard of Hearing: Deaf and hard of hearing players should not purchase Receiver. As described in the review, survival is practically impossible without hearing the drones. Even if the game were still playable, the tape recordings that constitute the whole of the game's story do not have subtitles, so that part of the experience is permanently denied.