Coulda Used That Pot Of Gold 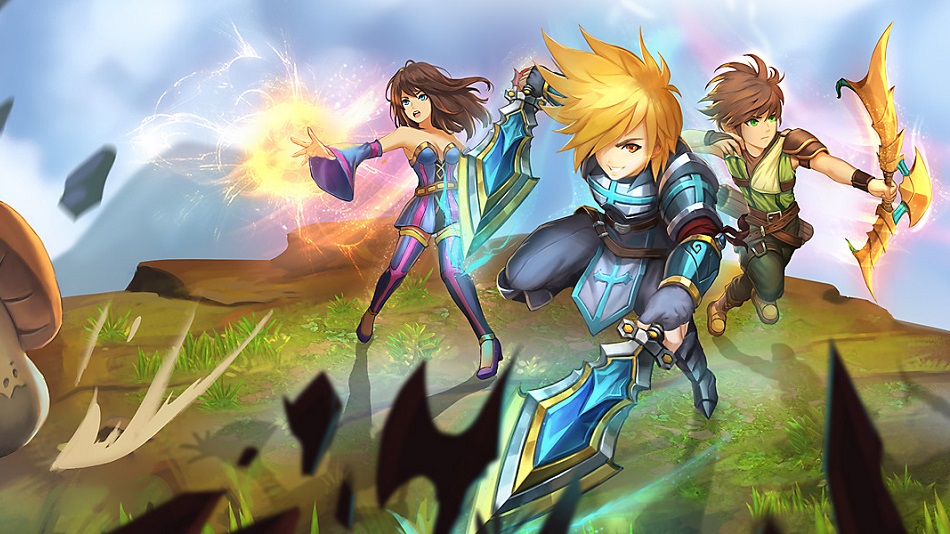 LOW Any fight with more than six enemies.

WTF Who thought all these attack cutaways were a good idea?

Sometimes it’s difficult to figure out exactly what causes a title that should be decent to fall short since games these days often have so many elements that it’s tough — and often wrong — to pin failure on one particular thing. However, in the case of Rainbow Skies there are plenty of suspects, but the culprit is ultimately easy to identify. The poor pacing just kills it.

Let’s deal with the other issues first. Rainbow Skies is a turn-based JRPG that suffers from a dangerously bad story with a deficiency of interesting incidents and characters. The fighter Damion and archer Layne are dumb and smart jerks, respectively, and mage Ashly has no discernible personality aside from being bigoted and inexplicably attracted to Damion. They have little binding them together aside from a miscast spell that prevents the trio from getting too far away from one another.

Some of my favorite RPGs have been built on flawed characters like this, but Rainbow Skies fails to develop any arcs or pay any off. Of course the team eventually realizes the power of friendship, but there’s no noticeable maturation over the course of the game. There’s also a more traditional epic crisis for them to confront, but that plot is both amazingly heavy-handed and hamstrung by a dopey “twist”. 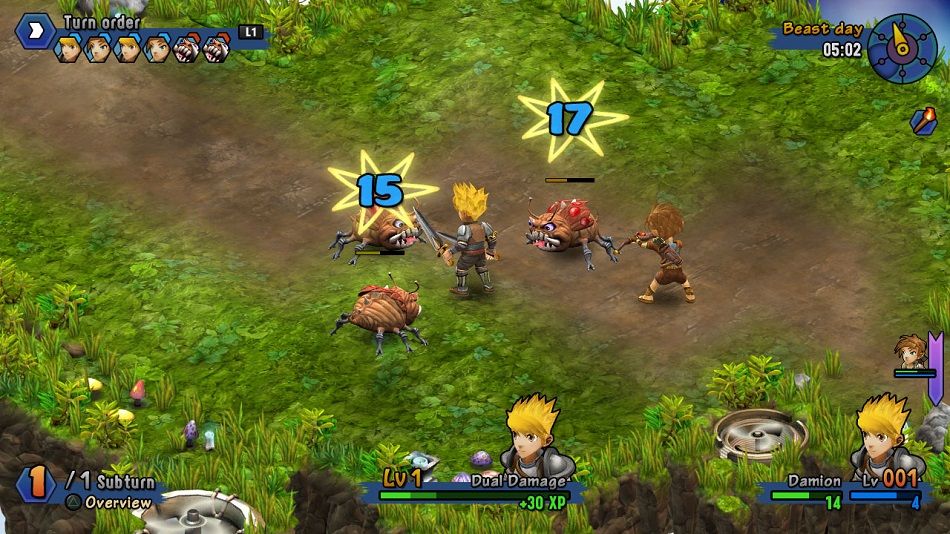 Through most of the campaign the team operates with a deficiency of resources. The amount of money dropped by enemies is tiny in comparison to what’s needed to outfit the party with decent gear, especially when equipping the up to three friendly monsters the team can bring along as allies. The cash drops can be modestly increased by raising the difficulty (adjustable at any time) but even when I bumped it three times higher, the income wasn’t enough to keep pace with necessities.

Rainbow Skies also has a quirk in that leveling up merely gives a small boost to the characters’ HP and MP. To actually improve those parameters significantly, or increase their strength, defense, and so on, the player has to spend “skill stones” dropped by monsters. As with cash, these drops are way too skimpy.

Battle take place on a grid of squares. During a turn, each character or NPC has a set number of actions they can perform. I saw enemies that had as many as 6 actions, and by the end of the game, my main characters could perform 5. They can spend one action to move to or direct an attack towards a single adjacent square. Special attacks may require the character to spend 0-3 actions and generally also consume MP.

Early on this didn’t seem so bad, although it dragged a little bit. Movement across the grid seemed slow, but I wasn’t too concerned. After a short while, I began to encounter enemies with bizarre special attacks — during one, my characters suddenly disappeared from the grid and appeared on a mountain where mushrooms sprouted over them. Within a few hours, most enemy special attacks feature little vignettes of this kind. 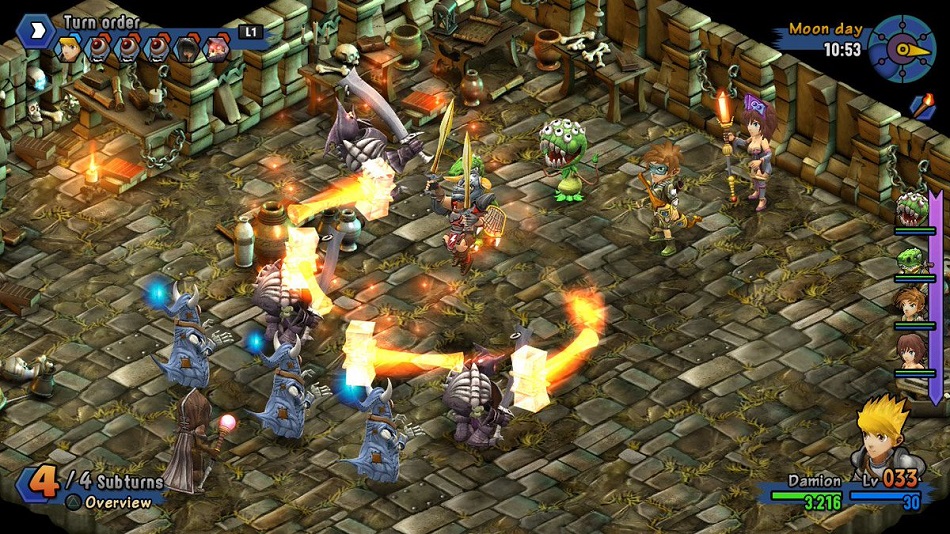 Perhaps if I’d been entertained by these scenes my impression of the game would have been better, but for the most part the attack cutaways were more bizarre than entertaining, and they turned every battle into a slog. The only way to skip the animations is to hold the R2 button throughout the turn, and even doing this won’t skip the first two cutaways. A menu option to skip all animations is desperately needed.

As the number of enemies grew – I would regularly face mobs of over 10 and saw groups of up to 20 foes or more – their number of actions expanded as well, and turns became interminable. This effect was only magnified by the way Rainbow Skies handles turn order. Seemingly dictated almost entirely by the value of a characters’ “speed”, battles would often have long stretches where only the enemies were acting.

The combat system has other serious problems — most prominently that it strongly incentivizes reusing early attacks ad nauseam rather than developing new skills — but the go-make-a-sandwich pacing is what really sucked the pleasure right out of this game. I eventually took to reading a book (literally!) during large fights when I had nothing to do.

Rainbow Skies is hampered by its weak narrative, overly tight economy, and sub-optimally tuned combat. What really kills it, however, is the vast amount of time it sucks up by forcing both the story and the combat to move at a snail’s pace. Rainbow Skies demands a ton of time from the player, but offers nothing of equal value to reward that investment. Rating: 5 out of 10

Disclosures: This game is developed by SideQuest Studios and published by Eastasiasoft. It is currently available on PS4, PS3, and PS Vita. This copy of the game was obtained via publisher and reviewed on the PS4. Approximately 50 hours of play were devoted to the single-player mode, and the game was completed. There are no multiplayer modes.

Parents: According to the ESRB, this game is rated E10+ and contains Alcohol Reference, Fantasy Violence, Language, and Suggestive Themes. The alcohol reference happens only at the very beginning of the game and will be long-forgotten by the end, and in all honesty I did not see anything I thought fit the description of “suggestive themes”. This is definitely fine for 10-year-olds, and I would say suitable for even younger children, if they have the patience for it.

Deaf & Hard of Hearing Gamers: Rainbow Skies has very little voiced dialogue, although there are a few words voiced on entering or exiting dialogue as flavor. For instance, the book merchant always says “Thanks for naught” when you leave, whether you purchased anything or no. The text cannot be resized nor its color changed. There are no essential sound cues. 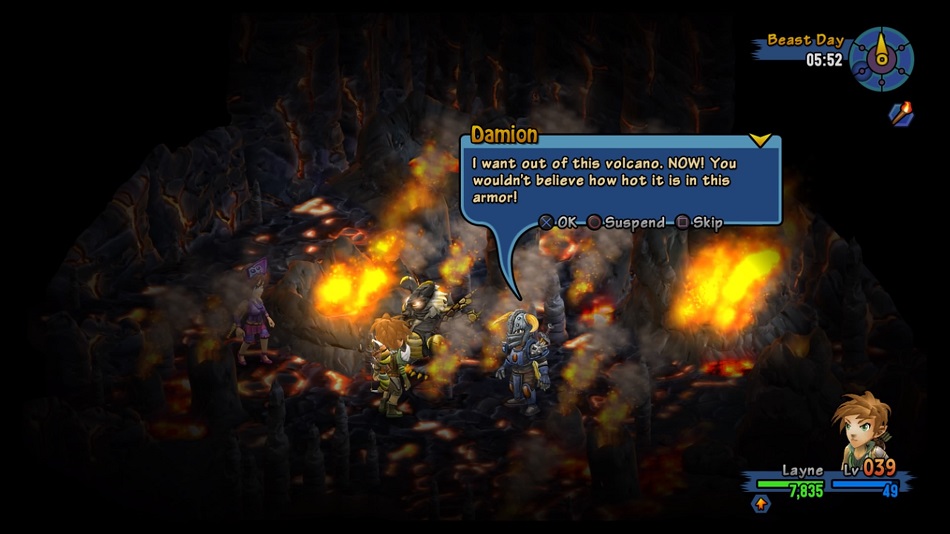 Remappable Controls: No, this game’s controls are not remappable. The game does not include a controller map in its options menu but left stick or D-pad control movement on the field and in combat, and the face buttons are used to open menus and enter commands. R2 must be held to skip animations, and presses or holds of R1 and L1 are occasionally used to request additional information. 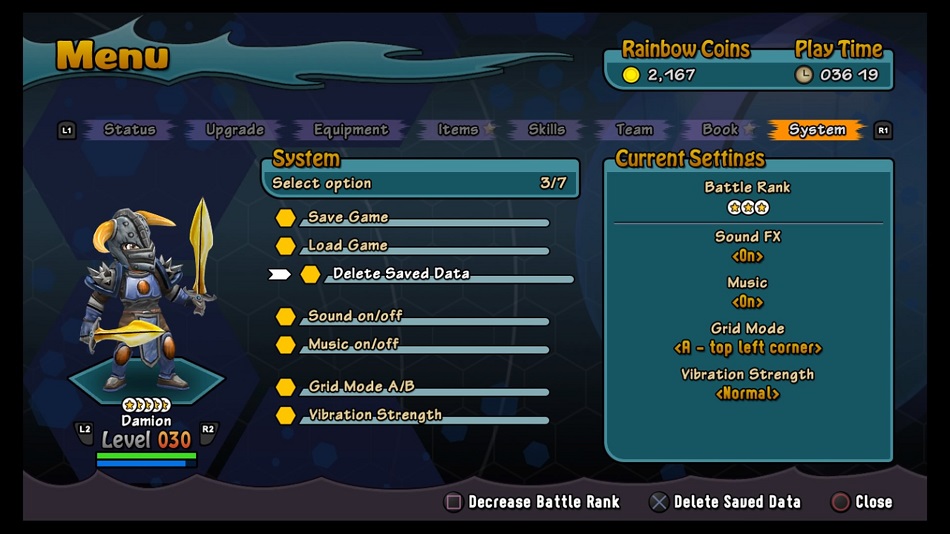