Lost in the Mist 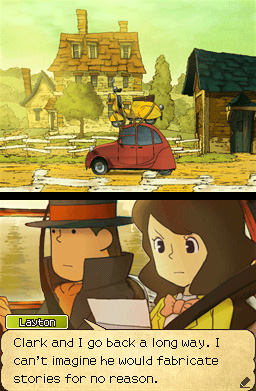 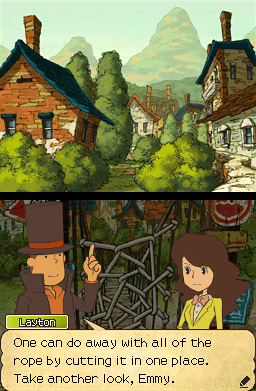 HIGH That moment when a puzzle that seemed to have no answer suddenly crystallized in my mind.

LOW Every single moment of the subplot with Chief Jakes is terrible.

By now Professor Layton's puzzles and top hat are such an entrenched part of gamer culture that it's hard to believe the first game came out in America less than four years ago. With so many entries in a series produced so rapidly, one naturally starts to worry about whether the creative energy can be sustained. Unfortunately, Professor Layton and the Last Specter

does little to allay those fears.

Rather than continue from the story hook at the end of Unwound Future, Last Specter looks to the past, telling the story of how young Luke Triton came to be the Professor's apprentice and sidekick. Naturally, this involves a seemingly supernatural mystery—the titular specter is gradually knocking apart the town of Misthallery. It's up to the professor, Luke, and new sidekick Emmy to figure out what's actually going on.

By now, the core Professor Layton gameplay is a known quantity. Building on the adventure-game framework, the characters wander around the world as the player taps everything in sight with the stylus to make puzzles appear. In Last Specter, the puzzles seemed easier than in the previous entries. The dreaded sliding-block puzzles also make few appearances before the post-game content. In a small number of instances, progress is gated with puzzles, but these generally require attention to detail more than brainpower. Players who get hopelessly confused can spend plentifully available hint coins to learn how to solve each problem.

As with previous entries, Last Specter features extra puzzles accessible from the in-game menu that extend the game. The puzzles based on planning train routes or guiding a fish through an aquarium were an excellent addition, but a fill-in-the-blank "puppet theater" actively diminished my enjoyment. The stories told here were indescribably dull, and because of their linear nature, they had to be experienced repeatedly if I was missing one of the necessary words. Last Specter also featured a strange little collection game that had no discernible point beyond putting one more thing on the menu. 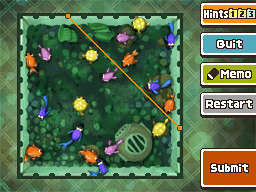 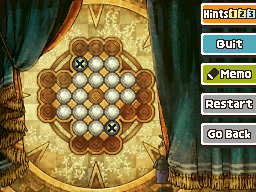 In most territories, Last Specter came with one other sizeable add-on: the "London Life" role-playing game. I did not spend much time with it, but this mode seems to slant more towards life sim than adventure, as befits its name. "London Life" focuses on building wealth (through working at various jobs) and happiness (through helping other people). Considering the limitations of the cart, the depth of this side-game seemed impressive, but its tiny world and slow start meant it didn't grab me.

The main game suffers from the opposite problem, as its world is manifestly too large. Misthallery sprawls out in many directions, and it takes quite a while to get from one end to the other. A taxi service is available to speed up travel, but any player that uses it will surely miss puzzles. Any effort not to miss things will turn each chapter into a full tour of the expansive burg, and this only gets worse in the later chapters that add London locations. The constant looping and relooping through parts of the world that have nothing further to contribute to the story kills the pacing.

That complaint could be leveled at other Professor Layton games in the series, but in their defense, they told better, more interesting stories. Last Specter has an utterly transparent mystery at its core, and the failure of the major characters to catch on made them look like idiots. The villains are incredibly obvious and cartoonish, yet the game has few of the pleasantly bonkers characters and scenarios that were a trademark of the last three installments. Last Specter also lacks in emotional impact, and the moments meant to lend it gravity come across as heavy-handed and cheap. Emmy adds little to the story, and her character seemed so poorly-defined that she came across as something of a Mary Sue.

Professor Layton and the Last Specter

is easily the weakest entry in the Professor Layton canon to date. While the gameplay remains as robust as ever, the surrounding elements don't complement or support it quite as well as they have in the past. I still enjoyed myself, and newcomers to the series will find it a very comfortable entry point. Nonetheless, I felt that Last Specter was missing some of the spark that made the earlier titles great. The series isn't stale yet, but it might be heading there. Rating: 7.5 out of 10.


Disclosures: This game was obtained via retail store and reviewed on the DS Lite. Approximately 22 hours of play was devoted to single-player modes. The main game was completed, but "London Life" was not.

Parents: According to the ESRB, this game contains alcohol reference, mild suggestive themes, mild violence, and simulated gambling. Wow that sounds like a lot, but the reality is that all of this put together amounts to less objectionable content than two minutes of advertisements on prime-time TV. The game is quite clean and has wholesome messages about the importance of thinking clearly and (in the "London Life" mode) helping other people. Parents should have no qualms at all.

Deaf & Hard of Hearing: You should not have any trouble. The game itself is all text and the movies generally have subtitles. The puzzles do not use sound directly, but some lean on knowledge of homophones.