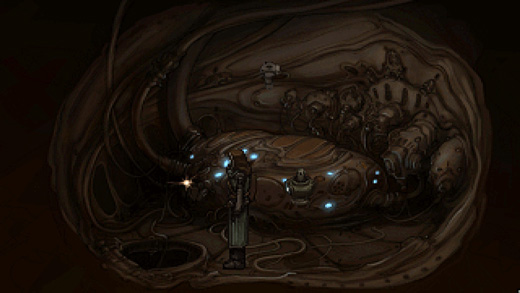 HIGH "I have free will and a maglev unit. And I… am a floating bomb."

LOW Hunting for the right pixel to let me find the power source in the scrap heap.

WTF Why doesn't the portable sensor help me find this power source?

In most games, the apocalypse always leaves a few humans around to have an adventure after most folks are dead. The end of the world may come, but never, it seems, the end of people. That's not so in the world of Primordia. There, humans really did manage to kill themselves off, leaving only the automata they'd constructed behind.

Many years later, Horatio Nullbuilt, a robot with an uncertain past, is forced to leave the airship he has slowly been repairing when an evil-looking bot called Scraper steals its power core. The plot from that point on is actually a straightforward quest to retrieve the bafmodad. Fortunately, that relatively simple tale gets fleshed out with a fascinating backstory about how the world came to be the way it was, during a war between the last human cities of Metropol and Urbani.

It also helps that Horatio, his sidekick Crispin, and the other characters of the game are all well-written. The villain is rigorously honest and logical, yet no less evil for all of that, and the remainder of the cast are written in ways that make them understandable and sympathetic while remaining just rigid enough to appear appropriately inhuman. The sarcastic interplay between Horatio and Crispin is particularly satisfying, although Crispin sometimes supplies a quip that deflates a scene's drama.

Primordia employs typical gameplay for an adventure game. Horatio is a tinkerer and repairer by nature, although that's a strange word to use for a built and programmed entity, so many solutions follow the traditional path of inventory assembly. Most of the time, the logic of the combinations makes sense, and the game takes some of the sting out of running back and forth to gather the right ingredients with an easy fast-travel feature.

Nonetheless, Primordia is much more satisfying when it takes a less mundane approach. One particularly interesting puzzle involves chasing down an AI hidden in an information kiosk by pulling oblique clues from the text it delivers. The puzzle explicates the world as it is being solved, and the game is at its best in the puzzles that play out this way.

Unfortunately, Primordia makes plenty of the same old mistakes that caused the genre trouble. Essential items are hidden in illogical places (a plasma torch in a bed?)  and several crucial items must be found by pixel-hunting across the game's screens. Often, it's not even clear that performing the pixel hunt will be productive, as is the case when a battery must be found in a giant heap of garbage. A simple "getting warmer" alert would have been a significant help, and a button to illuminate interaction points would have solved many of the game's more tedious problems.

Primordia also suffers a bit from the desaturated graybrown aesthetic that AAA games have only just started weaning themselves away from. While the look feels appropriate and is not quite as tiresome in Primordia's pixelated art as it is in high-poly 3D, it still grates after a while. Fortunately the art itself is a delight, from the array of goofy robots inhabiting Metropol to the Gigeresque Goliath buried in the desert.

Much of Primordia comes across this way. The palette is dull, but the art is wonderful. The plot is perfunctory, but the scenario and characters are engaging. The gameplay suffers from longstanding adventure-game issues, but it also contains some of my favorite puzzles from the whole year. Every weakness is compensated by a strength, and while I would prefer to have the latter without the former, I can't complain too much about the overall effect. I found Primordia charming and intriguing, and its mysteries well worth solving. Rating: 8.0 out of 10.


Disclosures: This game was obtained via publisher and reviewed on a home-built PC with an untweaked Intel i7 processor, 8 GB RAM, and a single Radeon 6800 HD series graphics card. Approximately six hours of play was devoted to single-player mode.

Parents: At press time, this game has not been rated by the ESRB. Primordia contains violence between robots and some mild horror elements that may be too creepy for very young children. I would expect a rating of E.

Deaf & Hard of Hearing: All dialogue is subtitled and there are no important sound cues.

As a long-time adventure game enthusiast, I have to say that I, more often than not, actually ENJOY so-called “pixel hunts.” I think there is a definite argument to be made that “show-all-hotspot” buttons are basically a cheat, and deflate much (if not all) of the challenge in the item-hunting aspect of adventure games. I think highlightable hotspots are a reasonable compromise, but they shouldn’t telegraph themselves too obviously (Telltale’s Walking Dead hotspot system comes to mind, though frankly, I wouldn’t really call that an adventure game, per se–more an interactive movie with lite adventure game elements, which basically defines… Read more »