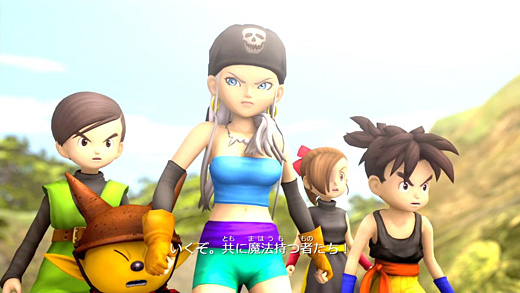 With strong games like Xenoblade Chronicles and Dragon's Dogma blowing dust off the Japanese role-playing game (JRPG) this year, it's perhaps worth looking back at one of the lackluster games that undermined the genre's respect and popularity. Released in 2006-07 as an Xbox 360 exclusive, probably with the goal of helping establish the console in Japan, Blue Dragon has inexplicably spawned sequels and a minor multimedia empire. It's reasonably fun, if you like turn-based RPGs, but Blue Dragon is clearly a bad game.

I think it's fairly well-accepted by now that a game doesn't need to be fun to be good, but I feel it's less accepted that a fun game can still be bad. You can, after all, have one heck of a fun time with a stick, which does not imply that it is well-designed, interesting, or good art. I had fun with Blue Dragon—it even inspired a few honest smiles—but at every moment I was acutely aware that it was crap.

How did that happen with an all-star cast of developers? In some instances, just choosing the all-stars made failure inevitable. Akira Toriyama's character and monster designs, for instance, look like every other thing he's worked on, as if he was mailing in his effort from 1984. At this point, Toriyama's artwork saps a game of its identity, rather than helping to create one. The only memorable art direction here is a bizarre obsession with poo. 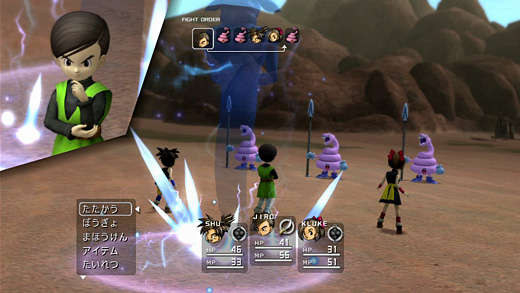 It doesn't help that the world design is rather generic. The game has its moments—Mural Town and the Gul Mountains come across well—but half the duration is spent in snowy or dusty wastelands, and half of the rest in perfectly conventional industrial facilities. In the very last segments, an interesting concept finally appears when the world splits in half, revealing dozens of different cubes that serve as different mini-worlds. Because this happens so late in the game, however, the potential of this setting gets completely wasted, and the player only visits two of the cubes.

Nobuo Uematsu's score, while not as blatantly mailed-in as Motoi Sakuraba's recycling job in Tales of Graces, underwhelms. None of it is especially memorable, except for the jarringly inappropriate battle music featuring an Ozzy Osbourne wannabe droning over excitable rock guitars.

When it comes to story, things get even worse, as the story knocks out cliches in dutiful fashion. The hero belongs to a character archetype I hate, and the supporting cast receives almost no characterization, which leads to some goofy moments when the game tries to build their deep motivations into a plot point. The love story is even more bloodless and stupid than is typical for the genre, and exists mainly so the game can try to build tension by imperiling the love interest (named Kluke, which sounds like a parasite that turns your poo into monsters).

The antagonist (Nene, another terrible name) has no sensible or consistent motivation, and as such the story lurches from episode to episode as dictated by a completely pointless plot, and ends up not resolving anything. The "true" final boss (I am not kidding, it is named "Destroy") is presaged only by a totally forgettable story halfway through the game and therefore has almost no resonance. Also, this boss looks utterly ridiculous looming over the battlefield, its mouth hanging open as if it's preparing to fellate a zeppelin.

Where I did take some pleasure in the game was in the turn-based battles, a system I get to see too rarely in full HD releases these days. As with most turn-based RPGs, Blue Dragon is primarily a director system, but Mistwalker's design increases player engagement and tactical depth by giving the player the actor-style option to charge up spells and certain attacks (Mistwalker would use a similar trick in 2007's Lost Odyssey). This smart move is killed by programming, as I found that spells never charged consistently. It wasn't simply a matter of the optimal target moving around, which is fine, but that holding the charge-up button never gave consistent results, even for the same character using the same spell on the same level. Much of this has to do with an absurd degree of framerate drop. Whatever is clever about the battles is killed by the deficiencies of the construction.

An additional tactical wrinkle comes from a front row / back row placement system, which works exactly as it has in numerous other genre standouts. Where it fails here is that Blue Dragon freely alters this disposition whenever it wants, and in fact did so right before the final boss, offering me no chance to return my party to an arrangement I liked.

This ultimately did not matter because the character development system is ridiculously unbalanced in favor of the player. The main characters have magic shadows that can learn different roles with varied skills, similar to the long-standing job system from Final Fantasy, and once learned, a skill can be equipped even if the shadow is currently using a different job. A separate, weak, job class allows the characters to earn more skill slots. With these abilities it is trivial to create nigh-invulnerable characters that can absolutely shatter any enemy or enemy group. 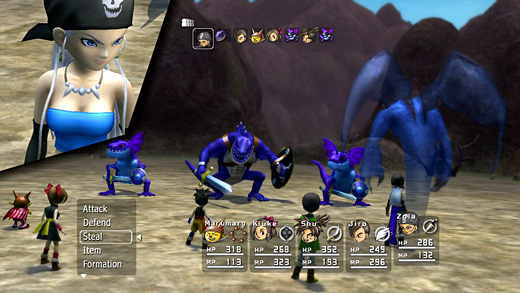 Assembling only skills from the Monk and Magic Swordsman classes, it's easy to create a character who can kill eight enemies at once, absorbing HP and MP that restore him to perfect health, who can also score 2000 points of damage without even getting a critical hit (by charging a magic sword skill), and will automatically counter any attack made on him. Combine that with a few Guardian skills and not only will that character be almost invulnerable, he'll also block any attack on any character in your group. Add on easy-to-obtain accessories that block all status effects, and you have an unstoppable warrior.

You can get four more just as simply, without even engaging in any serious grinding. For instance, although Shu and Marumaro could kill whole mobs single-handedly, in most battles the only character to act would be Jiro, who would go either first or second (because I had leveled him as an assassin), then cast two basic offensive spells (using support and black magic skills), killing everything, and then earn back the MP by running around for a few moments (black mage).

While it can be fun to roll through battles without any serious danger, the fact that the player almost never, after the midpoint of the game, has to worry about tactics or strategy outside of boss battles only exacerbates the engagement issues intrinsic to turn-based systems. The failure of the system to compensate for the player's incredible power makes the game a total bore by the time the last dungeon rolls around, and the only challenge remaining in it is to figure out where you are in that maze using the game's transcendently awful map system.

Generic artwork and world design, forgettable music, generic characters, dull storytelling, and bad design end up turning Blue Dragon into a boring mess that ends anticlimactically due to a meaningless boss and overpowered characters. Even the design features that should work end up not doing so because of the programming deficiencies. It's easy to point to high-profile critical failures like Final Fantasy XIII, but the decline of the JRPG has been a broader phenomenon, featuring many of the genre's leading lights. Blue Dragon's development team featured big names like Toriyama, Uematsu, and Mistwalker's Hironobu Sakaguchi. Yet the game was, like so many of the enemies you fight, a pile of crap.

Okage Shadow King. I bought that game for FIVE DOLLARS and I STILL felt ripped off. The gameplay was soul killing.

Blue Dragon has the distinction of being one of the only RPGs in recent memory that I started and didn’t finish — which is amazing when you consider the sheer amount of crap I’ve rolled credits on.

Completely bland and uninspired. The whole thing reminded me of Okage: Shadow King — only devoid of that game’s minor narrative charm. Kind of a dumbed down game all the way around.

Seriously dude, what is the point of this article? I mean, there are innumerable other things at which you could be pointing your critical lens. Why waste your time and your talent on a totally irrelevant, totally forgotten five-year-old+ game?

Well at least its better than most FF games LOL

The guy’s name is Ian Gillian and he did do vocals for one Black Sabbath album (Born Again). That’s pretty much what I was going to add to this article as well. 🙂

i remember playing the demo. it was one of the very first demo’s i tried out when i joined the 360 fold back in 06. (has it been that long already?)

i didn’t play it for long because, as you stated, it was blindingly uninspired, lazy and generic (and that was just the demo). in fact, i think i might have gone blind had i continued playing it.

i don’t know how you managed to finish that game without losing your soul so i’ll just say ‘i tip my cap to you, sir’.

I haven’t played Blue Dragon, so I can’t contribute anything of value to the discussion. I just wanted to point out that the “Ozzy wannabe” is actually the “Dude from Deep Purple” and quite famous. 😀