The Eyes Don't Have It 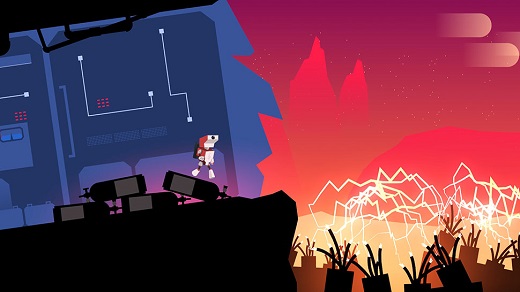 HIGH Bouncing a whole building into a lake of lava.

LOW Jumping along the rotating boxes in the final segment.

In Planet of the Eyes, the player controls a little robot that has crash-landed on a mysterious alien world. Because the engineers that created it were profoundly stupid, uncreative, or both, it's bipedal and lacks any sort of special abilities beyond waterproofing. So off it goes to find the source of a mysterious signal, following a trail of audio diaries left by a low-level employee of the ship that preceded it. Aside from its brevity, there's little remarkable about the journey.

Planet of the Eyes falls into a mold of puzzle-platforming similar to Limbo, in that the main character isn't especially nimble or powerful, there's a great deal of ambiguity about whether objects are background art or interactive, and the rules of the world are almost never explicitly explained. Death will, as a result, occur rather frequently. Planet of the Eyes is (fortunately) pretty forgiving with its checkpoints, so this doesn't count as much of a setback.

Also, Planet of the Eyes isn't quite as deadly as Limbo because although its visuals are spare, it's in full color. Thus, its dangers are usually fairly obvious even if the method for avoiding them isn't. Plants that will eviscerate the robot and eels that will shock it appear in lurid yellow. Dangerous lasers show up in bright red. The color coding isn't a universal signal—some harmless or even useful items are equally brightly colored—but the palette generally proves a useful way to identify danger.

Ultimately, this palette interferes with Planet of the Eyes's attempt to grab onto Limbo's style. Rather than being ambiguous and archetypal, its perils are usually clear and practical. Here's a dangerous plant, there's a pool of lava, and oh look, here are some nodes firing off waves of electricity. Everything that can destroy the robot makes sense on a purely practical level, but this has the effect of making the world seem ordinary and even boring. Planet of the Eyes is meant to take place on an inscrutable alien world, but it lacks any sense of mystery due to its legibility.

The game's focus on puzzles means that the player's reflexes will not be seriously tested for most of its brief running time. The simplicity of the puzzles means the player's noodle won't be tested much either. The rules for every challenge in the game are easy enough to work out within a few seconds, and once this is done the correct course of action is almost immediately apparent.

The one exception to this ease is a late-game segment where the robot must jump across rotating 3×3 grids of boxes while avoiding oscillating fields that will cause it to explode. Here Planet of the Eyes came to rely on a mix of reflex-based action and mid-term planning that felt like an extrapolation of the game's least interesting directions. The crude look and poor balance of this area give it the feel of something that was imported into the game directly from a game-jam prototype, and closing on this note dragged the whole experience down.

Aside from that irritating final segment there's nothing significant to complain about in Planet of the Eyes, but neither is there anything to praise. It has solid action, and it looks and sounds fine. What it lacks is a hook, something for the mind or eye, or even just the reflexes to work over. Without that, Planet of the Eyes is just a competent thing that passes quickly and leaves no impression. Rating: 5 out of 10


Disclosures: This game was obtained via publisher and reviewed on a home-built Windows 7 PC equipped with an Intel i7 processor, 8 GB RAM, and a single Radeon R9 270X graphics card. Approximately 2 hours of play was devoted to single-player mode and the game was completed using a controller.

Parents: As of press time this game has not been rated by the ESRB. Planet of the Eyes contains fantasy violence, as the little robot can die in many horrible ways (although there's no equivalent of blood or gore). With this in mind I would probably rate the game E and advise parents that there's almost nothing to worry about.

Deaf & Hard of Hearing: The audio logs are subtitled and there is no other dialogue. Some obstacles give an audio warning that does not have a visual counterpart. Consequently this game will be more difficult for hearing-impaired individuals. Some danger/safe signals depend on red/green contrast so colorblind individuals may find added difficulty.