So, PAX East has come and gone. I got to meet up with a lot of great folks, like my GameCritics compatriots Chi and Richard, Nels, Matthew, and the phenomenal Mattie, and to reconnect with folks I already knew like Chris, Serah, Eric, Dan, and (all too briefly) Alex and Grant. Also all the people I left out. Unfortunately the wifi at BCEC doesn't work as well when there are a bajillion gamers rocking the joint as it did back when the biophysicists visited, so I was functionally cut off from Twitter. If, as a result, I wasn't able to meet up with you, I'm terribly sorry. There's always next PAX!

At this year's convention, the word on everyone's lips was "pre-alpha". You could not take five steps on the show floor without that phrase sneaking into your ear and insulting your grey matter. Now, this didn't bother me when applied to obvious first-draft code like Bastion's actual initial build. If it looks and plays more or less like it's eventually going to look and play, though, don't toss out the meaningless pre-alpha catchphrase. Just say "we're still working on it". I promise to understand. 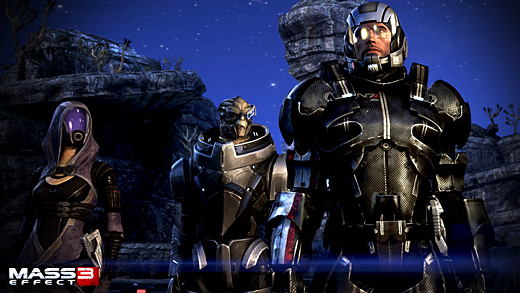 My first stop was the line for the Mass Effect panel, which apparently I didn't need to stand for since Dan somehow managed to walk out of the Dragon Age panel and immediately turn around and duck into Mass Effect. This panel offered some helpful clarification for the large number of journos and commentators who did not read the announcement of new ending DLC closely and reacted as if the world was ending and all art was through forever. No, they are not changing the ending. They are expanding the ending that already exists to provide "additional clarification". Also, there's new multiplayer DLC coming this week for free! Krogan Vanguard! WOOOOOOOOOO!

Kicking off the panel with a list of things BioWare was going to give us for free ensured a relatively pleasant atmosphere and allowed for a few good stories to be shared. The question of Tali's infamous stock photo came up, and Weekes was basically able to deflect it by pointing to the actual face model for Samara, who was in the room, cosplaying Samara. There was also an uncomfortable silence and a blunt "no comment" in response to a question about the Indoctrination Theory. This is understandable, since the existence of the theory is one of the key signs that the writers flubbed the ending in spectacular fashion.

Nonetheless the atmosphere was not, to use the game's favorite word, brutal. Everyone was basically pleasant, and the moments where the controversy showed were mostly uncomfortable silences, sometimes covered by awkward jokes. 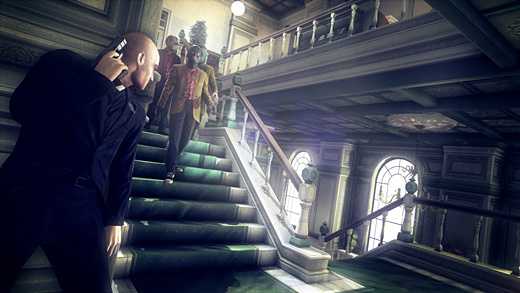 Theme of the Con: Stealth

The convention's stealthy aspect kicked off with a great panel on the subject featuring Nels Anderson, Andy Schatz, and Dan Silvers, chaired by Matthew Weise, also featuring the con's largest single-room concentration of guys in suits. The indie developers covered the bases, discussing how stealth historically hasn't dealt with fail states efficiently, the underuse of deception-style stealth (Spy Party came up but Assassin's Creed multiplayer didn't), critique of the compromises necessary for first-person stealth, and how awesome Thief is in general. Alas, this panel also featured plenty of a major PAX trend: the long, rambling comment posing as a question.

I also wandered over with Chi to check out the demo of the upcoming Hitman: Absolution, which looks like it will at least have the option to play some genuine disguise-based stealth. I believe this was just a public repeat of a demo they did at GDC, showing two runs through part of an orphanage level. The first one featured a lot of knocking guys out, stashing their unconscious bodies in inconspicuous places, and stripping them to disguise yourself, although it revealed a lot of very badly-written dialogue between the thugs.

The second run-through was a guns-blazing affair, and overall I wasn't terribly pleased at how easy it was to survive the storm of bullets. Absolution also features a point-shooting system similar to Splinter Cell: Conviction and Alpha Protocol that is surely good for the lulz but probably less so for solid stealth gameplay. The violent play-through seemed more like Hitman: The Movie: The Game than what I'm looking for in Hitman. Again, it's optional, but if 47 really is as tough to kill as the demo implied then I feel like players will be strongly tempted to just blow their enemies away when stealth breaks down. 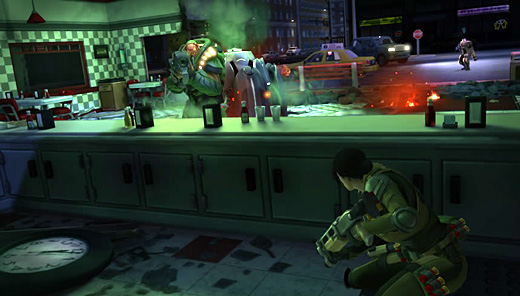 Worst busker: Big dude in Park Street station singing "Wonderwall". If I'd been on that side of the platform I'd have payed him to stop.

I also paid a visit to the X-COM panel, which was a much more reassuring trip. Half the developers said their clearest memory of the original X-COM was walking out of the dropship and immediately getting their team killed, so at least they understand the direction. They also had some humorous comparisons between the original game's enemies and their redesigns. I think the art direction is fine, although I feel like the Berserker enemy mostly exists to attract bro gamers with the promise of some splatter kills. The concept for the base looks intriguing, though it seems like they haven't totally worked it out yet.

I also got a chance to see the demo on the show floor, which I put here because it was a theater-style hands-off demo (a dev played on a PC using a controller). The producer running the show said that they were aiming for Project Dark-style difficulty, which is a decent direction for both design and marketing. As expected, it showed off the Berserker's brutality, but the demo also suggested that dealing with Berserkers was going to be a matter of bringing enough rockets to the fight. Overall, though, it left me with a positive impression that it will be hard enough and interesting enough to live up to the X-COM reputation.

The last panel I got to (unfortunately I missed the Parsely panels) was "Real RPGs", which was a decent review of ways to make tabletop role-playing a welcoming and safe environment. Nothing particularly new was said, and there was not a lot of focus on how to design (or shoehorn in) mechanics to safely explore race, gender, or sexuality, which is what I was really interested in. The next time I see a panel like this I hope it includes something about modding video games to make them more inclusive or mature. That would be a terribly interesting discussion.

Next up: The games!