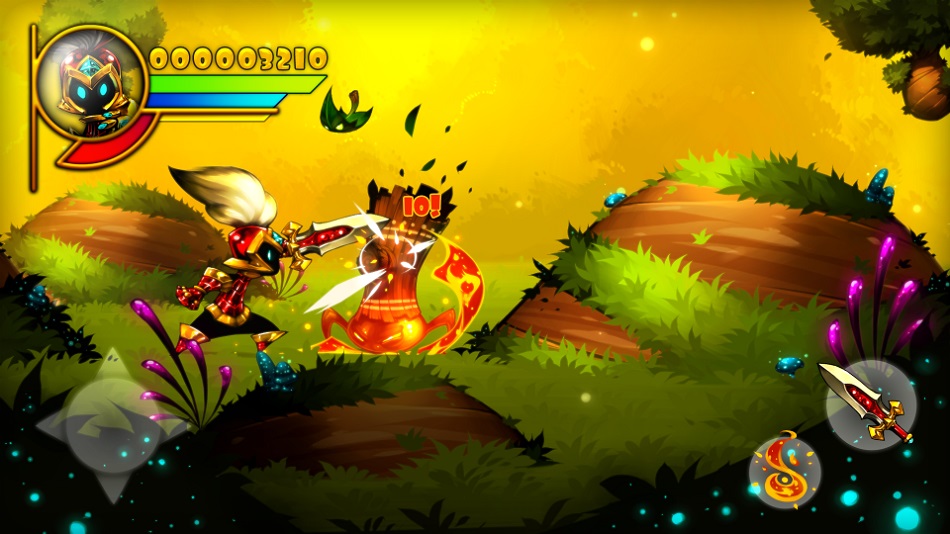 HIGH Jumping back and forth between air streams.

Pankapu tells the tale of an eponymous warrior created to defend the world of dreams from the realm of nightmares. Or rather, someone tells the story of Pankapu to a young boy, illuminating the boy’s own story in the process. The world of dreams is whimsically drawn, bright with color and imagination, and as inviting to the eye as anything I’ve played all year. If this sounds appealing, hold on… Pankapu is probably the most self-destructively difficult game of the year.

The moment-to-moment gameplay isn’t bad at all. Pankapu has three forms that he can switch between, starting off with a basic sword-and-shield warrior type and later gaining an archer and a wizard form. Each mode gains additional abilities as the game goes on. The warrior can smash large red crystals, the archer can float on air currents, and more. Wise use of the special abilities and timely swaps between forms are a key part of getting through Pankapu’s levels. The developers are particularly fond of putting spikes at the top and bottom of the screen and making the player rise and fall by switching between the archer and other forms, often while dodging projectiles or firing at switches, or both.

Although it starts out in the middle of the road, Pankapu‘s levels ramp up in difficulty fairly quickly. Most of the individual challenges, especially at the beginning, are rather minor and all belong to the standard palette of action-platformers — things like spikes, moving platforms, enemies, and so on. Transformations seemed to have a slight lag and the jumping felt a bit floaty, but it wasn’t hard to compensate for those things. When this is working, it feels pretty great to, say, switch forms back and forth mid-jump to combine the warrior’s magnetic armor with the archer’s double-jump and the wizard’s long glide. Cock that combo up, though, and the hero will likely be set back quite a way.

Pankapu spaces its checkpoints far apart, and this leads to a lot of replaying areas after failing the third or fourth tricky bit in a row. This becomes even more of a problem when exploring for extra power-ups. While these are technically optional, ordinary enemies in the late game do enough damage to one-hit-kill Pankapu if he hasn’t been upgraded, so it’s actually necessary to scour the toughest parts of each level.

The apotheosis of this cheap ‘not enough checkpoints’ approach to difficulty shows up in the second boss battle, which is a three-phase fight against a massive enemy that chases Pankapu across a series of intense platforming challenges. At the same time, the player needs to be attacking the boss with arrows or switching to the warrior to smash crystals while dodging boulders, and so on. The third phase actually introduces a totally new mechanic, which of course killed me so that I had to do the whole fight over again because there were no checkpoints at all. 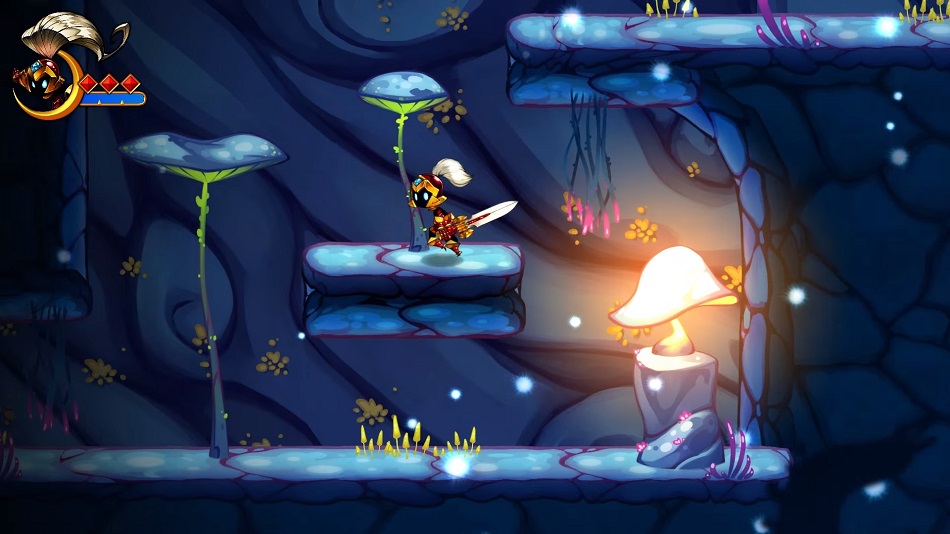 According to Steam statistics, just over 20% of the people who have actually played Pankapu have beaten this boss, and it’s an understandable result given that it’s among the most punishing sequences I’ve played in the past five years.

As the game progresses, obstacles become more difficult and some seem to violate the game’s internal logic. The archer, for instance, can dodge through many obstacles but suddenly not certain lasers. The wizard hovers over the ground, but then sinks into quicksand.

Like my issue with the checkpoints, these broken rules also come to a head in a boss battle. In his wizard form, Pankapu has a special attack that can freeze an enemy, and in warrior form he can raise his shield to block all damage. The third boss, however, seemed to be able to just shrug off the wizard’s attack and strike through the warrior’s shield. I fought through that boss but walked away at the fourth one when I saw that all of my attacks, no matter how powerful, only did one point of damage (out of seemingly thousands).

My main problem isn’t just that Pankapu is difficult, but that it gets there by making design choices that are unfair and cheap. Being stingy with checkpoints doesn’t make a game intrinsically harder, it just punishes the player inordinately for every mistake, or for simply not knowing that the game is about to spawn a tough enemy behind him for a surprise attack. Creating bosses that simply ignore the player’s powers or sponge up damage sure is a way to produce lost time and thrown controllers, but it’s a dubious kind of test. Making a game hard is the easiest thing in the world to do, so if a developer chooses to go that route, I expect them to do it well.

So how does one judge a game like Pankapu? The basic plot is workaday stuff, and its narrative hook is weakly executed, with little apparent cross-talk between Pankapu’s tale and the boy’s. On the other hand, the art and animation are well done, to the degree that they were a major part of what kept me going. So in many ways, Pankapu is competently made. That said, anyone drawn to it because of the story or visuals will be in for a shock.

Difficulty shouldn’t be a problem here. Platformers of this kind have existed for an awfully long time, and the genre is full of touchstones designed to appeal to both challenge-seekers and tourists. That balance is a solved problem, and to ignore those solutions in favor of implementing cheap-shot obstacles invites criticism. Pankapu is bitterly, unfairly hard to the degree that it’s almost unpleasant to play. There’s an audience out there for this sort of experience, but I’m not in it. Rating: 3.5 out of 10

Disclosures: This game is developed by Too Kind Studios and published by Plug In Digital. It is currently available on Mac, PC (Windows & Linux), PS4, Switch, and XBox One. This copy of the game was obtained via publisher and reviewed on the PS4. Approximately 14 hours of play were devoted to the single-player mode, and the game was not completed. There are no multiplayer modes.

Parents: According to the ESRB, this game is rated E and contains Mild Fantasy Violence. The most distressing violence is likely to occur when you smash your controller against the wall.

Deaf & Hard of Hearing Gamers: All dialogue is rendered as text and there are no essential sound cues.

I just walked away from this game after the part towards the end(?) where the Spider-guy companion tells everyone he can repair the tower, so they head to Starry Sands to retrieve some power cells, and then there’s these stupid little enemies who are like Boos in Mario – they only go after you when your back is turned, and they’re only vulnerable to attacks like that. After nabbing this one specific energy cell, the game locks you in a room with two of them, and it turns out that if they also touch you, they steal one of your… Read more »