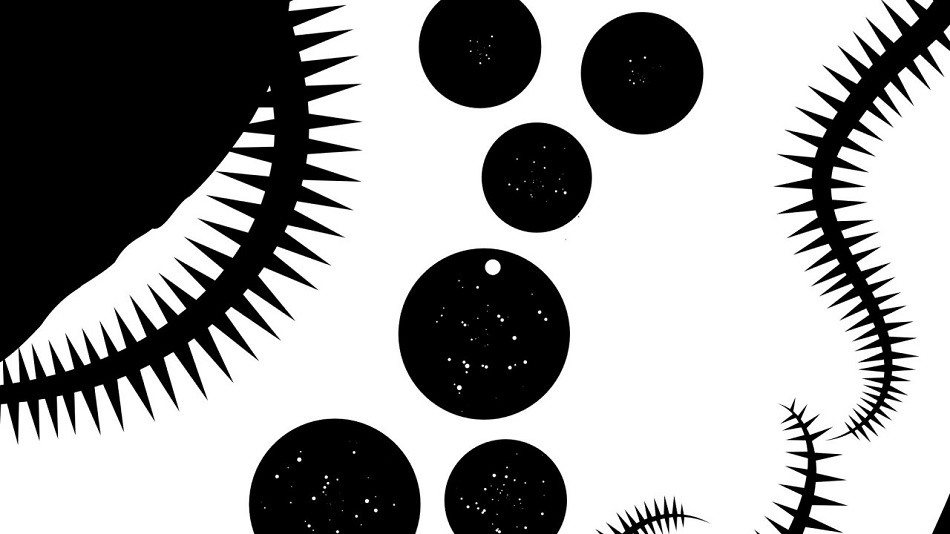 HIGH The first time a level pulls back and reveals its full form.

LOW Oh hey, you reversed the controls. How clever, how droll.

WTF I’m being chased by an eel?

Minimalism is difficult to pull off well. Ovivo doesn’t succeed at it.

Ovivo is a minimalist 2D platformer, by which I mean it gets down to such a basic level that it almost seems like it’s the result of a dare. Levels are in stark black and white, and the ‘character’ is just a little ball with a stem on it, like an escaped Christmas ornament. Ovivo allows the ball to move left or right, and also to switch its color from black to white, so long as there is a background of the opposite color nearby. This also reverses the effective gravity, so that the little ball can “fall” upward, and by timely switches between polarity, jump across gaps or trampoline off appropriate shapes. Hit a boundary that’s too jagged or “fall” too far in any direction, though, and the ball is sent back to a nearby checkpoint.

The fine folks at IzHard make an honest effort to turn this setup into a game but it just doesn’t work out for them. In part that’s because of some sloppiness with the fundamentals — the game’s physics can be quirky and unpredictable, attempts to cross certain boundaries unexpectedly fail, and some edges that seem like they should be safe are deadly and vice versa. 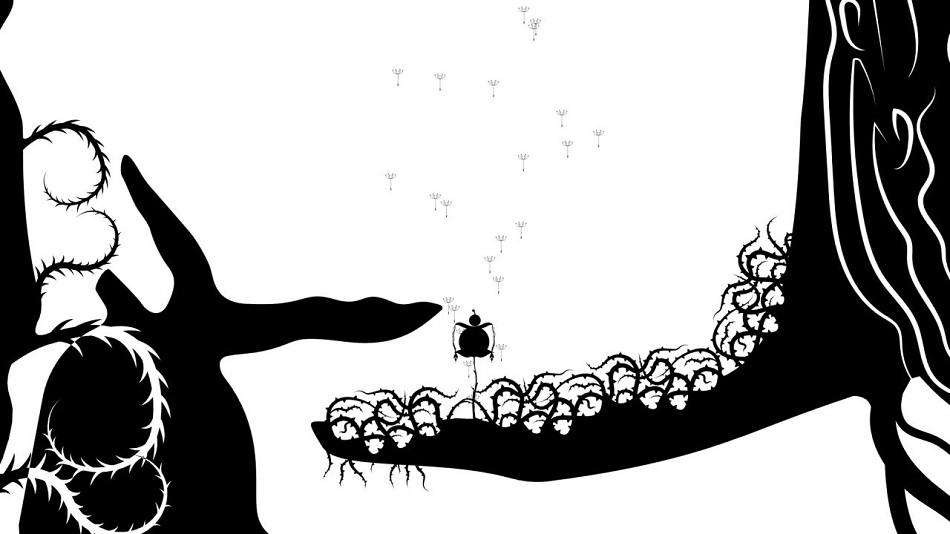 Another problem is that the minimalist core never develops into anything particularly interesting. The devs spool out a few clever variations, like ‘lights’ that automatically switch the ball’s color so that it must be juggled appropriately, and a few borderline unforgivable ones, like a segment that reverses the directional controls for no apparent reason. Even with only nine levels, however, most of the basic concepts feel overused by the end.

In its best moments, as the player flows along the boundaries between black and white, Ovivo feels very chill and meditative. Some credit for this can go to the gameplay, but a great deal must be attributed to the music by Brokenkites. In terms of its successes, Ovivo is as much album as game. However, when the flow stopped and I had to sit around waiting for platforms to move into position, Ovivo lost a lot of its charm. The stark black and white is stylish and effective when the levels are built from fanciful images. When I’m sitting around waiting for the next hexagon to come by, however, the shortcomings of the graphical approach become all too evident.

At the end of each level, the camera draws back to reveal that it was a large piece of representative or abstract art, and these really do look amazing. In play, however, the camera is often zoomed in so far that it’s barely possible to see what I was doing or where I was going. This intense zoom-in also makes it needlessly difficult to explore levels for the various collectibles.

Without a story or even a philosophy to fall back on, Ovivo is forced to stand on its gameplay, its art, and its music. At times, those all sync up and produce a flowing, memorable meditative experience. Mostly, though, the zooming and fiddliness get in the way of the art, or the dull bits of the art get in the way of the experience. For a truly minimalist and meditative experience, ditch the game and just grab the soundtrack. Rating: 5 out of 10

Disclosures: This game is developed and published by IzHard. It is currently available on PC. This copy of the game was obtained via publisher and reviewed on a home-built Windows 10 PC equipped with an Intel i7 processor, 8 GB RAM, and a single Radeon R9 270X graphics card. Approximately 3 hours of play were devoted to the single-player mode, and the game was completed. There are no multiplayer modes.

Parents: This game has not been rated by the ESRB. Ovivo doesn’t contain anything that parents should be worried about.

Deaf & Hard of Hearing Gamers: Ovivo has no dialogue nor any sound cues that I noticed. However, the soundtrack is a major part of the overall vibe and I think a great deal of the experience may be lost if it cannot be heard.

Remappable Controls: Ovivo does not appear to offer any form of control remapping. In principle it can be played with three buttons (two directional keys and the spacebar) but I found that certain menu functions could only be selected using the D-pad when I used a controller.

Colorblind Modes: The game is entirely in black and white and as such does not require any additional colorblindness access features.