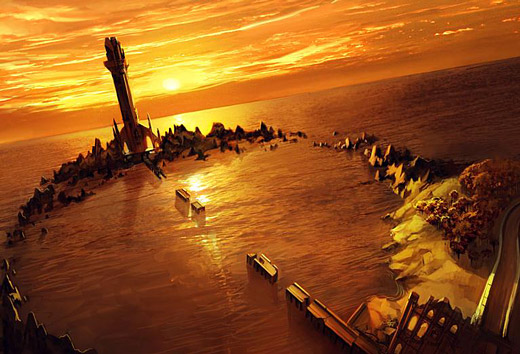 Playing Dragon Age: Origins gave me a relatively frequent sense of déjà vu. Although the game portrays a number of different nations and societies, there are recurrent features that speak to underlying ideas about the psychology of its inhabitants. One such motif is the tendency for its denizens to solve their problems through segregation. At several levels, the people of the continent of Thedas like to resolve issues by pushing problematic groups into isolated areas and pretending, as much as possible, that they no longer exist.

The most obvious manifestation of the segregation impulse appears in the form of the elven alienage seen in Denerim. Here, as in countless ethnic ghettos, the impoverished elves are made to live together in squalor. Walls surround the alienage, keeping the elves in and humans out. Some elves express thanks for this function, and why should they not? When humans appear in the alienage they typically intend violence. The wandering Dalish elves, by contrast, separate themselves from what they perceive as the contaminating influence of humanity through constant motion. Notably, the solution chosen by the humans for the elves of the city is the same as that which the free-roaming elves have chosen for themselves. Though the city elves are segregated in their homes, and the Dalish by their homelessness, the net effect is the same.

Similarly, the Thedans respond to the social and religious challenge of magic by isolating the Circle of Magi in their own remote tower in the center of a lake. There they live under constant guard by church knights, for fear that they will take up forbidden practices or fall victim to demons. While the chief religion of Ferelden teaches only that magic should serve man rather than control him, this idea seems to translate to the masses and the clergy as a warning that magic, and mages, are sinful and dangerous. While magic might be of great use to the people, the Chantry prefers to separate the mages from the population, with the upshot that their normality and helpfulness pose no challenge to the popular conception. Although its mythology suggests that mages were the originators of the darkspawn and the Blight, Dragon Age is not as ambivalent towards the circle's isolation as it is the elves': the oppressive segregation of mages gives rise to two of the game's tragedies, by fueling Uldred's political ambitions and by causing Connor to be left vulnerable to demonic manipulation.

Strategic challenges are also met by the Thedan segregation impulse. A "Blight" begins when the darkspawn awaken an archdemon and spread onto the surface to attack the humans living there. When the archdemon is slain, the darkspawn retreat underground and victory is declared. For the surface-dwellers, this may be so, but when the Darkspawn retreat, it is only to renew an ongoing war with the dwarves who live underground. To them, the Blight is actually a brief reprieve. Here the disadvantage inherent in the segregation approach is obvious: pursuing the darkspawn using the full force of the assembled army could conceivably hamstring future Blights and would at least buy the dwarves some time to rebuild their numbers and society. Yet the surface-dwellers persist in the belief that once the darkspawn are back in their place, the crisis has ended. By ignoring the darkspawn who have been pushed back, the Thedans ensure the continued strength of their enemies, and the continued weakening of their allies, the dwarves.

Yet the dwarves, too, feel the segregation impulse. Their society is built on a rigid caste system, but a significant fraction of their population doesn't belong to any caste and therefore "doesn't exist". These individuals, who are not even allowed to join the regular army, live in a crumbling old section of the city, as rife with poverty and squalor as the alienage of the elves. In contrast to the alienage, however, the castless dwarves have formed powerful criminal organizations. Through the usual means—theft, gambling, extortion, smuggling—these enterprises allow these bottom-rung dwarves to damage the rest of their society. Again, the attempted segregation is an abject failure—disastrous to both the castless and those lucky enough to belong to a caste. The dwarves cling to this failed system nonetheless, because they seemingly cannot imagine any other.

What is lacking from Dragon Age is any sense that the people of Thedas are significantly conscious of the shortcomings of these systems. Certainly they are least cognizant of the most dangerous—their failure to continue the fight against the darkspawn once the horde retreats. Yet each of these systems is social poison, and while isolated individuals speak out against them, there is no organized effort to correct the mistakes. Defeating the darkspawn horde merely removes an immediate threat to a society headed towards an inevitable catastrophe brought on by the dividedness it has chosen to embrace. Maybe that's why it's "dark" fantasy.