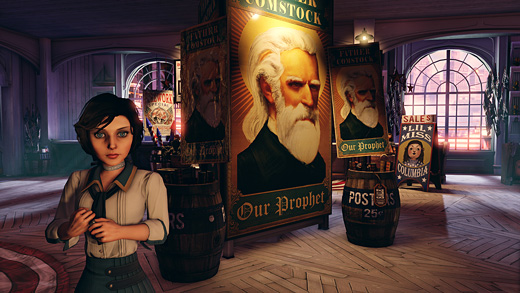 One of the problems with stories that use the concept of multiple universes is that the word "multiple" doesn't even begin to describe the scale of existence. Consider, for instance, the universes in which I just reached through the internet and handed you a cookie (hope you like pistachio sandies!). Now, in the context of known physical laws, this is an extremely unlikely event, so much so that if you were to try to write out the probability by putting down a 1 and writing zeroes in front of it, you could go the whole lifetime of our universe without ever reaching the decimal point. The portion of the possibility space occupied by this event is infinitesimally small. Nonetheless, the number of universes in which I very recently reached through the internet and handed you a pistachio sandy is infinite. The multiverse is an infinity of infinities, which would imply that there are an infinite number of universes where the ending of BioShock Infinite made sense to me. This, alas, is not one of them.

It should be obvious that the following discussion is full of major spoilers for the ending of BioShock Infinite.

In a comparatively large number of universes I am bothered by simple continuity. The Booker DeWitt that Elizabeth brings to the site of the baptism comes there from 1912 and has already lived through the event. Killing him, while probably cathartic for everyone involved, wouldn't erase 23 years of misdeeds committed by the possible DeWitts (ranging from mostly drenched to completely drenched) that walk away from the river. This can only be accomplished by drowning the 1890 version of DeWitt, who is curiously absent during the scene. Killing Booker at the end of his adventures wouldn't seem to do anything to the Booker that exists at the beginning of them.

Of course, the whole ending sequence takes a rather strange view of who Booker is, being as much a (modified) tour of his memories as an exploration of multiple universes. However, the game very clearly establishes that simply entering a new universe does not fuse the different versions of its individuals together. Otherwise, Robert Lutece's entry into Rosalind's universe would be even more distressing, to say nothing of Booker's entry into Comstock's. Indeed, if existing in the same possibility space caused some kind of fusion the lighthouse tour immediately preceding would have played out very differently. So, in order to work, the ending must discard not only the rules that informed the entire preceding game, but also the ones that governed scenes shown just moments before.

In a rather smaller, but still infinite, number of universes, I am more irritated by the asymmetry between problem and solution. Say the Elizabeths drown 1912 Booker and somehow that does cause 1890 Booker to die. Well, rather, it causes an 1890 Booker to die. Just a few minutes before Elizabeth guides Booker back to the stream, she explains that the multiverse has millions upon millions of Comstocks, and it's clear from the land of lighthouses that there are many versions of 1912 Booker running around. Why, in light of these ideas, would we subscribe to the belief that the possibility space of 1890 Booker is singular? Rather, there are millions upon millions of 1890 Bookers, and drowning just one of them should not trouble the infinite number of Bookers and Comstocks descended from a man who visited a river in an uncountable number of alternative universes. 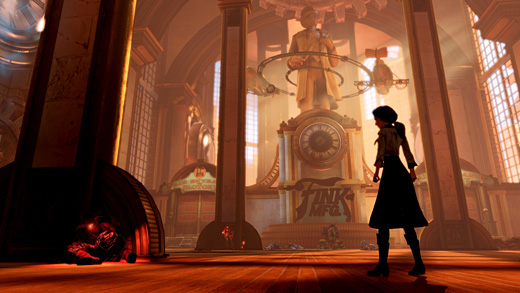 Granted, Elizabeth does discuss "constants and variables," but as the Lutece's coin-flip tally shows, the constants are not singularities of events, but rather multiple appearances of a similar event in similar contexts. Elizabeth implies that the BioShock games are two instances of the same event in vastly different contexts, and perhaps this linkage explains why so much of Rapture found its way into Columbia.

A diagram in the game implies that the multiple universes of BioShock Infinite form by branching, rather than existing timelessly in parallel. This suggests a solution—go back far enough, and you could find a branch point that safely and completely eliminates Booker DeWitt. But how far back would one go? If an infinite number of Booker DeWitts reached the stream, then a slightly smaller but still infinite number of Booker DeWitts were born. You could smother a baby a minute for 50 years and still not eliminate all the Bookers from universes where the 11th day of the week is named Bunzday (after Dan Bunz, whose heroic goal-line stand saved the earth in the Transtime Football Wars).

What if we eliminate Booker's mother? There's an infinite number of her, too. The problem is not really reduced by climbing back up the family tree, because the numbers involved are so large. The collateral damage, however, for trying to address matters by offing Booker's great-great-great-great-great grandmother is likely to be enormous. You're not just taking out Booker DeWitt, you're eliminating hundreds or more people (per universe) who are barely related to him. The number of possibilities only gets manageable in the few instants immediately following the Big Bang, but lopping off branches of the causal tree here involves mass murder on a scale that makes Comstock's ambitions look trivial.

In an even smaller, but still infinite, number of universes it bothers me that BioShock Infinite doesn't pay attention to its own ideas about Booker and Comstock, or the multiverse in general. The multiverse is not the land of "or," it's the land of "and." In a single universe, either Booker walks away from the stream as himself or gets dunked and becomes Comstock. In the multiverse, Booker walks away and he gets dunked; these possibilities merely occur in different branches. If Booker gets in the water and drowns, therefore, this does not eliminate any branches, because the very nature of the multiverse denies the possibility of exclusivity. Drowning Booker merely generates a new branch of reality alongside the other two. The infinity of Comstocks are still visionary genocidal maniacs, and the infinity of Bookers are still drunken, dissipated jerks.

This isn't to say that Elizabeth's action is pointless; it generates a new set of universes which are likely better off for having no version of Booker DeWitt within them. Of course, these may be the universes that instead contain Andrew Ryan.

The ending of Infinite still works, on an emotional level. Although the studious player will find plenty of hints on a second playthrough, Ken Levine makes the wise choice to hold off the game's big twist until its final seconds, where it lands with maximum impact and minimum time for processing. By the time the player has gotten over the shock of the moment, the last piano note plays and the game cuts to black. The realization that BioShock Infinite ignores its own timeline, its own descriptions of the multiverse, and the very logic that underpins the entire story to make that ending work doesn't hit until some time later, if at all. So, in some small but infinite number of universes, I'm not bothered by the ending at all, and this post is a discussion of things I could have found wrong with it. For the people living in those universes: I hope you liked that pistachio sandy.

I didn’t take away the multiverse exposition from the game, because for me, it made better sense as a riff on quantum theory. It’s sort of like the wave/particle behavior of light, and the Elizabeth in BI is a wave Elizabeth of all possible paths (realities) until she acts (by killing her father)at which time she collapses into a particle Elizabeth with one outcome, which removes the infinite infinite conundrum and all other paradoxes. The final Elizabeth is the “real” one, and everything before her creation could’ve existed but didn’t.

[quote=Sparky Clarkson]the game very clearly establishes that simply entering a new universe does not fuse the different versions of its individuals together.[/quote] Simply entering probably does not. But think, for example, of Chen Lin, the weapon smith at Finkton. When Elizabeth creates a new universe and enters it together with Booker, we indeed see a merged version of him who still talks about the machines in his workshop even if they are not there in this reality. Unlike the apparatus the Luteces use for crossing realities, perhaps Elizabeth is capable of more than just entering other universes, especially with the… Read more »

Thank you! I finished the story a few hours ago, and have spent the last few hours reading up on it. (I do think the game deserves a bit of respect for at least provoking some thoughtful discussion.) When they started talking about multiple universes near the end I got so fed up with it, I was rolling my eyes the entire ending. When you base a story around time travel and parallel universes with so many different things happening, you create paradoxes and chains and cause and effect scenarios, and it gets so stupidly confusing. I felt it was… Read more »