You've Seen it all Before 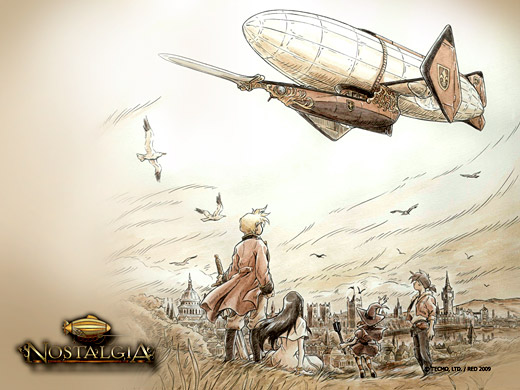 WTF I can't use an item because you broke my gun?

If nothing else, Nostalgia is perfectly named. Here we have a game that delivers classic turn-based combat, with a story full of tropes characteristic of the Japanese role-playing game (JRPG), delivered by characters plucked straight from the JRPG persona stockroom. In form and lack of sophistication, its plot resembles classic adventure novels. In terms of its narrative and its gameplay, it is a throwback to standards the JRPG is fitfully evolving away from. Unfortunately, in choosing to evoke our memories of previous games and stories, Nostalgia forgets to form its own identity.

Nostalgia concerns the relatively uncomplicated adventure of a group of stock JRPG characters. We have Eddie, the privileged son of a rich adventurer, Pad, the poor orphan from the London slums, Melody, the brash club-wielding wizardess, and Fiona, an amnesiac clad all in white who possesses mysterious magical powers. By this point Skies of Arcadia fans may recognize some similarities. In their airship, the teens travel what appears to be an alternate Earth from the late Victorian era, visiting exotic locales such as Cape Town, Delhi, and Rio de Janeiro, where nobody dares to complain about the racial and social injustice of the British Empire. This is a simple adventure tale, after all, with limited moral ambiguity and enemies who are generally monsters rather than the people they appear to be. In its outline, if not its particulars, this will all be quite familiar to JRPG veterans, right down the garbled mishmosh of mythology (a hash of Greek and Norse legends) used to explain the world-threatening catastrophe that the spunky teen heroes must avert. It's a bland little tale, devoid of suspense, and at the end of the day practically everyone comes out okay.

Along the way, Nostalgia delivers some sharply-executed turn-based combat. Battles play out practically the same as in Final Fantasy X, down to the portrait list telling you whose turn will be coming next. It's a clean, transparent system that's ideal for this style of combat. The character and enemy models are reasonably entertaining to look at while you select your attacks, although the more detailed enemies get a bit muddled due to the resolution limitations of the DS display. The player can customize the characters to some extent by selecting which of their skills to get or emphasize, which are leveled up using a shared pool of "SP" earned in combat. The only shortcoming of this system is that there is a cap on the amount of unused SP you can have at any time. When you are saving up SP to get the more expensive skills it's easy to reach this cap without realizing it, in which case the SP you earn by fighting vanishes into the ether. 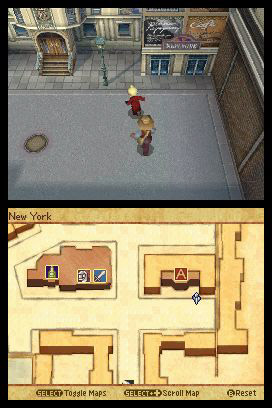 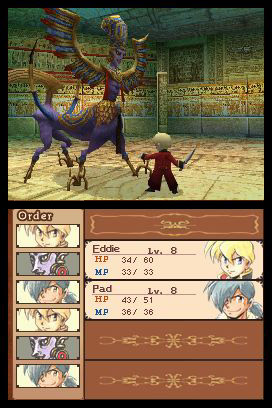 On the ground, the difficulty curve for combat is quite gentle, and a player can probably defeat the story's final boss without much difficulty even if he doesn't sample any of the numerous side-quests available during the main narrative. In keeping with JRPG traditions, the game can only be saved at particular locations in a given dungeon. In some cases the placement of save-points is quite unforgiving, but in others (such as a hub-and-spoke dungeon late in the game) it's less noticeable and irritating. While exploring the towns or traveling in the airship, however, the player can save anywhere, an option that will see much use because the air combat is absurdly difficult and tedious.

Although it uses essentially the same battle system as on the ground, the difficulty curve for aerial combat is very steep. The player is meant to have some control over this difficulty, but things don't really work out that way. Even at low altitudes, where the foes should be easiest, the player's Maverick airship will be totally outclassed by many enemies unless he obsessively purchases expensive upgrades at every opportunity. At medium and high altitudes, which the player must traverse in order to advance the story, the player will frequently find himself in battles that cannot be won, or even escaped. The winnable battles drag on interminably, because many of the enemies have enormous life bars, even at middle altitude, and often yield too little in the way of experience or money to replace the numerous expensive healing items their battles require. Moreover, opposing monsters and airships can too easily inflict overpowered status effects that incapacitate the Maverick's various weapons and also the character's ability to use items or non-weapon abilities. In light of all this, air travel becomes a cautious affair in which the best course is to save constantly and just reset rather than fight if you hit an enemy that's too tough.

That's a shame because Nostalgia generally does a good job of encouraging the player to explore. An in-game notebook keeps track of how much of each game map has been filled in, with predictable effects on completionist players, and one side-quest involves traveling all over the world looking for sites of interest. In this way it resembles another airship game, Skies of Arcadia, although Nostalgia has nothing approaching that game's bizarre and wonderful geography. The closest it comes is in oddly misplacing some locations—for instance, Teotihuacan somehow gets situated in the American Midwest. The player's urge to explore, however, is quite firmly opposed by the difficult aerial combat. You can keep exploring the world after you save it, but it's so irritating to fly you might not want to.

Nostalgia cheerfully opts to evoke our memories of other RPG experiences, most notably Final Fantasy X and Skies of Arcadia, but because it lacks the coherence and originality of its predecessors it never develops an identity of its own. Despite its limited cast, its characters never grow beyond the archetypes they're meant to remind us of, and the overall plot never feels like more than an outline intended to deliver our heroes to dungeons x, y, and z before the obligatory final battle. The difficulty imbalance between the game's primary exploration modes only adds to the muddle: the ground battles are too easy to interest an RPG veteran, but the air battles may be too tough and frustrating for novices. Yet, for all that it lacks originality and flair, Nostalgia has solid execution and plenty of charm. Those who gaze upon the turn-based RPGs of yesteryear with rose-tinted glasses will likely find it an enjoyable diversion, pleasantly evocative but not memorable in its own right. Rating: 6.0 out of 10.

Disclosures: This game was obtained via retail purchase and reviewed on the DS Lite. Approximately 25 hours of play was devoted to single-player campaign (completed 1 time) and some post-game content.

Parents: According to the ESRB, this game contains mild fantasy violence. Parents will likely find nothing to offend. The violence is bloodless, the language is clean, and the romance is exceptionally light. The game's prudery matches its setting: Eddie's parents actually have separate bedrooms.

Deaf & Hard of Hearing: You won't be missing anything. Although the music is nice, it's not essential and there's no voice acting nor any essential sound cues.