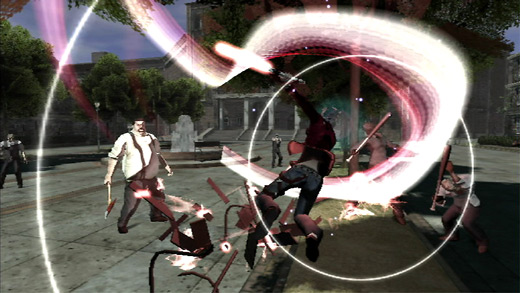 LOW The dumbbell-punching minigame you play to build up strength.

No More Heroes 2: Desperate Struggle has the unenviable task of living up to the legacy of the most fascinating game available for the Wii, and perhaps the most interesting game of this console generation. Note that I did not say "best," because by most measures No More Heroes was an uneven gameplay experience, despite being intellectually stimulating. That game's artistic point, however, was almost inextricably bound up in its awkwardness, so that the audience could not be broadened without losing or changing what the game was saying. For a person who values an accessible experience with minimal interference from seemingly pointless game constructs, Desperate Struggle represents a significant improvement over its predecessor. For those who thought the original's more criticized elements were actually doing something daring and interesting, the sequel will have lost much of No More Heroes' punk spirit.

No More Heroes was out to confront the player, to undercut the power fantasy at the core of the gaming experience. The player's avatar—Travis Touchdown—was a romantically inept loser who escaped from the banal existence of working degrading jobs in the bland city of Santa Destroy into a fantastic series of amazing fights against colorful assassins. Yes, that guy was a symbol of you, the player, and the game meant to throw the drudgery of that everyday existence and the escapism of the assassin fights in your face. But that attitude has vanished from this game, which challenges the player in a strictly conventional way by ramping up the difficulty. The city has become a plain map interface, the degrading jobs have been replaced by colorful and charming 8-bit homages, and Travis…

Well, now Travis is the man. His face is on the flag of Santa Destroy, and he has become a living legend. Women want him; men want to be him. The only problems in his life are his overweight cat and the fact that somebody cut off his best friend's head. So Travis has to rise to the top of the assassin's rankings once more so he can take down the man who ordered the hit. 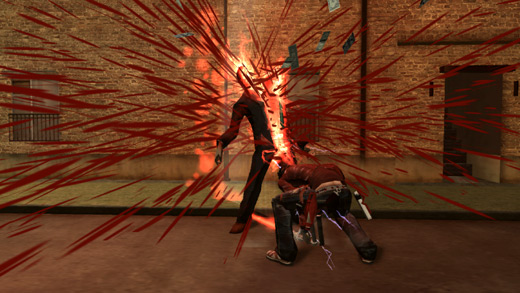 A quest for vengeance is the stuff of epic bombast in a way that a quest to impress a girl is not, yet the boss fights in Desperate Struggle are emotionally diminished relative to its predecessor. In part this is because the first game used longer levels, often inhabited by unique enemies, to help introduce the boss characters and their venues. Here, the levels are generally short, and the top-ranked assassins rarely say anything of interest before Travis slays them (although some have a bit to say afterward). Often we only learn their names after they have died, and sometimes we aren't even granted that: more than 20 of them, cheerleaders, perish namelessly in one fell swoop of a giant robot's lightsaber.

That last phrase should reassure fans of the original that some of its outrageous outlook survived the streamlining, and there were other times where the original's spirit showed through as well. At one point, Travis takes a long, seemingly pointless ride down an empty highway on his motorcycle before he fights a lost cosmonaut in a crop circle. The ensuing battle, tough but legible, ended beautifully, and at that moment I felt like I had a handle on something worthwhile. But for the majority of the game, I was just fighting legions of the same enemies in places that didn't matter to reach bosses that were designs rather than characters.

None of this makes Desperate Struggle a bad game. The variety of enemies, as well as an apparent weakening of Travis' abilities, means that the combat has gotten a bit more tactical and interesting. The wrestling and finishing moves are as satisfying as ever, and retain their blood-spurting charm. The bosses consistently provide interesting and inventive fights, as well—relative to the original they may lack character, but that still leaves them miles ahead of most other brawlers. It's not all sunshine and roses, unfortunately. In some fights the camera will become as much of an enemy as the assassin Travis is facing, and of the two on-bike segments, the first is very poorly implemented. Most of the bosses don't play fair, especially the top-ranked fight, and that certainly got me frustrated at several points.

Yet I think that much of my frustration was born out of my expectations. What I wanted was for this game to be as intense and creative as the original, and that just wasn't going to happen, given how unique that first game was. As he introduces himself, the final boss of this game explains that his vendetta is the result of Travis' actions in some of the first game's least interesting missions. Desperate Struggle plays like an overreaction to the criticism of those segments. Here we have a game that has streamlined itself, stripped away every inconvenient impediment to mass appeal, and in that cleansing has lost something vital. It's still very good, but what hero aspires to "very good"-ness? Rating: 8.0 out of 10

Disclosures: This game was obtained via retail store and reviewed on the Wii. Approximately 15 hours of play was devoted to single-player modes (completed 1 time).

Parents: According to the ESRB, this game contains blood and gore, intense violence, partial nudity, sexual themes, and strong language. Decapitation and dismemberment occur regularly, complete with fountains of blood. The Bizarre Jelly game/movie and Shinobu's save mechanic depict adolescents in overtly sexual ways. The various swords are used as a substrate for a cavalcade of dick jokes. The gym training mini-game gives you points for fearing gays, which I guess will be really funny to some people.

Deaf & Hard of Hearing: Subtitles are available, but audio cues are very critical to some fights. In particular, the final boss has a teleportation attack pattern that requires dodging in time with a high-pitched noise. Other bosses announce their attacks with various sounds. Visual cues are also present for most attacks, but as bosses can often strike the player from out of view, poor hearing can be a significant disadvantage.