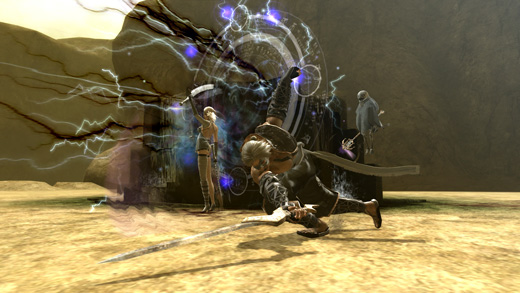 HIGH Walking from third-person combat into a text adventure game.

LOW Some overly-melodramatic cutscenes in the… Oh, who am I kidding, it's the fishing.

WTF Walking from third-person combat into a text adventure game.

Nier is a strange beast: a seemingly disjointed patchwork of play motifs built onto a "Japanese" role-playing game backbone. Nier, its protagonist, is also a strange beast: a beefy, ugly fellow less interested in saving the world than taking care of his daughter Yonah. Both Nier and Nier violate the conventions of JRPGs in many ways, which is precisely why the game is such a success.

Most obviously, Nier adopts a different scale than the typical JRPG. Its world is very small, composed of less than a dozen unique areas and only four dungeons. While this design doesn't provide much in the way of variety, it allows the player to quickly master almost every environment so that the whole world becomes a familiar place. Nier also keeps its party small and focused by contemporary standards, growing it slowly from two to four characters over the course of the first half of the game. The game takes full advantage of this approach, developing a natural relationship between its principals.

Finally, Nier scales down the stakes. Although the game depicts an incredibly grim world, The protagonist is not really interested in saving it. All he wants to do is to save his daughter, first from disease and then from the creatures that have captured her.

A typical JRPG would support this quest with an enormously talky flashback cut-scene or ten showing awkward and unintentionally alienating interactions between Nier and Yonah. Instead of bogging itself down like this, Nier constantly keeps Yonah in the player's mind by putting her personality on display. The game's loading screens almost always show the player entries from Yonah's diary. While these snippets are generally short and simple, they expose a charming and loving personality. They convince the player to like Yonah and want to save her, even as they serve as a consistent reminder of Nier's ultimate goal. Her presence through these screens helps keep the quest focused, and the player's desires aligned with the main character's.

The protagonist himself is an uncomplicated, brutish fellow. Although he generally has good intentions, the scope of his abilities runs little further than killing monsters. Primarily, Nier uses a simple, but effective, third-person real-time combat scheme to let him do this. The efficient setup, however, allows for surprisingly diverse play, as Trent emphasized in his review of the game.

The number of reinterpretations Nier layers onto its core mechanics is genuinely impressive, and includes styles familiar from Legend of Zelda (on which point you should read Chris Green's excellent commentary), Resident Evil, and Diablo, along with some unique ideas of its own. Notably, these never feel out of place or like pure gimmicks—they represent a ludic language intended to evoke a particular atmosphere in a particular place, just as certain kinds of angles and lighting constitute a cinematic language for film. 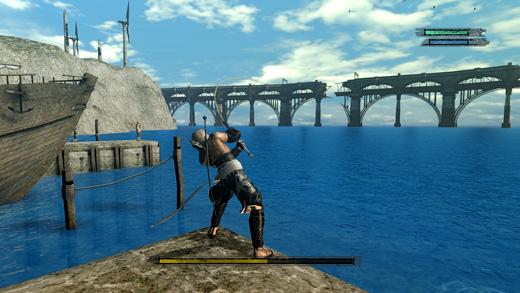 Nier uses this diversity of game styles to keep your interest while it's introducing the characters. Instead of weighing itself down with interminable expository cut-scenes, it lets the gameplay keep your focus while Nier's (and the player's) relationship with the secondary characters grows. It helps that they subvert stereotypes themselves. There's both a delicate female, and a magic-user with an amazingly sunny and loving disposition. Ordinarily these would be the same person, but in Nier the former is an impossibly foul-mouthed, aggressive fighter and the latter is a ghastly skeleton creature. Only when these characters have been properly introduced does Nier let their stories start taking over.

As a result, about 2/3 of the way through, the nature of the game changes. While it revisits some of its unique takes on the possibilities inherent in its engine, Nier doesn't introduce any new permutations. Instead, this last part of the game is character-driven. Each member of the supporting cast is put through the wringer against the steady backdrop of Nier's unwavering, bloody-minded quest for his daughter. Even when a party member accidentally destroys a town, the man shrugs it off. "You saved us," he explains, knowing that only the quest for his daughter matters.

In showing us this side of Nier, a man who "only know[s] how to kill things", the game chooses to make its protagonist relatable rather than admirable. Nier's new game+ mode, which only covers this last third of the game, plays this angle up by presenting Nier's enemies in a more sympathetic light. Unfortunately, the replay hews too closely to the classic JRPG format, using its cut-scenes to tell us a backstory rather than showing characters' evolution as it happens. These cinematics also take such a sympathetic view of the antagonists that they seemed almost disingenuous. Nonetheless, they make the point that Nier isn't necessarily a good guy. Yet, almost every aspect of the game serves to bind the player and the character closer together.

The small scale of the world makes it as familiar to the player as it is to Nier himself. The diary entries keep Yonah as present and lovable for the player as she is for her father. The stellar writing and sparkling voice work give the small cast lively personalities and interactions that seem as natural as those of your own friends. And, for all the permutations the game makes to its systems, all the player can really do with those tools is kill.

If the core of the Western RPG is letting the player shape a character to his liking, the core of the JRPG is to convince the player to see himself in the immutable protagonist. Of necessity Nier is not revolutionary in the means by which it accomplishes this, but it is notable for the skill and verve with which it helps the player become the character. In that regard, it represents the best of what its genre can be. Rating: 9.5 out of 10.

Disclosures: This game was obtained via retail store and reviewed on the PS3. Approximately 40 hours of play were devoted to single-player modes (completed 2.5 times). This included a lot of subquests and upgrading, not to mention the time I spent trying to be a gardener.

Parents: According to the ESRB, this game contains blood, partial nudity, strong language, suggestive themes, and violence. One character always wears a skimpy negligee and swears like a sailor. Blood goes flying during many of the fights, and at least one brutal murder happens onscreen. This one is not for the kids.

Deaf & Hard of Hearing: Subtitles are available and audio cues are always supplemented with video information.

When I finished the game I thought it was a truly awesome experience. I thought wow.. a good start to a JRPG innovation? That this would be a great turning point for the genre. Then I noticed the horrible reviews it got from western critics and that the developers have stopped making games.

Too bad, but at least we got this wonderful game right?