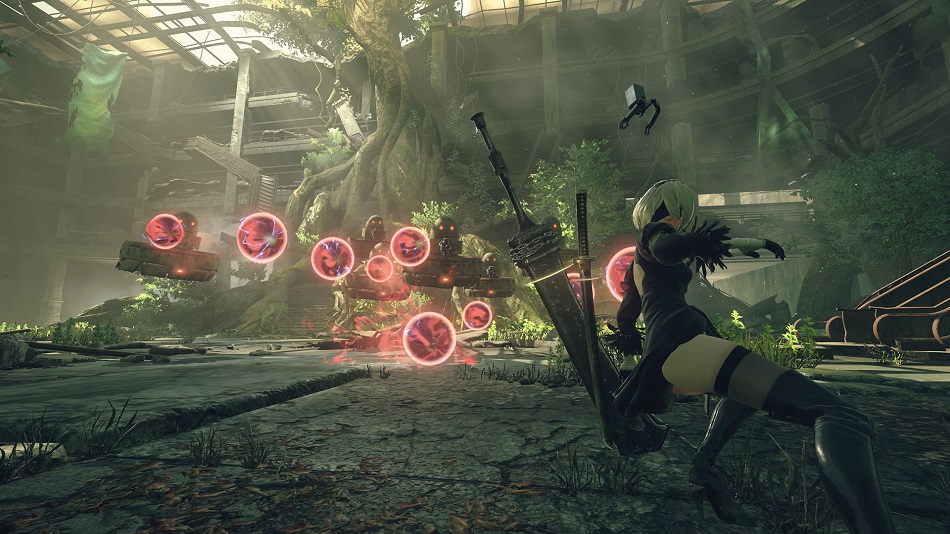 HIGH Blowing away a whole squad of Forest Knights with a laser blast.

LOW The ubiquitous hacking is a lackluster twin-stick shooting exercise.

WTF The ending with the fish.

If you’ve come to this article for a recommendation, let me begin with it — Nier Automata is a good game and you should play it, and I mean play it all the way through, not giving up during the B path as Brad did. Automata is not a perfect game, and the B path doldrums are certainly the biggest reason why. Automata rewards perseverance in its later chapters to a degree that makes the B path forgivable, though still fundamentally flawed.

Though it is a sequel to Nier (and thus, the original Drakengard) Automata doesn’t require any familiarity with its predecessors to play. Millennia have passed since the previous game, and the Earth is overrun by machine lifeforms. Androids, hoping to clear a way for humanity to return to Earth, have fought the machines into a stalemate that has lasted hundreds of years by the time protagonists 2B and 9S (or “Nines”) begin their story together.

In contrast to that stagnant backdrop, almost nothing in Nier: Automata is static. The gameplay constantly shifts, from a standard 3rd-person action RPG perspective to shmup to twin-stick shooter to side-scroller, and it  even occasionally samples the text adventure format. The physical setting, in a marked contrast to most other open-world games, also transforms dramatically over the course of the story. Automata almost never establishes any truth that is permanent or any situation that will last. Even in its final moments, it’s shifting the ground under the player’s feet and redefining what it is as a game, and who its characters are.

One strength of Automata’s dynamism is that it focuses the player’s attention on what is not changing. The relationship between 2B and Nines develops and the player’s understanding of it deepens and shifts with late-game revelations, but the core emotion between them serves as one of the few constants. This helps invest the player in that relationship and intensifies the stakes, so that it can motivate action in later chapters.

Another strength of the highly dynamic approach is that it helps keep Automata from becoming stale. The involvement of impresarios Platinum Games ensures that every mode of play is tightly and competently executed… but the designs are such that none of them are all that interesting. The RPG combat is mashy and rote, while the various shmup and twin-stick elements don’t require much finesse. It’s possible to put together dodges, dashes, and attacks in a way that creates real elegance, but the game doesn’t feel like it’s been tuned to demand or even to particularly enable that. Only in the double-jumps and dashes of traversal (particularly in the desert area) does it feel graceful. 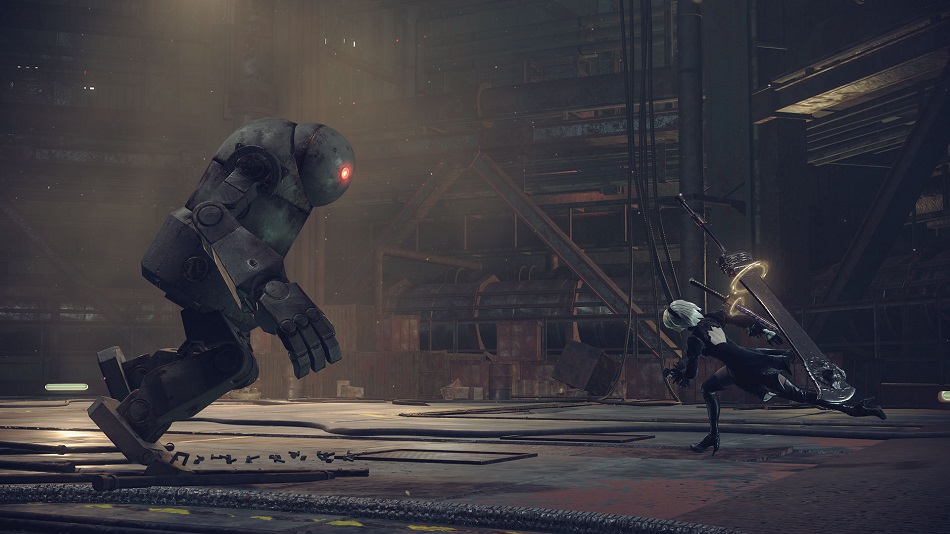 Unfortunately, Automata falls short of its predecessor in the effectiveness of its varying styles. Nier used its protean gameplay to develop mood and contextualize action in a way that Automata (with the exceptions of the forest castle area and its late uses of the hacking minigame) simply doesn’t. Gameplay shifts in Automata tend to feel utilitarian or incidental rather than aesthetic. Still, by moving constantly from one style to another, Automata regularly inspires a sense of surprise and discovery.

That all grinds to a halt after the game’s first “ending”. Like Nier and the Drakengard games, defeating the seemingly-final boss doesn’t bring an end to Automata’s story. The “finished” save can be loaded and a new path can be played through. In this case, finishing the story unlocks the B path played from the perspective of Nines.

The problem is that the B path almost never offers the same feeling of surprise the A path and the other major storylines do. Instead, it rehashes the events of the A path with essentially the same gameplay — a choice that draws attention to the game’s sometimes questionable writing and weaker mechanics. Because Automata holds back big reveals for the last few minutes, it refuses to provide any real insight into Nines’ relationship with 2B in these chapters, nor does it significantly elaborate on Nines’ independent activities during the periods when the androids are separated.

The essential work the B route does is to introduce Automata’s hacking minigame, which is frequently recontextualized in the game’s ending chapters for dramatic effect. Unfortunately, in its raw form the hacking is a deeply uninteresting twin-stick shooter with no layers beyond reflex. Worse, because hacking is mapped to the heavy attack button, standard combat becomes extremely dull. I recommend playing on easy to make things go quicker, but avoid the temptation to barrel through these chapters on the critical path because crucial information for understanding the endgame is buried in some of the worst hither-and-thithering sidequests.

The off-putting nature of the B path is a shame, because just beyond it, the C path shatters the foundations of the game again. Not all of the late-game twists work or even make sense, but enough of them stick to produce an “ultimate” ending that is profoundly moving, tragic, and triumphant.

The reasons I enjoyed Nier: Automata amount to a general critique of games as they currently exist. Pacing, dynamism, and willingness to experiment with form and to challenge players intellectually – all of this should be common rather than remarkable. When it drifts away from its core commitment, when it ceases to surprise, Automata becomes ordinary and dull. If that mistake had not been made, Nier: Automata would be greater, but it’s still great. Rating: 8 out of 10

Disclosures: This game is developed by Platinum Games and published by Square Enix. It is currently available on XBox One, Playstation 4, and PC. This copy of the game was obtained via retail purchase and reviewed on the PS4. Approximately 40 hours of play were devoted to the single-player mode, and the game was completed (endings A B C D E K M T W). There are no multiplayer modes.

Great review! I played the demo last week and noted you can let the game do all the combat for you. As someone who tempts permanent RSI whenever using a controller or overusing a mouse, this option is a godsend. Sure it reduces the game to pretty much a walking simulator, but surely for that B-route and the extra paths, this would seem like the perfect option to play through the story aspects. Because of mild RSI, I decided to watch Persona 5 instead, but quickly became uninterested. I noted when playing Neir: Automata that directing your character yourself is… Read more »

I agree, having more options and especially options that aid in accessibility are always a great thing. Platinum is currently leading the way when it comes to including this sort of thing IN a game’s design, I’m pretty sure. They did it with Bayonetta, and maybe others. Good on them, and I hope other devs follow suit.