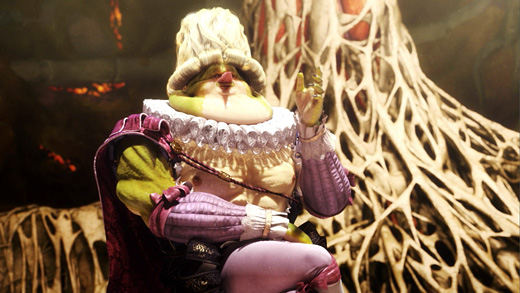 The only interesting thing about NeverDead is that it's not actually as bad as it seems after you've beaten it. I don't mean that NeverDead is secretly a good game. It truly stinks, mostly for boring reasons—awkward and mushy controls, inconsistent mechanics, stock characters, vapid story. However, NeverDead leaves an even worse impression than it deserves to, because its concluding bosses exhibit excruciatingly stupid design. As a result, the game goes out on a sour note that obscures its few clever moments. NeverDead is a bad game that seems terrible because its last fights transform its unique mechanics from positives into negatives.

To understand how that happened, it's important to examine those positives. The best place to do it is with the game's second boss, Quad Jaw. The name may seem confusing at first, since Quad Jaw initially appears with three hydra-like heads. Once these have been cut off, however, the boss transforms into a giant insectoid creature with a huge vacuum mouth. Most of the critter is invulnerable, although it can be made to expose its (sigh) glowing weak point if it suffers an internal injury.

Fortunately, NeverDead's main character, Bryce Boltzmann, is immortal and easily tolerates dismemberment. Thus, he can rip off his own arm, throw it into the creature's mouth, and then shoot the beast from the inside. The player can also make use of Bryce's immortality to increase his attack power with nearby fires and electrical boxes. Here, NeverDead's unique mechanics solve the player's problems.

The next unique boss battle involves Sangria, a weird little muscled humanoid, and it is a sign of trouble. It takes place in a large church that Sangria spends most of his time jumping around. Although parts of the church are destructible, Sangria moves too quickly for this to be useful against him. Neither fire nor electricity seem to be available in the building to charge up Bryce's attacks, and there's no way to make any real use of Bryce's immortality. The battle isn't bad, but it doesn't make any use of NeverDead's unique mechanics. It could have been ported into any third-person shooter at all, with little change.

The same can't be said of NeverDead's concluding boss battles, which inspired both Kotaku's Owen Good and Destructoid's Jim Sterling to outbursts of Twitter rage. Their ire primarily focused on the battle against Alex, a fellow immortal who has three life bars that must be worn down in a classic pattern fight. The player must damage Alex with a sword or gun until about a third of his life is gone, at which point Alex will stop moving just long enough for the player to cut off an arm. This process repeats for the other arm, and then the last health must be whittled off so that Bryce can take a swing at Alex's neck. If the player takes too long executing the pattern, the current life bar regenerates. 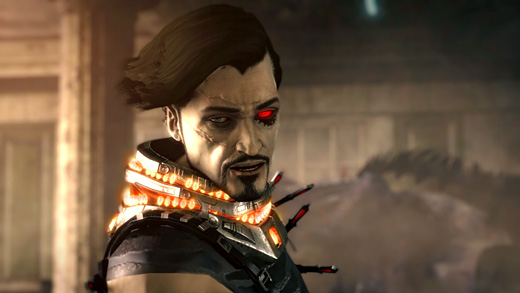 What makes a player take too long? Actually doing the necessary damage to Alex isn't much of a problem, and lopping off the requisite limbs is trivial. Alex moves and strikes incredibly quickly, though, and the ability that's supposed to protect the player from attacks by slowing down time doesn't work in this fight. Moreover, Alex can dismember the player in a single strike, or cut off his head at range. The arena where the battle takes place is just rough enough that it takes a while to roll Bryce's head back to his body, and a few dismemberments (or just one, unluckily timed) may be enough to let Alex heal. Bryce's immortality is now an obstacle to the player.

This becomes even more acute in the battle against the final boss, Astaroth. This fight has a variety of problems, most of which only pose a serious challenge to a player's patience. The real difficulty comes from the fact that after the earliest phase of the fight, Astaroth can slam his giant snake-arms against the floor of the arena, causing a wave of destruction that instantly knocks Bryce to pieces. The player can avoid the wave with a carefully-timed dodge, but this never worked consistently for me, even when I wasn't distracted by the waves of enemies Astaroth dumps into the area.

A lucky player may be able to stick himself together again quickly. If he hasn't disposed of all grunts, however, they might kick Bryce's head across the arena, at which point it's easier to just wait until Bryce charges up his ability to regenerate his whole body. The risk here, as I found, is that this takes just long enough for Astaroth to attack again, so that Bryce is knocked apart immediately after getting put back together. It's pointless, and frustrating, and it weaponizes NeverDead's unique mechanics against the player.

The boss fights against Alex and Astaroth are not intrinsically difficult; they only seem so because they are in NeverDead. The game's unique mechanics make these battles frustrating and slow, and provide no compensating problem-solving capability. There's little in the way of destructible environment and what is available can't be used against the bosses very well, if at all. Neither fire nor electricity are available to power up Bryce's attacks, and his slow-motion dodge doesn't seem to work for the duration. Most importantly, the dismemberment ability, that was a tool the player could use to solve the Quad Jaw battle, becomes solely an impediment to the player's success.

Having turned Bryce's powers against the player, it's no surprise that NeverDead's closing boss battles provoked frustration and rage. The last message that the player takes away from the game is that its unique mechanics make the game harder and less fun than it would be otherwise. That ends NeverDead at its nadir, leaving a nasty impression that's unlikely to dissipate, and making a bad game seem even worse.

Spot on thoughts, I actually REALLY liked this game but the Bossbattle is driving me crazy. It drags on forever and its frustrating. Left me with a bad taste, this turned this game bad for me.