A Dart Without Feathers 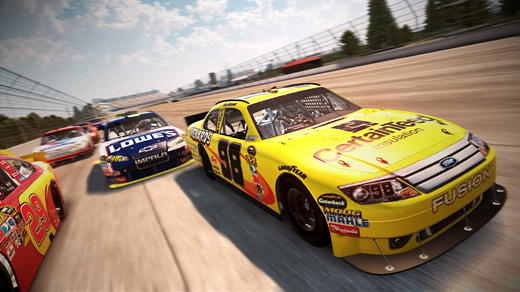 HIGH Going from last to first over eight laps at Darlington.

LOW Getting spun out in turn four at Martinsville and receiving a pit road speeding penalty rather than a caution flag.

A stock car is not a perfect automobile, and that's the beauty of NASCAR. Compared to a graceful Formula One vehicle or Indy Car, a stock car looks like a tank, with the weight and handling to match. Winning a race means finding the narrow line around the track where the car handles well, and knocking everybody else off that line, with your fenders if necessary, an experience Cale Yarborough famously compared to dancing with a chainsaw. A game that could really recreate that kind of driving would be great, but unfortunately, NASCAR 2011: The Game

Although it allows for a vast amount of customization, NASCAR 2011 also provides the player with an extensive set of track-optimized setups and attractive paint schemes. Players can also select to play as their favorite drivers, although the game only comes with 2010 sponsors and points (DLC for 2011 is available). On the single player side, a player can jump in for one race at any of the main NASCAR courses or play the rather poorly conceived "career" mode.

For some reason this mode consists of a single season, and only allows races to be retried until the player reaches the season-ending Chase. This is a pity, because for some reason the single races and career mode have different racing options, and career mode's are better. Rather than using a "race weekend" construction, career mode only allows qualifying and racing. To take practice laps, the player has to back out to the preceding menu. Racing, career, or practice, you're certain to get two things: plenty of useless chatter from your food-obsessed spotter, and a long loading screen. 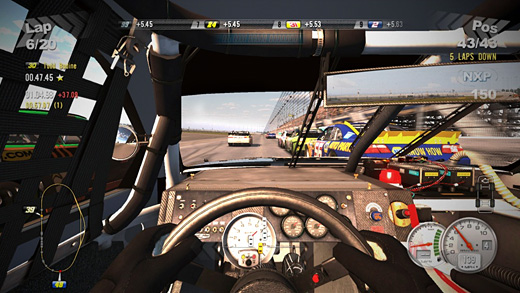 Once you finally finish loading, the quality of the racing NASCAR 2011 fails to impress. The game oversells the advantage of drafting, both to the player and to its own AI. As a consequence, the AI drivers tend to form linear drafting packs at almost every course, as if aero push, a much-discussed handicap of the current car, didn't exist. NASCAR 2011's drivers also don't seem to have any real differences in car quality or racing ability, so all the cars tend to remain unrealistically bunched up, even in long races, regardless of the difficulty level.

More broadly, the AI just can't seem to keep up on many courses. Except on the hardest difficulty setting it's not particularly tough to take the pole at most tracks. Once the race starts, almost any player can dominate, and a recent patch seems to have removed the rubber-banding that gave the AI its only chance. On the superspeedways, road courses, and some short tracks the AI can be quite competitive, but even there taking a win doesn't feel like much work, even for a casual player of driving games like myself.

For the casual fan, the wrecks are a major draw of NASCAR, but even these fail to impress. When a pileup occurs, cars bump off each other harmlessly like so many die-cast replicas. Because the frames never deform, including in superspeedway wrecks that can knock an engine block right out of a car, the energy of the wreck sends cars flying easily, even at slower short tracks like Martinsville.

The released version of the game had abysmal handling of caution flags, a problem that has been somewhat ameliorated by a subsequent patch. Single-car spins still don't always bring out a caution, however, and getting spun towards pit road still results in a penalty. 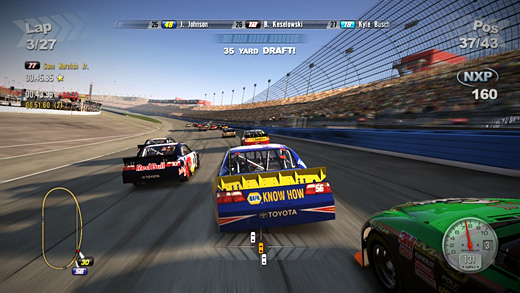 In both the single-player and online phases of the NASCAR 2011, players can earn "NXP" as part of the ongoing trend of dressing up games with RPG-lite aspects they don't need. Passing cars, lapping them, leading by a large margin, and doing a particularly impressive burnout after you trash the game's idiot AI all earn NXP, which can be used to unlock paint schemes, challenges, and "pins" that are of little use. The paltry rewards and the ease of gaining points through irrelevant actions like burnouts made this system feel tacked-on and perfunctory.

A merely passable single-player game like this could be saved by strong multiplayer, but that doesn't happen in NASCAR 2011. Setting up my own custom race almost never worked; the few drivers who stumbled into my lobby usually backed out immediately. I could get into races using the "quick race" option, but this only revealed the game's abysmal online play. Lobbies fill up and then crash for no apparent reason, players get booted mid-race, and cars jerk around irregularly on the track as communication lags. The races still take forever to load and sometimes start with pileups before the green flag. These problems have been somewhat ameliorated by the patch, but new ones have cropped up: on several occasions the game stalled on a loading screen before I ever got to a lobby, necessitating a soft reboot.

Even if you get a race that actually loads and starts properly, the absence of a player minimum (and of AI bots) means that it's easy to find yourself in a deadly dull two-person race around Talladega. Latency problems cause the opposing cars you can see to jerk around the track strangely. The game's online culture seems to feature an enormous number of players who are in it only to wreck, and even those who don't want to will probably find themselves banged up due to the lag and the strange tire-wear model. It's astonishing that Activision let a multiplayer mode this broken go out the door, and appalling that they are charging full price for it.

feels like a slapdash effort, a rough draft of a game dressed up with a fancy cinematic and some licensed music and sent out to make a quick buck off the fans. The detailed customization is great, the rewind feature is smart, and many other aspects are competent, but in almost every area the game has a glaring flaw or two. The game's much-anticipated patch has made some headway against these issues, but the problems that remain (or have been added) are too significant to overlook. Fans starved for a real NASCAR title after several years of inactivity on the license may find this passable, but players who love NASCAR and want a game that really captures the experience will find that this isn't it. Rating: 3.5 out of 10.


Disclosures: This game was obtained via publisher and reviewed on the Xbox 360. Approximately 15 hours of play was devoted to single-player modes (completed career mode once) and 8 hours of play in multiplayer modes.

Parents: According to the ESRB, this game contains mild language (Wii – mild lyrics). There's nothing to worry about—there's no colorful language, blood or violence.

Deaf & Hard of Hearing: There are no essential sound cues and all the data you can get from hearing is pictorially represented. However, there are no subtitles anywhere, so the track intros and spotter announcements will be lost to you.