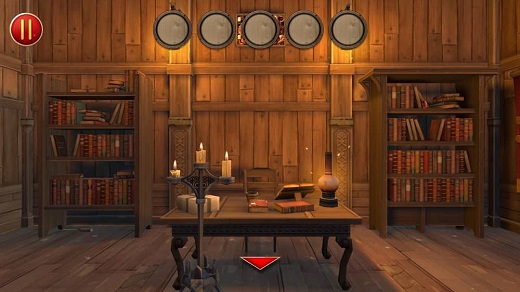 LOW A puzzle was so badly bugged that I had to restart a whole level in order to deal with it.

WTF Seriously, how does that even happen in a game this short and this thin?

Woody Allen once repeated a joke in Annie Hall about two ladies at a Catskill resort. The first lady says "Boy, the food at this place is really terrible," and the second says "Yeah, I know; and such small portions!" This joke might have been written about Mysterious Castle, a bad and brief puzzler from OpenXcell Studios.

Mysterious Castle clearly started life as a mobile title. Keyboard control is absent, and moving the disembodied first-person viewpoint around the rooms is accomplished by clicking on hotspots or arrows that are on the screen. Each chamber in the castle presents a brief sequence of dull puzzles, most of which revolve around finding an item or two and using those to find a code or key. One might, for instance, hunt up a broom to clean away some dust that reveals a code that opens a chest. Each room features 3 or so such puzzles, the last of which always opens a way out.

Another puzzle features a picture of a rainbow and a set of tiles representing colors that must be arranged in the correct order. To the game's credit, the puzzle was clever enough that I got it wrong on the first try. To its discredit, when I removed all the tiles and tried to put them back correctly, it only let me put in five of the seven needed. I had to restart the room, of which the game has only 10.

It is just astounding to me that this happened. This is not a long game. There are not many puzzles. How can one of them be this seriously screwed up? This wasn't not the only bug; somehow every time I unlocked a room I disabled the music, probably because the options menu hotspot was aberrantly active.

The puzzles that do work uniformly disappoint, due to their almost universal reliance on just randomly clicking around the screen until something that's actually interactive gets activated. Of course, this kind of complaint could equally be leveled towards The Room, a successful puzzle series this game is aping, at least in form.

The Room and its sequels, whatever faults they have, look amazing, use their puzzles to build both interest and suspense, and use a spooky atmosphere to enhance the impact of the proceedings. Not even the most optimistic assessment of Mysterious Castle could claim the same. This castle is a dump, the rooms explored tend to be utilitarian rather than opulent, and there's no sense of building mystery or awe. It's just some stuff. Then, very quickly, it ends.

So here we have Mysterious Castle, a puzzle game that does not have many puzzles. Most of them are not fatally bugged; none of them are interesting. Its castle isn't worth exploring, nor are its mysteries worth examining. To give this opinion a brevity to match the game itself: Mysterious Castle is a bad game and you should not play it. Rating: 2 out of 10

Disclosures: This game was obtained via publisher and reviewed on a home-built Windows 10 PC equipped with an Intel i7 processor, 8 GB RAM, and a single Radeon R9 270X graphics card. Approximately 1 hour of play was devoted to single-player mode and the game was completed. There are no multiplayer modes.

Parents: As of press time this game has not been rated by the ESRB. No objectionable content was noted.

Deaf & Hard of Hearing: The game has no essential sound cues, so you should be fine.

Remappable Controls: Controls are not remappable. This is a point and click game that uses the mouse exclusively.

Colorblind Modes: No colorblind modes are available. One puzzle uses color and has bugs that prevent trial-and-error approaches.