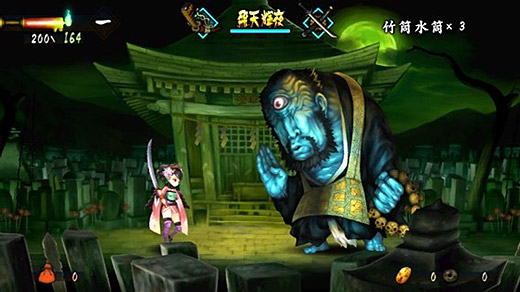 Japan's greatest swordsmiths, Masamune and Muramasa, were not contemporaries, but there are several legends involving both of them. One tells of a competition in which each one forged a sword and lowered the blade into a river. Masamune's sword seemed to be inert: fish swam up to it, the flowers floating in the river brushed by without harm. Muramasa's blade, in contrast, cut everything it touched. The fish were split in two, the flowers sliced to ribbons, and the very air hissed in pain as the weapon cleaved it. A passing monk saw the display and chided Muramasa, pointing out that Masamune's sword cut no undeserving thing, while Muramasa's blade killed indiscriminately. Time and legend have ascribed a bloodthirsty, evil aspect to Muramasa's swords, and it is this reputation that Muramasa: The Demon Blade aims to evoke.

Vanillaware, the creators of Muramasa, are probably best known for their 2007 role-playing game Odin Sphere, a game which was marked by a beautiful coherence of story, play, and symbolism. It would not be fair to expect another masterpiece of that quality, but I did expect the resemblance between the two games to be more than skin-deep. If you come to Muramasa looking for gorgeous 2D graphics and a fantastic score, you will not be disappointed. Unfortunately, the simplistic story and uneven design of Muramasa make it a hollow and repetitive experience.

Muramasa features two stories: that of the princess Momohime, possessed by the spirit of an evil swordsman, and that of the amnesiac ninja Kisuke. Unlike Odin Sphere, where the stories of the five main characters were intertwined in often surprising ways, these two tales have little besides backstory and a few shared characters connecting them. Moreover, the story is presented in very spare fashion, rarely offering anything more than a few lines of dialogue to explain why a particular boss must be fought or where to go next. There is no rich, textured narrative here, and as a result the game feels more like a quickie tour of Japanese folklore than a coherent story. The romance between Kisuke and Torahime is too understated, and Momohime's dedication to the reprehensible Yukinojyo is unmotivated and frankly sad.

The world of the game is, of course, feudal Japan, divided up into the provinces from the era of the Shogunate. These provinces appear in the game as a series of connected rooms (or zones), with some limited internal geography that must be traversed with light platforming. Sometimes these rooms are filled with enemies from the outset, in which case they can either be fought or bypassed. Random encounters also occur in these rooms, instead of in a separate battle stage, although when this happens the room no longer scrolls and the player must fight in the window onscreen at the moment of attack. Defeated enemies lose their souls, which can then be used to repair broken blades and forge new swords. Eating food (to provide "Spirit" to the character) is also necessary to forge additional weapons. The cooking element is very light, however, and most of the recipes rapidly become irrelevant because they have too small of a healing effect relative to the size of the life bar (which expands more than 50-fold over the course of the game). 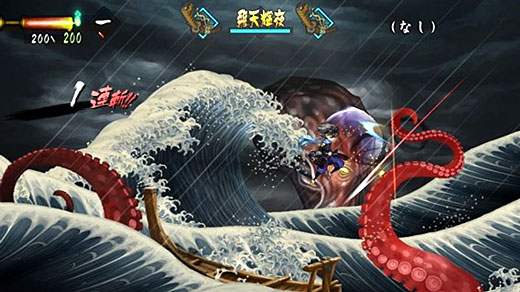 The difficulty and complexity of combat, for the most part, depend entirely on the player's choice of "Muso" or "Shuro" play. In Muso mode, most battles can be won with sheer aggression, with the exception of some bosses and the random encounters with oni in the game's version of hell. In Shuro mode the fighting becomes more complex and tactical, although many enemies are still susceptible to a strategy of continual attack. Momohime and Kisuke have exactly the same controls and abilities, however, so the only real difference in gameplay between their respective stories is a few field enemies and the bosses. Even this disappears late in the game, when they gain the ability to fight each other's bosses. At that point the game reaches a repetitive nadir, but one that must be slogged through in order to level both of the characters up enough to wield the game's final sword and see the "true" endings. Leveling up the characters to defeat major enemies is generally unnecessary because the foes seem to scale with the character's level, particularly the bosses and the enemies leading up to them.

The troubling thing about these various components is that they all seem disconnected, or even opposed. The RPG elements, particularly the massive life bar, make the game's simplistic cooking system largely irrelevant. The scaling of enemies makes the leveling irrelevant, but at the same time, participation in the monotonous combat can only be justified by the need to level. The brilliant composers at Basiscape created a score that allows the battle music and field music to switch seamlessly between bars, and the battles take place without a screen swap, but the wonderful effect this has on the game's continuity is ruined by the scroll-lock and post-battle EXP screen. Momohime and Kisuke run around collecting souls all game, but the story essentially ignores this grim task. Moreover, the need to do it has no real bearing on the gameplay—unless a player consistently runs from every battle, he'll have little trouble gaining the souls required to forge all the swords twenty times over by the end of the game. Muramasa is fundamentally incoherent.

I can't help but feel that Muramasa would have been better off if Vanillaware had embraced the brawler at the game's core and discarded the RPG elements (and Muso difficulty) entirely. The process of leveling up doesn't really add anything to the game, and the character development offers nothing for the player to do. Because the expanding life bar and experience screen notably interfere with other elements of the game, why not just get rid of them? Focusing the game on tactical combat, and the sword system on the selection of special attacks or abilities, would have made this a game about fighting smart rather than just about whacking things with a sword until the next boss. Making Kisuke and Momohime play in noticeably different ways would also have made the game a more interesting experience.

Even those changes, though, would only somewhat ameliorate a fundamentally hollow experience. Muramasa: The Demon Blade reminds us of a famous swordsmith and his bloodthirsty blades, but the madness and viciousness thus evoked never really find their way into the gameplay or the thinly-presented story. Like its vast, fractured provinces, the various systems of the game never manage to form any coherent whole. Instead, the game comes across as a whole bunch of ideas thrown together willy-nilly and wrapped in as beautiful a package as possible. Muramasa has no secrets to reveal, no depths to plumb, no story to tell that equals its luxurious presentation. Like a ceremonial sword, it is glorious to behold, and better gazed upon than used. Rating: 6.0 out of 10.

Disclosures: This game was obtained via retail purchase and reviewed on the Wii. Approximately 14 hours of play were devoted to single-player mode, completed one time at "Muso" difficulty with several additional chapters reviewed on "Shura" difficulty.

Parents: According to the ESRB, this game contains alcohol reference, fantasy violence,and suggestive themes. The game features a great deal of violence but all of it is highly stylized rather than realistic. Some characters appear partially nude in the hot springs scenes, but it's nothing racier than you're likely to see on in a supermarket checkout aisle. Alcoholic beverages are a modestly effective healing item in the game, and alcohol references appear in several conversations.

Deaf & Hard of Hearing: The score by Basiscape contributes significantly to the game's atmosphere. However, the actual gameplay does not rely on auditory cues and all dialogue is subtitled Japanese.

This game is only worth a few hours. I cannot get over the lack of depth in this game. If you are really interested in it, please just rent it for a week. You should be able to beat it in that time. If you want to play it again and again then buy it. As far as 2D games go, I would take PSOne Castlevania: SotN over Muramasa anyday. Not to mention it’s like $10 on the PS Network….not the $40 I paid….sadly. 🙁