Monty, this seems strange to me 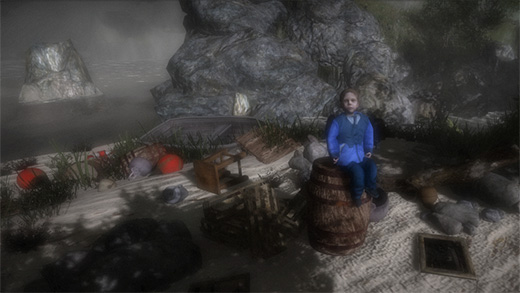 HIGH A puzzle where a turbine the player can't turn is rotated by the air currents rising off a few candles. Hey, at least I got a laugh out of it.

LOW The incredibly irritating stagger affecting the main character's walk at the start of the game.

WTF So the combination to this safe is just written on a note in the drawer underneath the safe?

is the best possible refutation of the idea that Dear Esther needed "more gameplay". Both games feature deranged men stumbling around islands covered in crap, but where Dear Esther is content to let its words, images, and sounds spin off into their own beautiful elegy, Montague's Mount insists that players must gather four bits of rock and shove them onto a pedestal to unlock some gates before moving on to the next desolate, rainy beach.

Suffice it to say, this is not an improvement.

Montague's Mount wants to be a game about mental illness. This is not just a matter of the child the main character keeps hallucinating, or the way the game labels photographs "Someone's discarded memories". Montague's Mount actually stops the action regularly to toss up a quote about insanity or the experience of it, as if to say as baldly as possible "I AM A GAME ABOUT MENTAL ILLNESS". Alas, this is not true. Montague's Mount is a story about mental illness, but as a game it is merely another in the long parade of sub-par adventure puzzlers that has happily scrolled across computer screens for well over 30 years now.

That's not to say that the game lacks the necessary materials. The washed-out, desaturated graphics, the bleakness of the island, the obsessive collection of artifacts, the performance of little rituals to advance — all of these could be bent into the shape of a game about mental illness. But it's difficult to parse what — if anything — is meant to be symbolic from what's merely low production values or archaic adventure-game guff.

Perhaps this would be less of a problem if the puzzles were more tolerable to play.

Here's an early one: the protagonist wishes to turn on a light in a house. He accomplishes this by wandering to the end of the trail, where there is a generator. There's a key next to the generator, which unlocks a shack next to the house where he started. So, back down the trail he goes to find that the shack holds a tank of gasoline. The gasoline obviously goes into the generator, so once again down the trail to the generator where there's a minigame to start it up (enjoy the minigame, it shows up a lot). And then? Back to the house, to finally flip the switch. There is no mental challenge here, only a trying of one's patience.

All this to-ing and fro-ing is extended by a slow walking speed. This snail's pace infects every facet of the game — if anything must move, including the dials that are part of puzzles, one can be sure that it will take ages to do so.

If the set-piece puzzles of Montague's Mount occasionally warm up the brain, they still fail to make any real sense. A set of colored spinners controls the steamworks that powers a log bridge. Some compasses on pedestals must be aligned to north, unlocking a gate, and so on. This sort of thing is everywhere in the game but there's no logic underpinning it, not even the dream-logic of symbolic connection.

Since the gameplay doesn't get anywhere, the story needs to step up, but it feels like there's nothing there. A spectral child and a bit of ranting isn't enough to build an interesting narrative, especially when all that talking doesn't help to tie the protagonist's physical and emotional journeys to one another. Anyone who manages to get invested in the story will no doubt feel somewhat betrayed that the game stops halfway through it.

I could bring up a dozen more problems, major and minor, with the game, but what's the point? Montague's Mount

doesn't have interesting puzzles or a structure that ties them into a coherent work about mental illness, despite its heavy-handed announcement of that intent. I respect the aim, but the execution is terrible. Rating: 2 out of 10


Disclosures: This game was obtained via publisher and reviewed on a home-built Windows 7 PC equipped with an Intel i7 processor, 8 GB RAM, and a single Radeon 6800 HD-series graphics card. Approximately 5 hours of play was devoted to single-player modes (completed once).

Parents: As of press time this game has not been rated by the ESRB. Although there is some disturbing imagery, including piles of corpses, and a reference to violence against children, there's nothing especially gory or violent.

Deaf & Hard of Hearing: No sound cues are needed to solve the puzzles, and the voicework is subtitled although the game sometimes forgot the subtitle setting between sessions. This may have been subsequently patched.