Prepare Yourself for the Rubberband Man 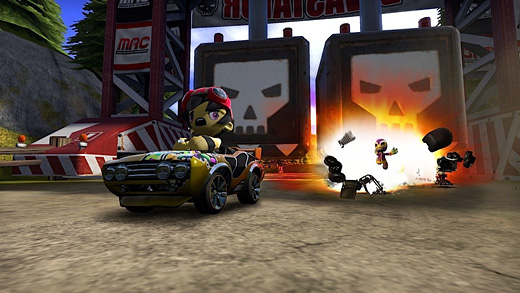 HIGH Fulfilling all the conditions to earn all of a track's prizes and skidding across the finish line in first.

LOW Fulfilling all the conditions to earn all of a track's prizes and getting dropped from first to sixth by attacks within sight of the finish line.

WTF Why did they include this dull story (announcers, skits, etc.) in career mode?

I must begin this review with a disclaimer: my hand is slightly too large for the Dualshock 3 controller. Under ordinary circumstances this hasn't been a big deal, but under ordinary circumstances I'm not trying to mash down the right trigger for five minutes straight. The persistent ache in my right index finger may have distorted my feelings about the single-player campaign in ModNation Racers, even though its epic load times gave me several opportunities to relax and massage it out. The irritation I felt as I waded through career mode was physical as well as mental, and did significant violence to my positive feelings towards other aspects of this cute and creativity-inspiring racing game.

The on-track action in ModNation Racers follows the familiar kart-racing template. Players must navigate through convoluted little speedways with outrageous jumps and large hazards while picking up weapons and dodging the attacks of their competitors. United Front pulls this off very well, while adding a wrinkle in that drifting (among other things) charges up a gauge that allows the player to boost on his own, sideswipe other players, or defend against the missiles and lightning bolts they're firing at him. The near-constant action gives ModNation Racers the core of comic mayhem that makes the genre a success.

In single-player, however, the fun is crippled by the incredibly aggressive AI which attacks you non-stop and shrugs off your weapons with the power of the rubber band. The AI's tendency to snap to your position makes boosting essentially useless, and using the shield is often a waste of time because it drains your gauge before it has time to deflect an enemy's weapon. ModNation Racers always requires the player to place at least third in order to advance to the next race, and sometimes demands a win, so the extreme AI causes the game to lose its charm very quickly. Matters aren't helped by the irritating announcers who degrade you if you have the temerity to come in second in a championship race, or by the limp little story segments between races.

Of course, getting a game like this for the single-player is a ludicrous idea. As one of Sony's "Play, Create, Share" games, ModNation Racers has a different kind of focus. After all, as you enter the game's ModSpot hub (after a nice, long, relaxing load) the first thing you see isn't a leaderboard of player performance, but rather the three most popular avatars ("mods") and karts available for download. Right next door to them is the Creation Station, where the player can create his own mods, karts, and tracks, or download those other players have made. 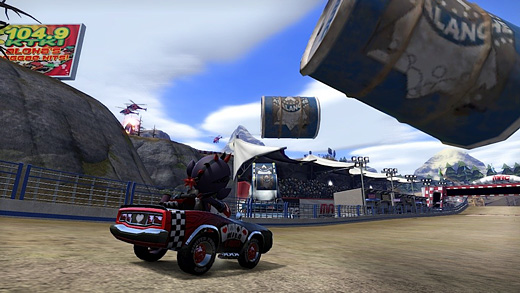 I cannot emphasize enough how easy it is to create really cool-looking racers and karts with these tools. Starting from nothing and skipping all tutorials, I managed to make a pretty decent Cthulhu and upload him within about half an hour. Then I made him a little kart so he could ftaghn in style, again taking very little time to make something that looked pretty decent. Although I was able to make lots of neat stuff very quickly, it was obvious at the same time that these tools had more power than was initially apparent, especially when you really start messing around with the stickers. The track design tools are even more impressive: with the assistance of the game's auto-populate feature, you can make a pretty fair circuit in just minutes. Sharing these so other players can see and download them is quick and convenient. The creation tools get a perfect grade…

Or they would, if the game didn't lock away so many of the materials behind the single-player campaign. Many basic features for mods and karts are available right off the bat, but if you want to have access to all the cool stuff ModNation Racers has to offer, you'll have to beat the career-mode races. And not just beat them, but also fulfill their "payout" and "bonus" conditions, which are sometimes as simple as hitting all the jumps and sometimes as difficult as taking down three opponents at a particular point on the track. Oh, and you have to win the race, too, of course. Additionally, it's quite difficult to figure out what challenge unlocks which prop, leading to some unpleasant trial and error, interspersed with plenty of irritating pauses to load.

It's up to the multiplayer to put some fun back in the game's racing. Fortunately, that's exactly what happens. Without the rubber-banding enemies it's possible to put some real distance on the field if you're racing well in multiplayer. If not, you can at least distract yourself somewhat by wreaking havoc with your competitors. The only downside is that the XP Race matchmaking has a tendency to put you on the same track over and over again—if I never see "Farm Frenzy" again it will be too soon. And, as with every other aspect of the game, multiplayer involves plenty of waiting for loads.

Although not many players are using voice chat (this might be a blessing), the pre-race gameroom offers easy access to the game's main social feature: sharing mods and karts. If you see something interesting, it's simple to take a look at another player's shared creations. I've found a couple of my favorite mods this way, and it may prove to be the best way to find something interesting that isn't derivative material, since the keyword search and "Most Popular" filter are strongly biased towards existing intellectual properties.

The tilt towards other IP underscores ModNation Racers's lack of identity. This game has generic kart-racing action set in blandly charming places with, ultimately, characters drawn from other universes. Though the career mode story delivers a limp message about being yourself, its main character has no apparent self, and neither does the game. There's no ModNation Racers aesthetic, nothing that makes the experience of playing the game unique or different. The creativity the game allows mostly amounts to window-dressing. Getting to the point where you can fully exercise even that level of creativity requires hours of plugging away at a charmless single-player campaign, which puts even the philosophical identity of the game into question. ModNation Racers has a core of creative multiplayer fun, but it's sadly mummified beneath an irritating career mode and layer upon layer of load times. Rating: 6.5 out of 10.

Disclosures: This game was obtained via retail store and reviewed on the PS3. Approximately 9 hours of play was devoted to single-player mode (completed career mode 1 time) and 12 hours of play in multiplayer modes.

Parents: According to the ESRB, this game contains cartoon violence and comic mischief. Obviously the game has a substantial online component, and the potential for your children to encounter objectionable language is there if you keep voice chat turned on. My experience is that the game's online community keeps it clean, especially if one of the players is obviously a child. Parents will need to stay engaged and monitor online play, and learn how to use the (relatively simple) reporting system.

Deaf & Hard of Hearing: Both audio and visual alerts of incoming attacks can be spotty; players who use them in combination will have an advantage over hard-of-hearing players. Subtitles are available for most of the game's lines, but not for in-race admonitions from your crew chief, so some information will be lost.

If you could recommend only 1 game, which one would you recommend: ModNation Racers or Sonic & Sega All stars Racing?