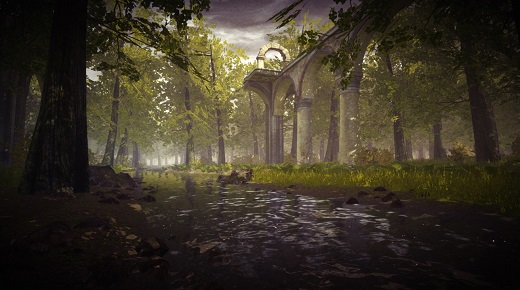 HIGH The title sequence on the cliffside beach.

LOW The "final battle" against a ranting psychological entity.

WTF What exactly is the colossus doing when both its feet are lifted?

Mind: Path to Thalamus will likely be called a "first-person stroller" or "walking simulator", but I think it's a bit more helpful to situate it in the subgenre of "mind-walkers".

These games, prototyped by Dear Esther and including Montague's Mount, Ether One, A Machine for Pigs, etc. feature three main elements: a man (for some reason always a man), a trauma in his past, and a landscape, often including an ocean, representing or complementing the protagonist's emotions or memories. Thalamus's particular wrinkles on the genre are its beauty, disinterest in realism, and subtle puzzles. Unfortunately none of that amounts to a compelling game.

That first characteristic is the most immediately obvious. Thalamus unstintingly uses the power of the Unreal engine to create some vividly beautiful and dynamic scenery. Some unfortunately spritish bushes aside, almost every inch of the world looks glorious. This game puts its visuals to better use than some of its genre cousins, since unlike them, it creates a world that seems fittingly fantastical for the interior of a human mind.

As this is unquestionably a subjective world, Thalamus gives its protagonist unusual powers. By standing (or placing a representation of himself) in particular spots, he can summon fog, change day to night, or alter time and the weather. Some of these powers have strange adjuncts: the fog power doubles as an ersatz jump, for instance, while creating rain causes wooden platforms to raise or lower. These powers and the landscape combine to produce many subtle puzzles. None of them are really difficult to solve given careful observation, but the quality of them degrades over time.

Like many others like it, Thalamus afflicts its protagonist with a painfully slow walking speed, even in the opening scene when he's desperately rushing to save his child. In most puzzles this is a minor irritant, but it becomes a source of frustration late in the game when there are several puzzles that put the player's motion in competition with other entities—a towering colossus, or threatening spheres of corruption. The work of dealing with these obstacles in a game that is otherwise not dependent on twitch feels like unproductive difficulty that doesn't serve the ideas of the play or the narrative.

The story happening here manifests in the form of protagonist monologues that, while sometimes awkwardly worded, are at least not florid. Unfortunately, they're delivered with all the verve of a public reading of the Starbucks menu, and the mixing doesn't help. The bad VO really stands out against the quality of the rest of the game and unfortunately the storytelling leans on it almost exclusively.

This points to the central weakness of Thalamus, which is that the play almost never has anything to do with the story. There's a game going on in the hands of the player, and a story being droned on about by a narrator, but there are very few places where those two things connect on even a symbolic level. Why these puzzles? Why these abilities? For all that the protagonist yammers on about his backstory, I almost never saw it surface in his supposed internal experience.

The game's climax is meant to pay off everything the player has learned, but instead becomes the sum of the game's own sins. It has some clever puzzles, but most of them seem disconnected from the rest of the world, and the effort involved in sluggishly dodging too-fast enemies sucks all the joy out of them. Meanwhile, a "villain" rants irrelevantly, except when he points out how trivial the game has been. A game that comments on its gameness represents the most pernicious form of intellectual onanism afflicting the indie scene, but I'll let it slide here since the point is well taken.

Mind: Path to Thalamus is beautiful and has several elegant puzzles, but it doesn't tell any story with those attributes, nor does it tell a good story with anything else. Rating: 6 out of 10


Disclosures: This game was obtained via retail purchase and reviewed on the a home-built Windows 7 PC equipped with an Intel i7 processor, 8 GB RAM, and a single Radeon R9 270X graphics card. Using this setup, considerable screen tearing was apparent even with Vsync enabled; this is reportedly the result of some incorrect settings in the UDK options. Approximately 4 hours of play was devoted to single-player modes and the game was completed.

Parents: As of press time this game has not been rated by the ESRB. The game contains nothing of concern except perhaps some bad language.

Deaf & Hard of Hearing: Subtitles are available for the game's monologue, though at one juncture the sound of the voice itself is important to the story so you might miss something. In certain areas sound cues are particularly important as a guide. In some cases there is also a visual guide and in others it's possible to muddle through without the sound cue. However the game may be slightly more difficult or frustrating. I do not anticipate any problems for colorblind individuals.

Sparky, you really need to check out the king of the walking simulators, 2012’s Miasmata (subgenres: survival, cartographical, other(spoilers)).