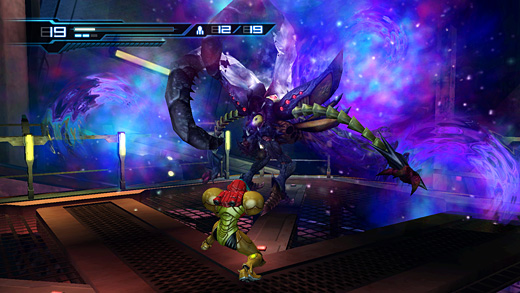 HIGH When the game starts inverting and magnifying gravity.

LOW The cut-scene preceding a major boss encounter that depicts Samus as a sobbing child.

WTF Could you have maybe let me use the Varia suit before I spent all that time dying from heat?

The Metroid series contains some of the most celebrated games in history in part because Nintendo has been willing to be innovative. The Metroid Prime games were a radical departure from the template of the preceding entries, but after three successful outings their potential had been pretty well explored. Thus, Nintendo handed Metroid to Tecmo's Team Ninja, a development team known for the brutally intense and difficult Ninja Gaiden games. Of course, Team Ninja is also known for its soft-porn spinoffs of the Dead or Alive series, a heritage that might not bode well for a series with a female lead. Unfortunately, their contribution to the series canon is more evident in the storytelling than in the gameplay. Other M adds almost nothing positive to Metroid.

Other M concerns protagonist Samus Aran's work assisting a team of marines investigating an enormous, derelict research starship. That kind of restricted environment offers a rather small set of unique environments, a clear weakness for a game about exploration. Except for a short zone that plays around with gravity, however, Team Ninja squanders even that limited potential, retreating to the old standards: jungle zone, ice zone, lava zone. Yes, lava on a spaceship. All these places are rendered with exceptional beauty (I occasionally forgot I was playing on an SD console), but the overbearing familiarity was impossible to escape.

The player moves Samus through this space using the Wiimote's D-pad, firing with the 1 button and jumping with 2. This system works very well thanks to a very competent auto-aim that generally managed to shoot the target I wanted to hit. If more precise aim is called for, pointing the Wiimote at the screen enters a first-person point-and-shoot perspective, which is the only way to use missiles and is required during most boss fights. As Samus cannot move in this state, the viewpoint represents an added tactical challenge in the most dangerous battles.

There's nothing wrong with this control scheme per se, but there's nothing particularly right with it either. The D-pad can be a twitchy (and physically uncomfortable) way to control movement in 3-D space, which is why analog sticks are such popular control devices. The Wii has an analog stick available, and there was no reason not to use it. Shifting the Wiimote around adds almost nothing to the game beyond the inconvenience of actually doing it, and it comes across as a pointless gimmick rather than a well-considered design. Indeed, the same could be said of the first-person view itself, since the nunchuck's additional controls would have allowed missile lock-on without requiring the perspective switch. Beyond that function, first-person view is only really used for some irritating pixel hunts the game would have been better off without. 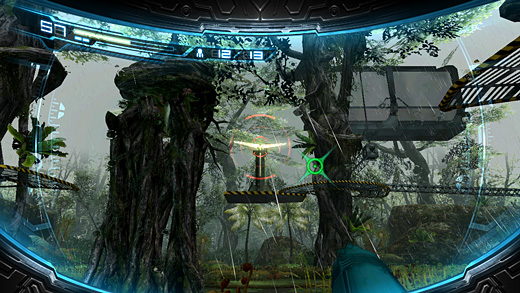 Nonetheless, combat and platforming control quite fluidly and are generally great fun. Despite Team Ninja's reputation for creating hard games, progress through most of Other M is relatively easy. The difficulty, however, often jumps up obnoxiously, not just in boss fights but also in some scripted one-time encounters. Because health cannot be collected from enemies and the only healing possible requires Samus to stand still, death can come quickly early on. Closely-spaced restoration points make death less painful, but no less frustrating.

The frustration is greater because it's obvious that Samus shouldn't be dying at all, and is only in peril because her suit is not operating to the fullest of its abilities. This has been a constant of the Metroid series, and never a strong point. It's particularly galling in Other M, however, because it reflects not an absence of those powers but a prohibition on their use. Samus is dying because some guy told her not to use the good gun, and she seemingly lacks the pluck to even suggest that maybe he should let her use the heat-resistant suit in a room where she is literally dying from proximity to lava.

The story has a sexist subtext, to be sure, but the top level of text was so bad I almost didn't notice it. If Samus was "Samuel" this narrative would still be appalling, not only because it makes no sense on its own terms but also because it undoes the character. Samus has always been depicted as a tough, strong-willed fighter, but this game recasts her as an emotionally vulnerable wreck of a person. In this respect the story reaches its nadir in the boss battle against Ridley, a monster Samus has fought and destroyed at least half a dozen times before. However, in this scene, the encounter reduces her to a sobbing child so incapable of reacting to the threat that she must be rescued by a squadmate.

It is no aid to the story that Samus's long monologues are delivered in a flat, somnolescent tone that suggests she has been drugged for interrogation. The monotonous voice acting simply can't support the idea that the events of this story have any emotional significance for Samus, and the writing can't get the job done on its own. Furthermore, Other M terminates in a series of insufferable cut-scenes that introduce a new character and try to make her a relevant and sympathetic figure by dropping an enormous payload of backstory. Even by the standards of JRPGs it's ridiculously talky and melodramatic, and it sucks the last wriggling bit of life right out of the game, even before a man steps in at the last moment to really save the day.

Without its irritating narrative, Other M would be a commendable, if not particularly inspiring, exploration-based shooter. If the box had borne some other name, I might even have been able to react to the story with mere boredom rather than anger, but the box says Metroid. The innovations are few, and the unskippable story is outright destructive of the series' heritage. Rating: 6.0 out of 10.

Disclosures: This game was obtained via retail store and reviewed on the Wii. Approximately 14 hours of play was devoted to single-player modes (completed once).

Parents: According to the ESRB, this game contains animated blood and violence. Some scenes depict animals that have burst open from within and there are a few corpses here and there, though they don't look particularly horrifying.

Deaf & Hard of Hearing: There are no essential audio-only cues. Subtitles are available, but I recommend you turn them off.