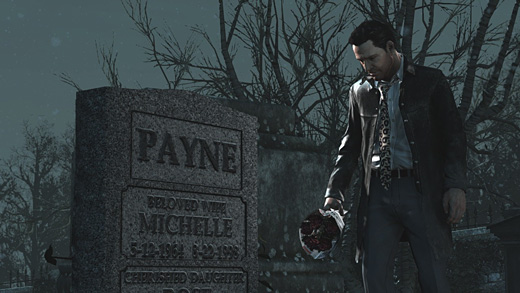 HIGH Soaring through the air, blowing away dozens of gangsters with my dual pistols like a John Woo hero.

LOW Did he seriously just shave his head as a disguise?

WTF Why doesn't Max just shootdodge out of all these situations where a few unarmored guys are holding a gun on him?

Thanks to successes like Grand Theft Auto, Red Dead Redemption, and Bully, Rockstar has become almost synonymous with open-world games, albeit ones that have notable plot and character issues. A linear third-person shooter like Max Payne 3

might not seem like it belongs with this oeuvre, but the reality is that the Payne series's noir sensibility fits well with the Houser brothers' cinematic aspirations. Moreover, a short, linear game might be just the thing to reign in the Housers' excesses and really showcase Rockstar's design and storytelling skills. Alas, the seemingly interminable development process for Max Payne 3 produced nothing more than a conflicted, contradictory mess.

Max Payne appears in this game as yet another incarnation of Dan Houser's archetypical protagonist, the dumbass with a thousand faces. With his brains pickled by drugs and alcohol, Max at least has an excuse for doing whatever dumb thing Houser requires him to do between bouts of murdering dozens of people.

There's a whole twisted tale woven around the killing involving police corruption, organ harvesting and kidnappings gone wrong, splashed with a thin veneer of anti-American sentiment. Without a single sympathetic character to get behind, however, the story is just a giant knot not worth unraveling. The populist angle is also laughably executed, not least because Max slaughters the impoverished while sparing the wealthy and powerful men who manipulate them.

Once a policeman, Max is now in the murder business. Even if he wanted to play detective, he couldn't. In Sao Paolo, Max doesn't know the streets or speak the language, so he has no way to gain any insights on his own. His allies and enemies must painstakingly explain the plot to him, like parents instructing a particularly stupid child. In this setting, Max can do nothing to further his own cause but shoot people. So, shoot he does, murdering his way through legions of Sao Paolo's criminals and corrupt cops. 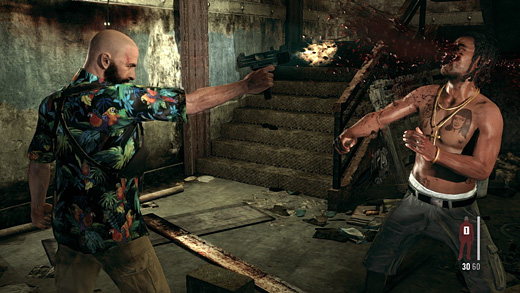 Like Brandon, I found the quantity of violence jarring. Max Payne 3's story and presentation have a firmly noir vibe, but the fusion with a balls-out action onslaught seems a mismatch, like Arnold Schwarzenegger performing a Phillip Marlowe patter over the bloody third act of Commando. More egregiously, several events in the story only happen because cut-scene Max can't do the things that gameplay Max can. How different the story would be if only he could use bullet time when it really mattered!

When Max does get to use it, bullet time still crackles with excitement and Rockstar has fleshed it out with mechanics that allow for John Woo gun leaps, here called shootdodges, and last-chance, life-saving shots. Unfortunately, these cool features have been shoved into sluggish cover-shooting battles against bullet-sponging foes. While the mushy, slow-moving cover mechanics might mesh with the physical prowess of the game's paunchy, whiskey-soaked protagonist, they feel completely disconnected from the balletic bullet-time gunplay.

Worse, since Max's enemies will often survive his bullet-time onslaught, actually employing the game's best mechanics can lead to a rapid death. Shootdodging leaves Max laying on the ground, exposed, giving his surviving foes a fantastic opportunity to turn him into Swiss cheese. The game's habit of steadily trickling enemies into an area also limits the usefulness of the shootdodge, since it can't even safely be used for a climactic attack on the last few mooks hiding behind the nearest chest-high obstacle. This design encourages playing Max as a burly, ginned-up tank turtling behind cover. Any player who uses bullet time outside of the specific moments Rockstar has scripted for it is almost certainly doing the wrong thing.

has a healthy helping of ludo-ludic dissonance to go with the more typical ludonarrative variety. The game's silly, overly convoluted story can't work unless it ignores bullet time, and the combat design doesn't work well with it either. Max Payne 3 would be a better, more coherent game without bullet time, but without it there's no way to justify suffering through the game's idiot plot, cinematic affectations, and testudinal combat. Instead of forcing Rockstar to address their failings, Max Payne 3 merely magnifies them. Rating: 5.0 out of 10.


Disclosures: This game was obtained via retail purchase and reviewed on the Xbox 360. Approximately 8 hours of play was devoted to single-player modes (completed once) and 0 hours of play in multiplayer modes.

Nice one, Sparky.
I wanted to go into the class warfare stuff too, in my main review, but didn’t feel like I had the space.