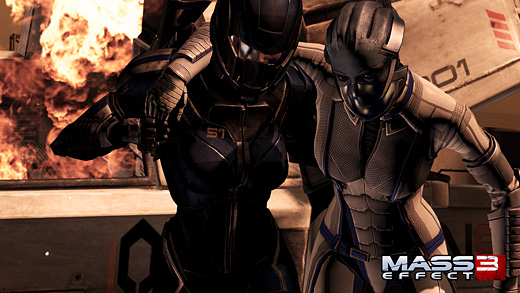 We should have known the conclusion would be trouble. Ending a game like Mass Effect 3 poses a special set of problems, because a central attraction of Western RPGs is that their systems respond to player choice. Mass Effect and its like are the classic case of games that generate stories through collaboration between designer and player. Drawing things to a close, however, requires the hand of the developer to show, often in ways that seem unattractive. This famously happened in the case of Fallout 3, which had an ending so widely disliked that the developers ultimately retconned it with DLC. As I write this, there are petitions to see the same happen with Mass Effect 3. This effort exists because the game's ending does not respect the player's investment in the universe or creative force in the game.

The Mass Effect series has always presented itself to players as a vehicle for them to make important, if difficult, decisions. From the first game, the player's choices as Commander Shepard have dictated who lives and dies, with results that ultimately define the fate of entire species in the trilogy's finale.

The end of Mass Effect 3 disregards the player's choices on both galactic and personal scales. In contrast to the exquisite, if occasionally opaque, ways the player's decisions dictated the outcome of Shepard's suicide mission in Mass Effect 2, Mass Effect 3's finale is essentially a railroad. Provided a player has gathered enough military force, all three possibilities for dealing with the series-long villains, the Reapers, are available. The player can opt to control them, destroy them, or join with them in an organic-AI synthesis of some kind. The choice only determines the primary color and some other minor details of an ensuing cutscene. This denies the player any meaningful feedback about this decision, and the game's refusal to elaborate in any serious way on what happens to the galaxy undercuts the importance of choices made in this and previous ME games.

However, these scenes also destroy the galaxy that the games spent so much time developing. No matter what the player chooses, the mass relays detonate spectacularly, releasing massive shockwaves. In the world of the game these relays are the lynchpin of galactic travel and commerce, and their removal separates its the various worlds by voyages that take years, rather than moments. Demolishing the paths of commercial and cultural exchange that defined the galaxy, however, is a minor problem compared to what the game itself states will be the result of the exploding relays.

Although it has recently been demonstrated that mass relays can be destroyed, a ruptured relay liberates enough energy to ruin any terrestrial world in the relay's solar system.

Did you choose to cure the genophage, or do what the Dalatrass asked? It doesn't matter. Tuchanka and Sur'Kesh were destroyed.

Did you save the Geth, or the Quarians? Who cares? The fleet is wrecked and Rannoch has been obliterated.

Did you take back Earth, as the game's ad campaign promised you would? Not in any meaningful way: the world you fought to save is gone.

Was your Shepard a paragon? Too bad, buddy; now she's the galaxy's worst war criminal.

Destroying the relays nullifies not only the major decisions Shepard has made, but even the mission she undertook. The Reapers did not harvest all life, Shepard murdered it instead, eradicating not only all the principal civilized worlds of her time but also any primitive cultures unlucky enough to live near a mass relay. 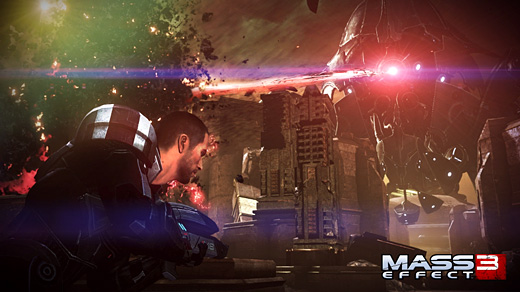 Even the more personal choices were ignored, at least for my renegade Shepard. As the conduit exploded around her, she flashed back to images of her pilot, Joker, her mentor, Anderson, and… Liara? Well, Shepard had a fling with her once, but that was years in the past. They're just friends now. My Shepard had finally fallen for Garrus, even made love to him not long before the final battle. Yet she saw no vision of her lover in her final moments, nor even of her best friend outside the crew (Wrex, obviously). Instead, my Shepard's thoughts were apparently with the pilot she thought was an irresponsible cut-up.

At least Joker manages to save a few lives. Although almost all of Shepard's crew was with her on Earth for the final push against the Reapers, they somehow end up on Shepard's vessel, the Normandy, racing at lightspeed to escape the shockwave. The ship crash-lands on some hitherto unknown garden world, dooming Garrus and Tali to a horrific death by starvation. As organisms built on D-amino acids, they find L-amino life indigestible. Tali will likely have the worst of it, as when she inevitably tries to eat something it will certainly cause a painful allergic reaction on top of being non-nourishing.

This absurd sequence, which ignores not only the details of the game's universe but even obvious aspects of the immediate plot, points to the ending's failure to adequately mesh even with its own fiction. This also shows through in the explanation given for the Reapers themselves, which is that each Reaper is used to store an organic civilization so that all organic life will not be wiped out by synthetic lifeforms. In one sense, this is troubling because it implies that killing a Reaper is an act of genocide. The larger problem for the ending, though, is that it leans on the series' least interesting theme, and even then disregards everything that the games have conveyed on the subject.

After all, the genuine synthetic intelligences present throughout the series have generally not been inimical to organic life. The robotic Geth, although initially presented as aggressive foes, are later shown to have been the victims of pre-emptive attacks by the Quarians. Even the ones that joined the Reapers in the first game did so out of a desire for self-advancement, not out of intrinsic malice towards organics. The other true AI the series presents is EDI, whose voluntary aid repeatedly proves crucial in helping Shepard's missions succeed, and who might even be in love with Joker. Though the game undercuts itself by almost always placing synthetic lifeforms on the business end of Shepard's gun, in dialogue and plot the synthetics are neutral, or even allies. 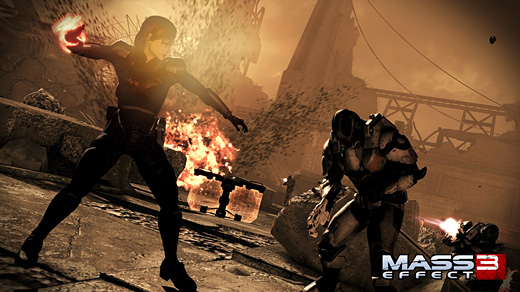 Yet even though the story of the Mass Effect games refutes the necessity of war between AI and organics at every turn, the finale presents their conflict as inevitable. The ending does not even give Shepard the option to use the truth about the Geth to argue against the Catalyst that controls the Reapers.

In this and other ways, the ending doesn't reward the player for paying attention to the world the games have presented. Indeed, the more the player understands about the Mass Effect universe, the worse the ending seems. For a game series that had a rich backstory conveyed through dialogue, detailed factsheets, and miles of text, disregarding the lore is a significant act of disrespect towards the invested player. It argues that their interest in the world does not matter, not even to the world's originators.

Shrinking the possible outcomes of Shepard's final confrontation down to a few options allows the developers to exert the maximum amount of control over those moments, and that's not necessarily a bad thing. However, by ignoring the series' lore and discarding the effects of the player's choices, Mass Effect 3's ending disrespects the player's investment and engagement in the game's world. Handled that way, the conclusion argues that the player's time and emotional attachment have been wasted.

This transforms the developer-player relationship from creative collaboration to adversarial dictation. That transformation is exacerbated by decisions – the day-one "From Ashes" DLC released alongside a game-ruining face-import bug, Ashley's new look, and Jessica Chobot's cameo – that seem openly contemptuous of the series' core fans. Destroying the universe on their way out the door is the developers' ultimate attempt at seizing control of the creation, an exclamation that "This is mine, and you can't have it!"

This explains some fan reactions to the ending. A petition to alter the ending through a patch or DLC may seem unrelated to a forum post reinterpreting the existing conclusion as a hallucination. Both responses, however, represent players' attempts to seize control of the narrative back from the developers, by choosing a new series of events, or by choosing a new lens through which the existing events will be viewed.

Upset as these players are, a poor ending does not undo a wonderful game. Up until its last 15 minutes, Mass Effect 3 is excellent, a remarkable and moving culmination to an extended saga. The game's conclusion does not undo the excellent cooperative storymaking that went on in the previous 60-odd hours, or the player's investment in the universe. It does, however, disrespect them.

While I don’t agree with the rest of the game beside the ending being almost perfect, I completely agree with what you wrote. All I hope is that if they make an ending DLC, it will be free (I doubt this after the Day 1 DLC, though.).
I also liked you providing a link to the definition of respect. 😀

… and everyone else responsible for getting this piece onto the site.

This is exactly the sort of thing I expected to see on this website. Here’s to hoping, with more understanding, the guys will revisit the subject for a few minutes on the podcast.

Excellent article. I couldn’t agree more. You’ve perfectly encapsulated exactly what was wrong with the game’s ending, while also taking into account some of the necessary limitations of actually bringing a series such as this to an end. The part that strikes me the most about this article, and one that is not always mentioned in other analyses of the ending that I’ve read, is the fact that it’s not so much the railroading that is an issue, it’s the MAJOR disregarding of established series lore that just completely slaps the player in the face and brings the game to… Read more »