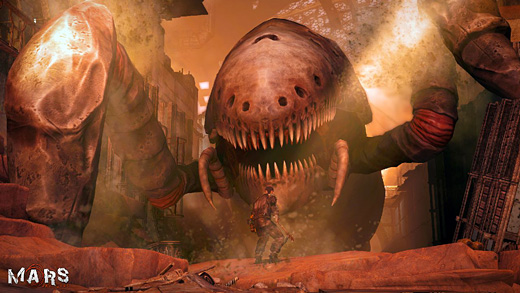 HIGH Killing the blisteringly incompetent leader of the Resistance.

LOW Having to run back and forth through a whole city repeatedly for the serial killer quest.

WTF I'm in a major city, and the best available weapon is still a metal rod with some razor blades riveted to it?

, the successful terraforming and colonization of the red planet was wasted in a cataclysm that destroyed civilization and reduced its habitability even further. With the few truly high-tech artifacts remaining held in the hands of a pseudo-magical caste, the common people go to war with bits of rebar and pneumatic guns, struggling for what's left of the ruined planet.

In this grim retro-future, the battles that erupt within societies are even more dangerous than the ones that take place between them. Mars: War Logs attempts to tell that tale, but gets lost in narrative and mechanical distractions.

Despite being set in a backsliding sci-fi dystopia, War Logs hews rather closely to the standard action-RPG formula. Protagonist Roy and his partner of the moment travel relatively freely through the large areas that make up each major chapter, taking out bad guys while looting chests and performing quests. The focus of the real-time combat encounters is brutal close-quarters melee. The action in these fights is reasonably engaging, although the third-person camera often gets trapped in an inconvenient spot.

Beyond whacking people with a razor-bedecked bit of rebar, Roy has a slow-firing pistol and magical powers (technomancy) at his disposal to deal out ranged damage and exert crowd control. That's essential, because War Logs often throws a half-dozen or more enemies at Roy and his partner, and getting surrounded usually means getting stun-locked to death.

If Roy runs out of ammo, mana, or time to charge up his attacks, the only hope for victory is to control positioning, either by running or by heavy use of the dodge-roll. Both tactics are subject to the game's camera woes, however, and inconsistent hit detection interferes with both damage avoidance and hit-and-run attacks. When everything works out, the fights can be flowing and elegant, but this experience is all too rare.

Roy can also sometimes sneak into combat zones and clear out enemies before a melee breaks out. Although stealth forms one of the game's three skill trees, though, it's never quite clear how the system works, and many situations (including the game's whole finale) simply can't be addressed without a stand-up fight.

Once his enemies are down, Roy can despoil them and, if he wants, finish them off for extra cash and a little less karma. This turns out to be a weak morality system because the amount of money gained is tiny, and even if it weren't, the game's equipment progression is busted. There's almost never any reason to buy anything, and rarely any reason to use the game's limited crafting system. Thus, the game lacks the competing incentives to create moral tension. 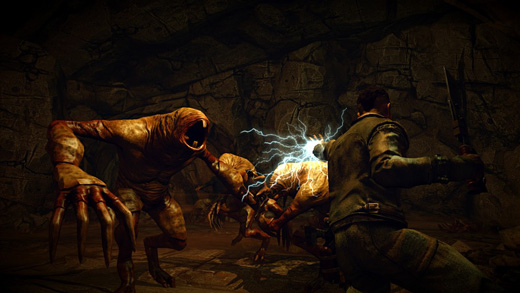 That's a shame, because the character progression system is well-designed, despite the weakness of the stealth tree. Each time I leveled up, I felt like I could use at least two more skill points than I had, and upgrading skills produced transparently useful effects. Mars: War Logs just doesn't provide the kind of alternative resource-focused systems it needs to complement the strong experience-based progression, or to justify all the looting it wants players to do.

The game's storytelling is equally up-and-down. The strong first act does a competent job of showing Roy's efforts to break out of the prisoner-of-war camp he's been trapped in. Although the segment relies a bit too much on prison-movie clichés, the game successfully establishes the major characters and their relationships, and the scavenging and crafting mechanics fit well with the narrative.

It's the second act that kills Mars: War Logs.

Here, the action moves to a major city that's functionally a series of long, inconveniently-connected corridors. The rather thin central plot of this part gets lost behind a large array of sidequests, most of which involve a lot of tromping back and forth across these hallways to deliver some junk hither or intimidate some punks thither.

The chapter is backloaded with meaningful events as Roy loses one companion and gains several new ones, and has to make a supposedly major choice. Unfortunately, War Logs doesn't spend any time establishing the stakes or consequences of this decision, so it feels weightless and perfunctory. This makes much of the second act feel like a series of pointless digressions.

The game picks up again in a third act set in an agricultural area, but this reflects another symptom of the game's problem, rather than providing a cure. Having put off its own core plot for so long, War Logs is obliged to include major new developments in each quest, making the pace feel snappier. These discoveries, however, are all busy laying the groundwork for the story, expanding the world rather than narrowing it down for the climax.

The inevitable consequence is that War Logs's ending disappoints. The few mysteries that the indifferent world-building sets up don't get an answer. Worse, the final moments of the game make Roy a spectator in his own story. Depending on player choices, the game's “big bad” dies at the hands of another man in a cut-scene after revealing a disappointingly narrow plot, or offscreen entirely.

In a way, that latter ending fits Mars: War Logs

best. It's a competently executed brawler-style RPG, with a political story at its core that actually has some potential. Irrelevant mechanics and sidequests get in the way of the game's best aspects, however, and Mars: War Logs never manages to focus on what's important. Rating: 5.5 out of 10.


Disclosures: This game was obtained via Steam purchase and reviewed on a  home-built Windows 7 PC equipped with an Intel i7 processor, 8 GB RAM, and a single Radeon 6800 HD-series graphics card. Approximately 20 hours of play was devoted to single-player modes (completed once, with one repeat of the third act).

Parents: As of press time, this game has not been rated by the ESRB. Mars: War Logs contains alcohol references, language, sexual content, and violence. Some content may be triggering for survivors of sexual assault, including an attempted rape and and a character relating a personal history of abuse. One character's apparent mental illness is treated as a joke by other characters. In light of this I expect it would be rated M, and feel it is only appropriate for teens and up.

Deaf & Hard of Hearing: The game contains no essential sound cues and all significant dialogue is subtitled. Enemies occasionally make an alert noise to signal the start of battle, but this is accompanied by changes in player-character stance and the HUD, so it doesn't constitute any real disadvantage.