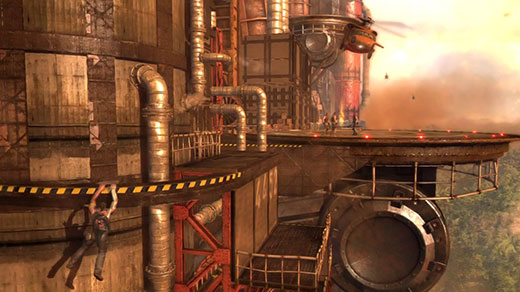 HIGH The fight against the tentacled rain god Chaac.

LOW The escape event in the crumbling ruin.

WTF Where did this guy get all these helicopters?

I want to like Marlow Briggs and the Mask of Death more than I actually do. I appreciate that it's a colorful character-action brawler without a serious bone in its body, and I love that it plays with Mayan mythology in a medium that barely acknowledges the existence of ancient cultures outside of east Asia and Europe. Marlow Briggs is also playful and varied as a game, exploring territory beyond the jumping and brawling typical of its genre. In the end, though, there's no getting around the fact that Marlow Briggs and the Mask of Death just isn't satisfying to play.

Marlow, a smoke jumper from America, starts the game by visiting his archaeologist girlfriend in an unspecified Central American country. Almost immediately her sinister employer has Marlow killed and absconds with the girl. However, the mystical weapon he used to off Mr. Briggs imbues him with magical powers that he subsequently uses to wreck everything. He's also accompanied by the titular Mask of Death, inhabited by the spirit of a long-dead Mayan king. If Marlow fails, the bad guy will gain unimaginable power and something something end of the world.

I wasn't paying much attention to the story, and it seems like the developers weren't either because major developments—like a guy coming back from the dead and bantering with a floating ritual mask— pass without much explanation, or even much comment. Marlow Briggs puts much less effort into what it's delivering than it does into the style of delivery, and this actually ends up being a success. With the exception of some ill-advised audio diaries, the narrative comes across with more wit and verve than it probably deserves. Even the decision to render some action sequences as shifting dioramas rather than full cut-scenes (likely for budget reasons) turns out to be unexpectedly stylish and interesting. Nothing here will be remembered as classic, but it is light and enjoyable.

The same cannot be said of the combat, unfortunately. Marlow attacks with combos in typical character-action style, but it doesn't flow well. Timing is finicky and inconsistent to a point where I could practically dial in some combos, but would fail others if I was a split-second off. Chaining combos was overly tricky with some weapons, although this is an aesthetic rather than a gameplay complaint because racking up hits didn't seem to have any consequences in terms of increased damage or any combat "grade". The on-screen action also felt jerky, both in fighting and platforming, like Marlow was moving too quickly and then pausing too long.

The game's camera doesn't do it any favors either. Marlow Briggs uses a tracking viewpoint that isn't under the player's control, and I often found it was not in the most fruitful position, or that it shifted unexpectedly. This was a particular issue in more involved battles. In the fight against Chaac, for instance, while Marlow climbed up a giant, heaving tentacle he was off the screen entirely at some points. My instinctive efforts to shift the camera using the right stick only made matters worse, as this is used for a directional dodge.

The game offers four weapons that mostly differ in the rhythm of combat. Some of them clearly do more damage than others, but despite the fact that Marlow is wielding giant blades of obsidian, the weapons feel like they're made of cardboard. Marlow chops his way through hundreds of mercenaries and bugs, but he rarely feels like the badass the game makes him out to be.

The enemies are the final problem here—they're painfully overused. I lost count of the number of times I had to face off against giant scorpions, and I was just depressed when the game started handing me more of the same boring enemies I'd faced before in new "possessed" forms that needed an even longer application of the same dull strategies before they'd keel over. It's not that Marlow Briggs doesn't have some tactically interesting enemies, it's just that they get used too little, and the game is content to recycle rather than grow.

Where Marlow Briggs does get varied is in applying different styles of play throughout. It has turret sequences, vertical-scroll shooter segments, fast-paced runner-style escapes, and even a lander game in the credits. Unfortunately, none of these approaches feel well-tuned. Aiming the turret never feels right, enemy shots are too hard to see in the shooter bits, and the escapes are trial-and-error nonsense. In the lander game, I passed through the geometry and out of the world, and wasn't able to return.

What should be an enjoyable variety, then, just feels like a lack of focus. The gameplay in Marlow Briggs and the Mask of Death feels like it's trying too many things rather than doing one thing well, and as a result both the peripheral stuff and the core brawler feel sloppy and uncomfortable. This is a game that could have badly used more polish. Still, it does many things I like, and if Zootfly brings this hero back for another colorful adventure, I'd be willing to give him a second chance. Rating: 5.5 out of 10


Disclosures: This game was obtained via retail purchase and reviewed on the Xbox 360. Approximately 8 hours of play was devoted to single-player modes and the game was completed.

Parents: According to the ESRB, this game contains violence, blood and gore, partial nudity, and strong language. Marlow spends a lot of time slashing and stabbing people with a giant obsidian scythe, so there's a fair amount of blood. Compared to other members of the genre (e.g. God of War or Dante's Inferno) it's fairly tame, though. It's probably fine for teens.

Deaf & Hard of Hearing: Major dialogue is subtitled and the game does not have any essential sound cues. Some incidental dialogue (e.g. announcements in the background) lack subtitles. Overall, I don't anticipate any problems.