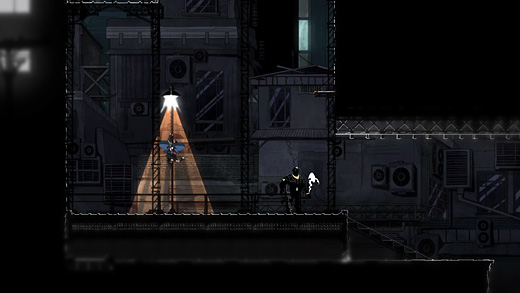 HIGH Ghosting through a level without killing a soul or ever being spotted.

LOW Getting blown into a bomb by another bomb and dying.

WTF So a bomb will go off if I bump it or step on it, but not if I drop it to the floor?

We all know how a stealth game goes. The player creeps along, trying to remain unseen, watching the guards. When they come close, the nervousness mounts. "Am I hidden well enough?" the player wonders, "What if that guy sees me? Oh man, I'll be so screwed…"

Stop. That's not how ninja operate.

A ninja does not cower in a dark corner; he lurks. He wants his foe to approach, longs for the moment when the enemy enters his deadly reach. To a ninja, hiding is an aggressive act, and Mark of the Ninja

Transparency is key to this success. Mark of the Ninja never lets the player wonder how the world will react to him. Visibility and audibility are binary, and always clearly communicated through visual systems. Circles show how far a sound will spread (and reveal the footsteps of enemies), while light and vision appear as obvious cones. Illuminated characters appear in full color in the beautifully-drawn world, while shadowed characters are black and white. When a guard gets suspicious, the place that drew his attention is marked, and if he sounds the alarm, its duration is shown.

The player is never left in doubt. He always knows whether he can be seen or heard, though he may not be entirely sure whether he can make it from one safe spot to another. Mostly generous checkpoints make sure experimentation isn't excessively punished, and failure never feels frustrating. A few AI freakouts aside, Mark of the Ninja's meticulous construction makes every death clearly the player's fault, while its transparency means he never needs to wonder how he erred. This makes the player the master of his environment. 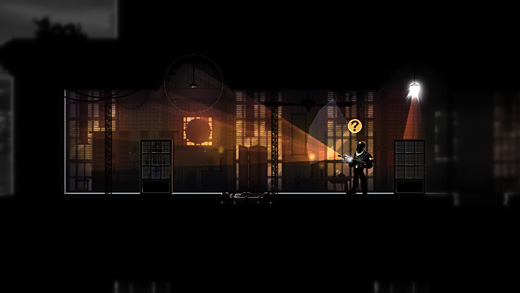 Through this alone the game might be impressive, but Mark of the Ninja goes a step further because its stealth mechanics are as much about controlling enemies as they are about avoiding them. The player can destroy lights to create darkness, but I found myself often doing it to distract guards with the noise. With a limited arsenal of tools (up to and including the slain bodies of his foes) the ninja can manipulate his enemies, using their own dedication, curiosity, and fear against them.

Controlling the enemy can open new routes, of course, but it can also mean luring foes to their deaths. Although its main character can never survive in a straight-up fight, Mark of the Ninja offers a number of different ways to murder pesky guards, from slaughtering them in air vents to poisoning them with a hallucinogen that causes them to randomly shoot in all directions—including at their friends. The more colorful killing techniques must be purchased using an experience system, but Mark of the Ninja is carefully balanced to ensure that non-fatal sneakiness is rewarded just as well as bloody-handedness.

For most of its duration, Mark of the Ninja unfolds beautifully, with each new wrinkle to the gameplay adding cleanly to design. About two thirds of the way in, however, the game hits the twist and immediately starts to falter.

The new traps in the subsequent levels seem to have a different logic than those preceding, making progress there feel more like relearning the world than advancing mastery of it. The game's story also wobbles, focusing overmuch on its own invented lore rather than its more successful illustration of the parallels between the ninja and their enemies. Things stabilize, however, and Mark of the Ninja ends on a strong note, although its perfunctory monster-or-chump choice detracts from the visually spectacular finale.

's design. Its stealth-as-power mechanics perfectly articulate the mystique of the ninja without compromising on challenge. Can someone make a better ninja game than this? Maybe, but I've no idea how. Rating: 9.5 out of 10.


Disclosures: This game was obtained via retail purchase and reviewed on the Xbox 360. Approximately 8 hours of play and counting was devoted to single-player modes (completed once).

Parents: According to the ESRB, this game contains strong language, blood and gore, intense violence. Look, you're a ninja. You're going to be stabbing a lot of dudes, and they will bleed profusely. Or your hallucinogenic poison will cause them to shoot their buddies and then themselves. Or your spike trap will gruesomely impale them before you dangle their corpses from high places to terrify their friends. Bottom line: dudes bleed, then die. Also, there is some alcohol use.

Deaf & Hard of Hearing: Every sound that matters in the game is represented visually, from dialogue (subtitled) to environmental noises (sound rings). Certain sound or alert rings may be difficult to see for colorblind individuals.

I would have given this game a 10. It is so refreshing and well done. I can over look any shortcomings the game is that good.