Ordered a Tapestry, Got a Quilt 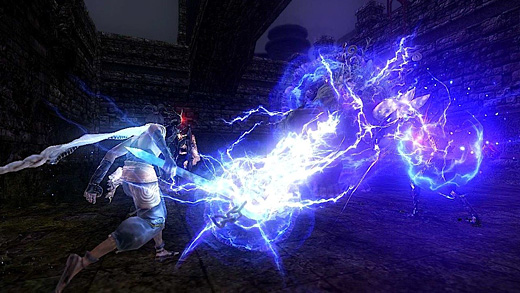 HIGH The slurping giggle the Majin does when you're bringing him fruit.

WTF Quit telling me you're going to use the lightning and just use the freaking lightning, big guy!

Although critics and the gaming press have a fondness for the big names, most games don't have a single auteur guiding their design. AAA games are usually made by teams of designers, artists, and programmers. In the best-case scenario, everyone gets on the same page and a coherent experience emerges. More often, we get a decent game where features seem like they came from a memo sent by the corporate office. Sometimes, what emerges is gibberish like Majin and the Forsaken Kingdom

; a game that feels like it was designed by a committee that never met.

The Majin of the title is a big, goofy troll-like creature that was once the protector of a mighty kingdom. Unfortunately, the kingdom was attacked by "darkness," the generic enemy that has destroyed a thousand worlds. Aided by a bunch of cute talking animals, a human hero must guide the big, dumb, baby-talking Majin to free the land from the clutches of darkness. This may sound like the basis for a light-hearted and fanciful game, but that impression doesn't hold up.

As examples, some of the animals talk in cute voices, but others talk like secretaries reading lines during a lunch break. The Majin's human helper isn't a child or even a teen, but a twenty-something dude with a scraggly goatee and the most freakish abs since Final Fantasy X. His appearance isn't particularly realistic, but the character model looks completely out of place next to the cartoonish Majin. Without the proper supporting cast, the Majin's broken speech quickly begins to grate rather than endear.

The dude part of the duo isn't much use in a straight-up fight, so much of the game features him creeping around in stealth-lite gameplay. That's not to say it's nonviolent: the stealth kills feature him ramming a spiked weapon into the back of an enemy, causing an eruption of black, oily fluids. The repetition of this disturbing animation is probably where the game earns its T rating. Stabbing enemies with the spike is also the way most of the stand-up fights end, although thankfully those kills aren't as up-close and graphic. 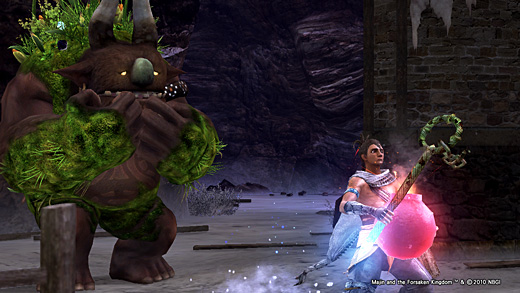 Although the Majin is large and strong, he gets swarmed easily, and the AI is better about verbally telling you it's going to use an ability than actually using it. As a result, combat often requires the player to thin out enemy forces through stealth or to take them down via environmental means like rolling boulders onto them before the Majin joins the fight. Once battle has been joined in earnest, most enemies are relatively simple to defeat, although some require a bit of tactical planning.

Progress through the kingdom substantially resembles a Zelda game. In each zone of the land one of the Majin's special abilities has been hidden. In an example of exceptionally bad planning, the local boss is always susceptible to the power it is lightly guarding, and defeating it unlocks the next area. However, Majin and the Forsaken Kingdom is decidedly low on vistas, as each of the main zones is really just a series of rooms with one or two exits. The game's geography always feels narrow and confined, never open and majestic, and the kingdom never feels like a whole.

Crossing these rooms typically involves a bit of platforming and solving a co-op puzzle with the help of the Majin's powers. The difficulty of both aspects fluctuates, in part because the game's controls are less precise than the problems they're meant to solve demand. I sometimes found myself missing a jump three times in a row, then making it, with no discernible change in my position or timing. Additionally, the lightning rods that transmit the Majin's electrical powers often must be placed very precisely, even though it's not easy to tell exactly where the player's character will put them down. As a result, it is possible to fail at a puzzle or platforming segment even if your general approach is right.

Despite these issues, with the assistance of a relatively forgiving save system and a fairly helpful map, a sufficiently devoted person should be able to reach the game's finale. The heroes free an awesome dual-sword-wielding woman who should have been the game's star, and confront the evil lord, who drones on and on about darkness like a rejected extra from Kingdom Hearts. Even the engagingly freaky final boss can't rescue the game from a trite, too-neat ending.

Majin and the Forsaken Kingdom

doesn't fail because any particular aspect of it is poorly made, it fails because its components don't fit together. The basic story, simplistic progression, cute animals, and goofy Majin feel like the basis of a playable fairy tale, yet the main character and his viscerally violent stealth kills seem to reflect an entirely different direction. Like the discrete rooms making up its world's geography, the mechanical and aesthetic elements of Majin and the Forsaken Kingdom never really form a coherent whole. As a result, a game that might have been magical and charming turns out dull and tiresome. Rating: 5.5 out of 10.

Shop Majin and the Forsaken Kingdom at Bizrate

Disclosures: This game was obtained via retail store and reviewed on the PS3. Approximately 10 hours of play was devoted to single-player modes (completed once).

Parents: According to the ESRB, this game contains animated blood and violence. The review mentions most of what you need to know. Honestly, T feels a bit high for this game, but in isolated moments it can be a bit disturbing.

Deaf & Hard of Hearing: Subtitles are available and there are no essential audio cues.