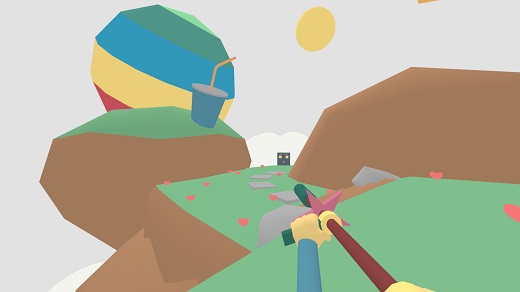 HIGH Bouncing along a chain of pads and nailing an enemy.

LOW Hearing a target ball launch and having no idea where it is.

WTF Occasionally the game plays a sound of people saying "Yay!" This never occurs after anything that should be celebrated.

I don't always watch speedruns, but when I do, I'm after something specific. I'm looking for the moment where a smart player does something inventive to get around the strictures the game's creators imposed. For me, the best kind of speedrun—the only kind worth bothering with, really—is the one where the player finds a loophole that short-circuits the game's winding routes, going directly from A to Z without touring all those other letters. That's not the kind of speedrun that Lovely Planet is about.

Lovely Planet is a minimalist shooter where the goal is to get through each level as fast as possible. There's no variety of guns, no story, no weird abilities, and no vehicle section. The levels have evocative names but don't resemble any real place—they consist of little islands in the sky that form narrow pathways, decorated with little bits of junk like airplanes, umbrellas, and balls. The bullets are slow-moving, which allows the player to shoot them out of the air. That's a useful trick, since some enemy bullets are heat-seeking and must be shot in mid-flight.

Target ball hits the ground? Level over; do it again.

Killed one of the friendlies? Level over; do it again.

Didn't kill all of the enemies? Level over; do it again.

Got hit by a bullet? Level over; do it again.

Step out of line in any way and the game's answer is to just try again. Fortunately the levels are short. Even going slowly I can't imagine any of them would take more than 90 seconds. This is little comfort, though, given the rigidity the game imposes. This is a world without loopholes.

I suppose it's clear I don't like this game, and in fairness it doesn't help that my reflexes aren't sharp enough to blaze through the way it sometimes demands. Even if I could reliably pull off a great run, however, I'd find Lovely Planet a bore. The slight charms of its oddball visuals and chipper soundtrack quickly wear thin, leaving it nothing to sustain interest aside from its dictatorial gameplay and trollish level design.

In paring its gameplay back to the basic elements of the shooter, Lovely Planet squeezed out any possibility for creativity. The only way to succeed with the game is to go at each challenge in precisely the way its developers intended. To me, that loses the magic that makes speedruns attractive. Those who want to use speedruns as a demonstration of their twitch skills will likely find Lovely Planet a 50-hour obsession. Nobody else really need apply. Rating: 5 out of 10


Disclosures: This game was obtained via publisher and reviewed on a home-built Windows 7 PC equipped with an Intel i7 processor, 8 GB RAM, and a single Radeon R9 270X graphics card. Approximately 2 hours of play was devoted to single-player modes and the game was not completed.

Parents: As of press time this game has not been rated by the ESRB. I can't imagine it contains any objectionable content, though it will likely be too frustrating for some children.

Deaf & Hard of Hearing: The game has no dialogue but there are some very helpful sound cues, particularly the noise announcing that a target ball has been launched. In addition, the world is made up of greens and reds, and because the shapes of the various blobs do not give a lot of guidance as to what is what, colorblind individuals may find the game impossible to play.

The visual style is definitely intriguing, but the repetitive tasks and lack of a clear over-arching goal would probably turn me off quicker than it did you.