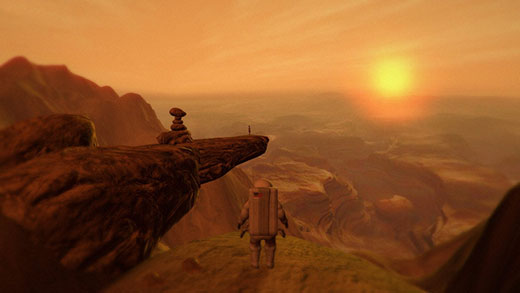 HIGH Awakening the portals in Ancients.

WTF Am I really blocking mighty geysers and lava arcs with rocks I'm strong enough to move? Is this seriously happening?

A one-way trip to another world, even one that's supposed to be teeming with life, seems like a pretty daunting proposition. The goal of sending just three people on such a journey, without any apparent way to communicate, isn't entirely clear. The object of this mission doesn't really matter to Lifeless Planet

, however, because everything goes terribly wrong right away. The lander crashes, the crew disperses, and the planet (as the title suggests) turns out to be something other than a thriving biosphere.

The survivor of that crash is controlled by the player, and what he finds is more bizarre than a lush landscape turned to wasteland. He soon discovers an abandoned Soviet town and a woman who can breathe the planet's deadly atmosphere. He follows her, hoping for answers, but she doesn't have the words to give them to him.

The gulf between the last Soviet survivor and the last astronaut is a parallel for the story of the planet and the Soviets themselves, whose ignorance of the true nature of this world had dire consequences. They pursued the knowledge they lacked, however, and so does the player's astronaut. His quest takes him across the vestiges of the biosphere and the ruins of a civilization that existed there previously.

The story that unfolds through the halting, often unproductive interactions of the two main characters and various supplemental materials is so strange that Lifeless Planet made me question whether the whole experience was a dream, even as events fit together in a way that made sense.

The effort to chase down answers leads the protagonist through a variety of environments. It turns out that the planet is not nearly as desolate as it initially seems, but the game offers no real way to fight off hostile lifeforms. Instead, the protagonist must usually figure out a way around them, rather than through them. None of the environments are truly mazelike, however, and although there are some platforming challenges built around a little jet burst the astronaut can use, Lifeless Planet tends more towards being a walking simulator than a platformer.

It might have been better had it gone that direction everywhere, as Lifeless Planet is at its weakest when it lets itself be openly gamey. Traversing the landscape instantly becomes less interesting when it sets up obvious platforming challenges with pillars or pads to jump across. It becomes more frustrating, too, because these sections accentuate the fiddly and inconsistent jumping mechanics. Puzzles that involve pushing buttons or moving rocks around with a mechanical arm also disappoint, as they boil down to either completely obvious solutions or boring trial-and-error.

In contrast, the planet's more naturalistic traversal challenges were interesting and enjoyable because they generally didn't involve a frustrating reset upon failure. At these moments of exploration, I felt most in tune with the character. They weren't all winners, though—the low legibility of a winding path through a lava field made it my absolute least favorite part of the game.

Unfortunately Lifeless Planet doesn't make exploring as rewarding as it should be. The game offers a lot of nooks and crannies for the player to poke into, but very few actually offer anything interesting. They tend to be empty corners, without any remarkable features at all. The game also has very few collectibles; just a handful of geological samples and scientific notes. These latter are curiously rare, failing to appear even when the player observes something of great scientific interest, such as the first sign of alien life on the planet.

A game premised on the failure of intelligences to understand one another evokes the fiction of Stanislaw Lem. However, Lifeless Planet also draws on the fiction of Clarke, in the majesty of its inscrutable alien monuments and the optimistic point of view that no gulf between worlds is so vast that different societies can't help each other. That gives Lifeless Planet

a conclusion that's very satisfying, even though it preserves much of the ambiguity that drives its mysteries. In light of this, I found the setting and story of Lifeless Planet deeply engrossing, and even in its most frustrating moments I found it tough to turn away. Lifeless Planet is a world well worth exploring. Rating: 8 out of 10


Disclosures: This game was obtained via publisher and reviewed on a home-built Windows 7 PC equipped with an Intel i7 processor, 8 GB RAM, and a single Radeon 6800 HD series graphics card. Approximately 5 hours of play was devoted to single-player modes and the game was completed.

Parents: As of press time this game has not been rated by the ESRB. Lifeless Planet contains a few instances of blood and violence. The principal female character appears to only be wearing underclothes. I feel a reasonably intelligent tween would be able to handle the content.

Deaf & Hard of Hearing: Some of the dialogue is subtitled, but phrases uttered by a Russian character are not, which may cause problems in a section where she is warning the player about otherwise invisible danger spots. There are also warning sounds that are sometimes not accompanied by clear visuals. As such, this game may be harder to complete for hard of hearing individuals. Additionally, the game depends on the soundtrack for much of its emotional impact so it may not be as much fun to play. Colorblind individuals should be aware that in certain parts of the game safe areas are marked with green glow while danger areas are marked with red glow. Again, these segments may be difficult to complete.

Really interesting review; it didn’t sound too positive until the final paragraph. I like walking simulators so I think I’ll pick this up now.

Thanks for the colourblindness warning, very thoughtful.