Well, it does for some 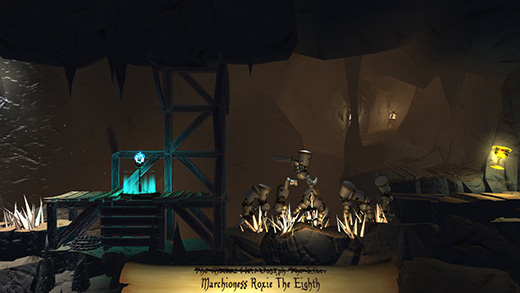 HIGH The momentum puzzle and joke of "Companionship."

LOW Any level where jumping or cannon trajectories interact with gravity fields.

WTF Why can't the knights swing their swords?

A knight gazes at the Holy Grail, almost within his grasp, separated from it by a spike-covered floor which looks too far to jump over. Enticed by his prize, the knight tries anyway. He almost makes it. His failure serves a purpose, though—the lifeless husk of his body creates a safe landing spot for the next knight, who jumps from this grim platform to reach the cup.

Life Goes On is a puzzle game where the player uses the bodies of dead knights to create a path to a treasure. The obstacles include the aforementioned spikes, jets of flame, strange gravity fields, cannons, and streams of cold that freeze knights into blocks of ice. Opening a route to the end means using dead knights to press switches, close circuits, and sometimes just cover up a few spikes.

Several of these traversal puzzles have elegant and pleasing solutions, but it was rare to have any difficulty working them out. The primary challenge in Life Goes On tends to be figuring out how the various switches and traps in the level interact. Once I had experimented a bit to figure out what the different elements did, the solution generally became obvious.

Part of the reason that experimenting with the level is necessary is that the game's physics can be a little weird. Dead knights apparently weigh considerably more than living ones, judging from one of the lever puzzles. The effect of friction on frozen knights seemed unpredictable as well, leading to occasional frustration. As for the gravity fields, they produced a ton of trial-and-error work; it was generally quite difficult to figure out how pre-existing momentum would interact with them.

Life's world also felt inconsistent. The knights, grail, and a monster within the game all seem to be fantasy elements, but the various traps, electrical circuits, and wires all looked very sci-fi to me. The game's environments—cave, mountain, castle—also felt curiously lifeless. While I didn't exactly expect a Trine-like profusion of weird plants and mushrooms, a vine or two would have livened up the otherwise weirdly antiseptic levels.

Life Goes On plays its grim premise mostly for laughs. Although many of the deaths are extremely violent in their nature, there aren't huge gouts of blood shooting off in all directions and viscera everywhere. A little ticker on the bottom of the screen names each knight as he or she appears and then scribbles out the name after the (usually rapid) demise. The little screen following each success has a pithy line and shows the player's expired knights falling into a cart for removal. The levels themselves, however, don't generally have a structural or graphical joke. That's a shame, because the ones that put a sense of humor into the actual game design were some of my favorites.

Life Goes On doesn't take long to finish—I rolled through its 52 levels in a little over 2 hours. Trying to master the puzzles by hitting goals for time and lives lost can extend play, of course, and achievement hunters will find a few additional tasks. In all, though, I felt the game actually understayed its welcome.

The short runtime may be an issue for some, but the essential problem with Life Goes On is its lack of cohesion. Its world never feels coherent on a graphical level, and the behavior of its physics is just slightly too weird to ever feel intuitive. The sense of humor that informs the UI too rarely penetrates to the actual level design. Because of this, and the comparative ease of its puzzles, Life Goes On feels like a trifle, nicely made and modestly amusing but forgotten more quickly than it's finished. Rating: 6 out of 10


Disclosures: This game was obtained via publisher and reviewed on a home-built Windows 7 PC equipped with an Intel i7 processor, 8 GB RAM, and a single Radeon 6800 HD series graphics card. The game was tried with both keyboard and controller. Approximately 5 hours of play was devoted to single-player modes and the game was completed.

Parents: As of press time this game has not been rated by the ESRB. Life Goes On involves a lot of cute little knights dying horribly in order to solve puzzles, but because there is no gore I would classify everything as fantasy violence. There is no suggestive content or drug or alcohol references, and every puzzle can be figured out pretty easily with a little trial-and-error work. Despite the grim concept this might actually be a decent game for kids. I would probably rate it E10.

Deaf & Hard of Hearing: The game has no dialogue and no essential sound cues, so I don't think there will be much of a problem.