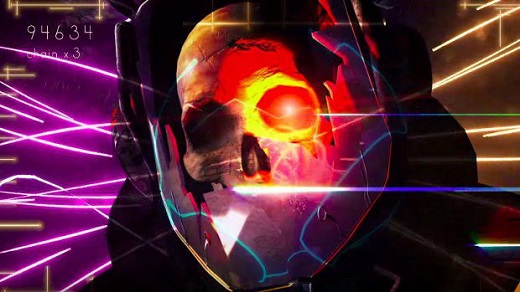 HIGH Traveling through the sea in the second level.

LOW Any time I had to play through the first phase of a level.

WTF So we're physically manifesting giant teddy bears from dead people? This is one strange operation.

It's not often that a game causes me physical pain. Oh sure, something that requires a lot of rapid-fire clicking or constantly holding a trigger a la ModNation Racers may cause my index finger to ache a little. Console action-RPGs like The Witcher or Tales games sometimes do the same to my thumb. Full-on pain across my whole hand, however, is something no game had given me until I played Laserlife, the new rhythm game from BIT.TRIP creators Choice Provisions.

The pain is the fault of the first part of Laserlife's four-phase gameplay.

In every phase of a level, the player controls two streams of light flowing through space. Each is tied to a separate control stick and trigger, so the thumbs have to work independently. This phase is full of glowing "molecules" and the player's job is to make the streams hit those objects and then pull the corresponding trigger in time with the pulsing electronic music so that they can be collected. The need to use both sticks and both triggers constantly necessitated a hand position that resulted, after a short time, in serious pain.

Gathering enough molecules to advance from the first phase of each level can be tough, due to the need to precisely control both streams simultaneously. The handling of the light beams is twitchy and the neutral position is never a spot where the player can hit a molecule to collect it. So, the player has to constantly be minutely steering the streams and paying enough attention to hit (or occasionally hit and hold) the trigger.

The aggravation this causes is compounded by Laserlife's aesthetic choices. The memories the player must unlock are in three groups of four levels, and in each group the first phase of every memory looks identical and has the same boring electronica soundtrack. The layout of "molecules" changes, but the sameness grates.

The most distinctive feature of each level is the second, "memory harmonization" phase. Each of these phases has visuals that reference and complement the memory it's supposed to be representing, and the music in each one is unique. In this phase the player still controls the two streams of light, but the goal is just to hit a series of disc-like "moments" that helpfully light up when the streams are on-target. In some levels the harmonization phase can be quite challenging, but it's never as hard as the first phase. The diversity of environments also makes this the most pleasant part of every level.

After this, things move to the "warp phase", where the light streams plunge down a straight tunnel and the player must dodge various barriers that show up. This isn't particularly difficult but it's also a bore, and these phases have no audio or visual diversity across the entire game. Each level then ends with a quick phase where the player is meant to rotate the thumbsticks as quickly as possible, which doesn't have much to recommend it.

Laserlife keeps track of the player's performance through a score that's essentially meaningless. Missing too many molecules or moments will send the player back to the beginning of a phase, and hitting many of them in sequence will dial up a multiplier to increase the points. Improving score or performance doesn't change the outcome, though. Even when I ran a level perfectly, gathering every molecule, hitting every moment, and dodging every barrier, nothing changed about the object produced or the message that came with it.

Since there is a score, leaderboards exist, but they're terrible. Many of them would not load on PS4, and when they did, I found that my most recent score never registered until I had played another level. Also, the UI in general seems poorly constructed. For instance, I only realized there were multiple difficulties by randomly hitting buttons in a leaderboard, and it took me a while to find that I could only change the difficulty in the options menu, which I had no other reason to visit.

Coming from the same people that brought us the superb Runner 2, Laserlife is a bitter disappointment. The "harmonization" phases have engaging visuals while still offering reasonably challenging gameplay. Unfortunately, those pleasant experiences are flanked by phases that are exasperating and boring, complemented by a slightly wonky leaderboard system. If the harmonization sequences appeared on their own, Laserlife might seem too thin, but I'd be willing to replay it. As it is, Laserlife is a game I'll be fine with forgetting. Rating: 4 out of 10


Disclosures: This game was obtained via publisher and reviewed on the PS4. Approximately 4 hours of play was devoted to single-player modes and the game was completed.

Parents: According to the ESRB, this game contains literally nothing covered by content descriptors. I am quite surprised by this, given the recent overreaches of ESRB reviewers. I was certain that the wine bottle would end up being classed as an alcohol reference or the tandem would be called a sexual reference. Perhaps this is a return to sanity for the ESRB, or perhaps the reviewer simply couldn't write anything down due to hand cramps.

Deaf & Hard of Hearing: It's a rhythm game. Inability to hear the beat will definitely cost hard of hearing players part of their score, especially in the first phase. "Molecules" in that phase are differentiated by color (green, yellow, magenta) and shape, but the color shows up better at a distance so this may be harder for colorblind players.