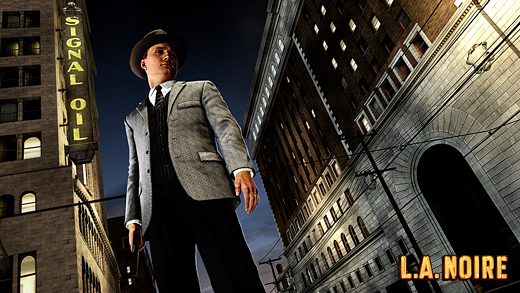 Who is Cole Phelps?

Oh, I can recount the dry facts easily enough: lousy Marine officer who got a Silver Star anyway, good case man for the LAPD, affair with a German junkie, etc. What I'm curious about is the emotional life of the fellow. I spent upwards of twenty hours plodding around a sterile version of L.A. with the guy and I still don't have a clue. He's a lump, as unreadable and impenetrable as a copy of Kant's Kritik der reinen Vernunft written in cuneiform on a lead brick. And we can't even blame it on lousy animation. L.A. Noire's problem is, instead, structural. It exists at the unhappiest place along the spectrum from movie to game, where the developers don't do enough to create characters, and fail to give the players any tools to do it themselves.

Consider the L.A. of Noire: a vast city that is, in gameplay terms, almost totally inert. What can the player do in L.A.? Well, he can cross it, he can yell at it, and he can shoot at it. That's pretty much all. The city is just scenery, a backdrop that cannot come to life except in the prescribed areas that exist behind the special golden handles that say "you can use this door". What the case does not require cannot be done. In the player's hands, Cole Phelps can never relax with friends, or take a walk with his wife and daughters. The social options of Rockstar's Grand Theft Auto IV were often maligned, but at least they made human relationships interestingly playable in an open-world context, an example mysteriously disregarded here. Cole Phelps only exists for the player as Detective Cole Phelps, and that guy isn't a character.

The player can't even define him as a detective. There is no option to be sly, to let a suspect get away with a little lie, knowing that it is only the first loop of the noose. No, L.A. Noire's interrogations are multiple-choice tests where each question has only one correct answer. It's not proceduralized police work, it's a police procedural where the player a 2/3 chance (or better) to flub Phelps' line. When these interrogations fail for apparently illogical reasons, the game is punishing the player for failing to read far enough ahead in the script.

Yet, that script doesn't have any interest in defining Cole Phelps either. In the world of the game he has no friends, and his banter with his police partners is detached, meaningless. His wife appears for a total of one scene, presumably so that the audience can feel the sting of her rejection. Absent any sense that Cole cares about this woman, whom he never once voluntarily discusses, the scene falls flat. 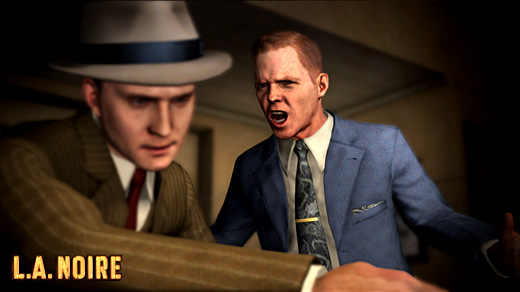 Phelps' conversations with his mistress Elsa, who at least rates a name, consist almost entirely of discussions about cases, and so fare no better. A scene where he stares at Elsa as she sings should be a moment where a married man struggles with his lust for a woman who is not his wife, but absent the contextualizing information, not even the vaunted facial animation technology can make it more emotionally impactful than a shot of one cardboard cutout staring vacantly at another.

Detective Cole Phelps is a robot, wandering around crime scenes and handling their evidence with the precise artificiality of a subroutine breaking an inverse kinematics problem into its component rotations. L.A. Noire is not a triumph of creation, but of replication: apart from the marvelously reproduced faces, almost every animation pops the code into your face, as if the whole world of 1940s L.A. turned into the green sigils of The Matrix. Faces, places, and plots are meticulously reconstructed by the game, but the magnificent fidelity of the reproductions serves only to highlight their inner lifelessness.

Thus it is that the only time in L.A. Noire that one gets to play one of Cole Phelps relationships, it is to adopt the role of the creepy stalker, waiting in the dark to follow his mark home after she leaves work. In the game's dramatically disastrous Homicide Desk, he sent men to jail for less. This scene's only merit is that it allows the detective mechanics to define Cole Phelps, but it still comes across as preposterous. What emotions were so stirred by the sterile interrogation that preceded this moment that they caused Phelps to make the luridly stupid choice to pause the investigation so he could sit in a car from noon until the late night in hopes of following Elsa home? L.A. Noire provides no insight.

L.A. Noire forbids the player to define Cole Phelps, and that wouldn't be such a disaster except that Team Bondi abdicated their responsibility to construct him themselves. In play, there is no Cole Phelps but Detective Cole Phelps, and the gameplay is only about the case. A case, however, is only the starting point of noir fiction, a backbone for a plot that grows from the passions of its principals. Team Bondi seems to know this, and they constructed a narrative that went beyond the bounds of raw police procedural. Yet that story falls flat, because its main character remains blank and unknowable, devoid of passion, a paper shell in a photocopied world.