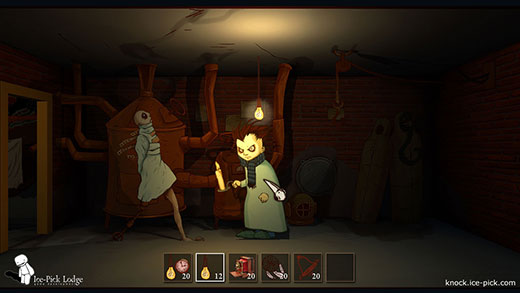 HIGH Figuring out a goofy exploit to avoid the guests.

LOW Phew, managed to hide from those three ghosts, but I'm almost out of time. Let's just go in here and… dang.

WTF Where did this guy get all these lightbulbs?

As a medium, video games face a specific challenge. When players fail in a sequence of gameplay, and especially if they fail repeatedly, they may well give up and leave—a problem rarely faced in narrative forms like literature and film. The best games can immerse the player in their worlds and use that investment to draw the player through obstacles. If that’s not compelling enough, the player may stop engaging the game on its intended level and start playing against it.

This is precisely what happened to me with Knock-Knock.

Knock-Knock presents the travails of a Lodger—improbably clad in nightgown, slippers, and scarf—who is probably not sane. Each night, or possibly in different parts of the same night, he awakens and stumbles around a darkened house made up of randomized 2-D rooms. Exactly what he's doing alternates from episode to episode.

In nightmare sequences, the Lodger is trapped inside his house until sunrise arrives. This might not seem so hard, but spectral "guests" keep showing up and trying to find him. If they do, he either loses most of the progress towards dawn or has to restart the night, depending on how much time has passed. The only way to avoid the guests is to hide or run, but the house's rooms start out empty and the Lodger moves slowly in the darkness. Worse, hiding causes time to run backwards.

Repairing the light in a room allows the Lodger to somehow summon furniture or other objects, a few of which he can hide behind. Occasionally he can even call up a weird clock that advances time more rapidly. However, the light can attract guests, and most guests are invisible when it's on, allowing them to sneak up on the Lodger. As a result there's a strategic balance to what lights to turn on (they are more dangerous in certain parts of the house) and how long to leave them that way.

I found these episodes to be excruciating.

Everything the Lodger does—repairing lights, summoning items, even opening doors—takes forever, seriously limiting the ability to prepare for or flee guests. House layouts and summoning schedules frequently produce absurd difficulty—as in one case where the only door to my starting room led me to an endless hallway that forced me to restart the night. At another point so many guests arrived to a tiny house that I ended up hiding as three of them entered the same room one after another. When I was finally able to move to the next room, having run my time down to just a sliver? Yep, immediately caught by a guest.

The goal here is apparently to create some nail-biting moments while the Lodger tries to dodge ghosts in hopes of the night finally running out, but for me the dominant feeling was irritation.

The ease with which a nightmare can become badly unbalanced against the player—especially considering that many of the rooms have nowhere to hide no matter how much the Lodger summons into them—just made the game feel like it was jerking me around. The irritation was only relieved when I found an exploit that allowed me to skip most of the irritating hiding business. As a bonus, it looked positively ridiculous.

Alternating with these nightmare sequences are calmer ones where the house is not being invaded and time is stopped. In these, the Lodger must find a clock somewhere in the house to start time again, then explore the forest surrounding his home. Out in the woods he will find a ghostly woman, and if he can catch her he will see visions of… something, possibly reality or possibly something else. As the game goes on, these nights will get somewhat more threatening, but they never become as annoying as the hide-and-seek sequences.

The game expands as time goes on, with weirder and more dangerous ghosts and an apparent sanity mechanic that can lead to a game over. There are hints at an even darker and stranger story than the one that appears on the surface. None of this really grabbed me, though—the story the game was telling wasn't enough to pull me over the barrier that its irritating mechanics had created.

This comes down, in part, to a failure of the art, even though it's well-drawn. The Lodger is insistent on protecting his house and seems very concerned about it, but most of its rooms are alternately bare or decrepit. It didn't seem like a place worth protecting, or even staying in. I couldn't see what the protagonist saw in this place or what his attachment to this house was, and since Knock-Knock seems to be about his drive to stay in it and keep others out, the game's essence was lost to me.

Randomization also hurts Knock-Knock. It's an excellent way to generate variability, but it can also produce game-killing spikes in difficulty. The game's third nightmare was the most difficult sequence I played up until almost the very end of the game, and if it hadn't been so hard, I might have had a very different reaction to what was going on. As with Receiver, the costs of randomization may have been greater than the benefits.

Knock-Knock could have been amazing; with a slightly different outcome on that early night, and if the mystery gets its hooks in before the mechanics start souring the experience, it could have been a tense nail-biter. As it happened, I got fed up with Knock-Knock long before its secrets surfaced, and I was happier to break the game than to continue playing along. Rating: 3 out of 10


Disclosures: This game was obtained via publisher and reviewed on a home built Windows 7 PC equipped with an Intel i7 processor, 8 GB RAM, and a single Radeon 6800 HD-series graphics card. Approximately 5 hours of play was devoted to single-player modes and the game was completed.

Parents: As of press time this game has not been rated by the ESRB. Although it's creepy, Knock-Knock does not contain any overtly violent or gory content. Young children might find it too disturbing or frustrating, but aside from that this is a scary game that pretty much all ages can play.

Deaf & Hard of Hearing: When the Lodger breaks the fourth wall, what he says is subtitled. However, the various guests also say things or make noises that can be extremely helpful in figuring where enemies are, what to do in a given room, and what the situation elsewhere in the house is. None of this comes with subtitles or visual adjuncts. Consequently this game will be much more difficult for hard-of-hearing individuals.