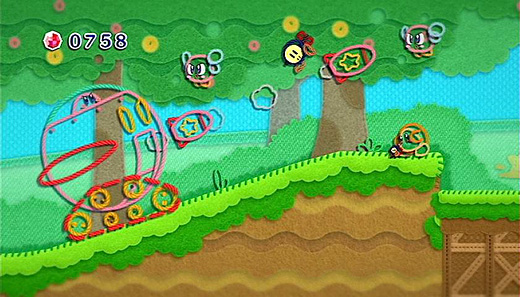 The most difficult part of reviewing a game is reviewing the difficulty. A few games—Super Meat Boy, I Wanna be the Guy—can uncontroversially be called hard, but the essential question is actually whether they are too hard. Since that level of difficulty depends not only on the individual player's skills and experience, but also on his values, it can be difficult to state what goes over the line. It is even harder to accurately say whether a game is too easy, primarily because most reviewers are skilled and experienced gamers, many of them drawn to the hobby during its early days when challenge was practically all a game could offer in terms of fun. "Too easy" often equates to boring, perhaps to the detriment of games like Soul Bubbles. I have seen the "too easy" charge leveled at two games I played recently, Kirby's Epic Yarn and de Blob 2. In both cases, the statement is wrong, but for very different reasons.

In discussing where "______ is too easy" is wrong, it's useful to make a distinction between two kinds of play. The first is skillful play, which reflects a system of values wherein mental and physical mastery of a game's mechanics are rewarded. Super Meat Boy is a game of skillful play, as are gō and basketball. Free play reflects a system of values in which mastery is irrelevant, and rules exist primarily to give a modest structure to experiential activities. Coloring books are a kind of free play, and one can legitimately apply this name to games (specifically role-playing games such as Amber) that exist to enable cooperative storytelling (as such, Sleep is Death is also an obvious example). Video games involve both kinds of play, sometimes simultaneously, a point best emphasized by games with an open-world structure that are often as much about experiencing a virtual space as they are about succeeding at various challenges located within.

I start with this distinction because each of these games is judged "too easy" using the wrong standard of play. Epic Yarn seems too easy to many people because progressing through the game's story is practically assured regardless of skill level. Kirby can't die or fail a stage no matter how inept a player is; as long as he is sufficiently stubborn he will eventually win the game. In this analysis, the standard of difficulty is assessed using an experiential value, i.e. seeing the story through to the end. I feel this is the wrong approach to use, because Epic Yarn isn't really about its flimsy story. To me, it seems that Epic Yarn is about beads. 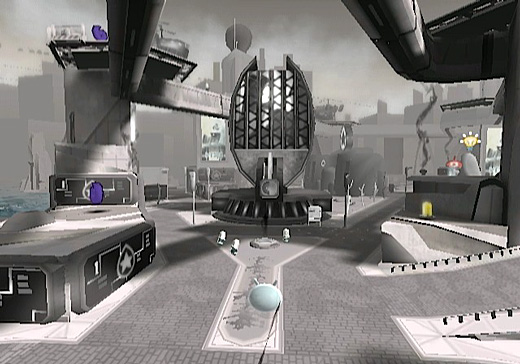 The beads in Epic Yarn serve almost exclusively as a measure of player mastery. A few levels and other extras are unlocked with them, but they're primarily an indicator of a player's skill. Failing a jump or being attacked by an enemy causes Kirby to lose the beads the player painstakingly collects in each level. This is reminiscent of the Sonic games, with the difference that unlike Sonic and his rings, if Kirby loses all his beads he just keeps going rather than losing a life. After the first few levels, getting through a zone with the maximum number of beads starts to get tough, in some places extremely so. Anyone can bull his way through the game, but achieving the best score requires very skillful play.

Of course, this subverts certain expectations. The traditional structure of video games focused on skillful play uses content as the reward, and Epic Yarn obviously eschewed that approach. There's no need for recourse to the many-worlds interpretation of quantum theory to explain why players acclimated to the existing system reacted with confusion. The experiential standard ("Did I see the whole story?") is intentionally misleading. Using it, Kirby's Epic Yarn appears to be easy, perhaps even too easy, even though it is actually quite difficult. This is one strategy for appealing to multiple kinds of gamers, provided they recognize what they're getting.

This problem gets inverted when it comes to de Blob 2. Some superficial features of the game—the timer, obviously, but also the possibility that Blob can die—suggest that it follows the traditional habit of valuing skillful play. This, however, is misleading because de Blob 2 is really about free play. This follows not only from the game's overt theme of individuality, but also from the fact that it is essentially a three-dimensional coloring book. While Blob is occasionally tasked to paint certain objects specific colors, the primary activity is to roll through the levels, slapping whatever paint you like on everything you can see. While one might object to aesthetics of that idea, the charge that the game is too easy is vacuous, as nonsensical as complaining that "Für Elise" has too few notes. It's simply not about skillful play, and the more deserved criticism is that de Blob 2 isn't clear (or confident) enough about what kind of game it is.

One major problem of assessing a game's difficulty lies in understanding what values lie at the core of the experience. This can be tough because video games tend to blend skillful play with free play, to different degrees. Traditionally, experiential aspects have been presented as rewards for skillful play. The expectation that Kirby's Epic Yarn would adhere to this convention misled many people into thinking that it was too easy, even as the game offered mechanics that recognized and rewarded skilled players. At the same time, this error seems to have befallen the developers of de Blob 2, whose use of traditional design elements interferes with the game's expressiveness and freedom of play. Legitimate complaints about difficulty, too hard or too easy, must be grounded in an understanding of what a game's mechanics tell us about what it is trying to achieve.

I view “this game is too easy” as a position statement. A statement about the gamer, not the game. They are either bragging about themselves or insulting someone else. And complaining that “Kirby” is too easy… that simply boggles my mind. Are they saying that kirby is no longer the hardcore experience that it used to be? ” Epic Yarn seems too easy to many people because progressing through the game’s story is practically assured regardless of skill level. ” I endorse this approach for most video games. Let everyone play the whole game, start to finish. Let people who… Read more »

I felt that the complaints about Prince of Persia‘s difficulty were misplaced. In that case, I thought that the ease of the platforming worked as gameplay-as-characterization. The lack of difficulty was not irrelevant, per se, but the simplistic platforming of that game struck me as a way of inspiring a feeling of freedom and (over)confidence in the player that matches the emotions of the Prince.

A very interesting, perceptive analysis of gaming difficulty and how we must bear in mind the type of experience a game is actually attempting to provide. (I think the defense of Kirby could be applied to many games in which the real challenges are not in completing levels but in completing them perfectly). I’m wondering how Sparky might apply this to the 2008 version of Prince of Persia, which was also often criticized for being too easy but which I greatly enjoyed. I suppose one could compare collecting all of the seeds in Prince to doing well enough in levels… Read more »