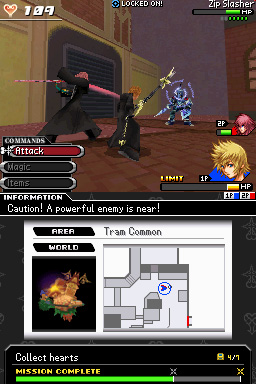 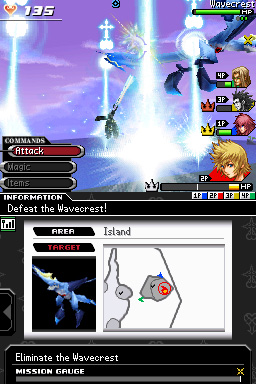 Pity the author of the midquel. Sequels and prequels have strengths and weaknesses, but slotting a new story in between two established and popular tales has nothing but pitfalls. The writer cannot play around with the beginning, he cannot change the ending, and nothing that happens in between can contradict what precedes or follows. Facing such constraints, unable to change the characters or the course they are on, the midquel writer is often forced to neuter his effort in some way. Sometimes an involved story happens, but it turns out it was all a dream. Sometimes nothing happens at all, and that is the fate that befalls Kingdom Hearts 358/2 Days.

358/2 Days is an action role-playing game that aims to tell the story of Roxas, Sora's Nobody, and his time working with Organization XIII during the year between the two flagship Kingdom Hearts games. If you did not understand that sentence, the plot of this game will be incomprehensible to you, which is a kinder fate than what awaits actual fans of the series, who know enough of the story to be disappointed by the game's absence of revelations. In telling its two stories, that of Organization XIII's plot and that of Roxas and Axel's friendship, the game manages to not generate a lick of insight into either. In the case of Organization XIII that's no great loss, as the intrinsic mythology of Kingdom Hearts has always been a bunch of ad hoc nonsense anyway. The great lost opportunity here lies with the story of Axel and Roxas.

Kingdom Hearts II implied that these two had a deep, important connection, but 358/2 Days does nothing to explain why Roxas mattered so greatly to Axel. Instead, we are presented with what appears to be nothing more than an ordinary friendship, with the added wrinkle that there is a girl involved: Xion, the fourteenth member (sigh) of Organization XIII. As a Nobody, Roxas is incapable of feeling actual emotion, so his choice to befriend Axel and Xion may be mere mimesis of Sora's relationship with Riku and Kairi, but this possibility, like every possible interesting angle of the game's story, remains unexplored. Moreover, like any normal pair of friends, Axel and Roxas develop their relationship through habitual contact. This means the player is treated to a number of very similar scenes of the two of them (sometimes with Xion) sitting atop a tower eating ice cream, which isn't as interesting as it sounds the first time it happens. 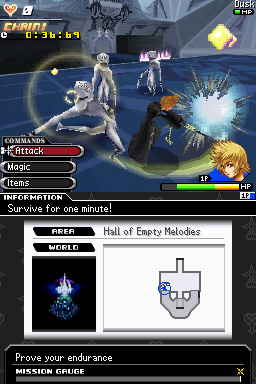 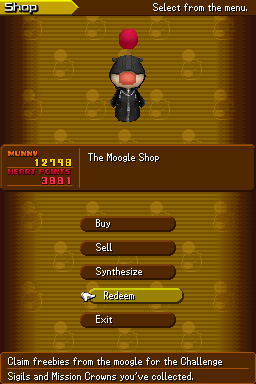 The few Disney worlds Roxas gets a chance to explore add hardly anything to the story either. The flagship games in the series overcome the limited interactivity of these settings by using characters and storylines that connect metaphorically with Sora and his adventures. Here, however, Roxas is specifically enjoined against interacting with the inhabitants of the worlds, and he obeys. What little story each world has, rather than being presented in a single continuous dose, gets scattered madly across the game's 93 missions. Absent continuity or compelling characters, the vast blankness of these locations becomes painfully obvious. The Disney worlds are reduced from evocative locales to empty spaces where Roxas kills Heartless.

Roxas kills a lot of Heartless, too, using an action battle system that's almost a straight port of the system from Kingdom Hearts, except that there are fewer special moves that are under the player's control. Although the higher difficulty settings require the player to master blocking and dodging, old-fashioned button-mashing will suffice on easy. Because there's so much combat in so few constantly-revisited spaces, however, the fighting feels more repetitive than it did in the earlier games.

The original game's wonky camera seems to have been ported, too, and because the game's spaces have such great verticality it's often not particularly helpful. A lock-on system helps (when it manages to lock on to the right enemy), but when Roxas is facing large enemies, or a large number of them, the action can become extremely hard to follow. This is a pity, because although the game has more than its share of palette-swapping, the bosses continue the series' trend of elaborate and beautiful enemy designs.

The game's largest innovation comes from its character development approach, called the panel system. Using the panels, the player "equips" not just weapons, armor, and items, but also spells, skills, and even levels. This introduces an interesting set of trade-offs, particularly early on in the game when equipping more spells might require the player to use a weaker blade or fewer levels. Late in the game it becomes a way to tune the difficulty for the player who desires a challenge. Unfortunately, by that point the player will likely have so many slots available for equipping the panels that the trade-offs no longer exist. Like everything else, the panel system stops being interesting long before the game stumbles to its inevitable conclusion.

Kingdom Hearts 358/2 Days finds the unhappiest of mediums: it is a game for nobody. Series newcomers may find the combat satisfying and enjoy the potential of the panel system, but the game is so steeped in Kingdom Hearts lore that the story will come across as gibberish. Fans will appreciate seeing favorite characters again, but the combat compares unfavorably to the PlayStation 2 games and the story never really goes beyond rehashing things they already knew. What little the game does add to the saga is forgotten by everyone at the end. Disney fans will be most disappointed of all: Disney's characters barely put in an appearance, and Disney's worlds are just window-dressing for a killzone. Kingdom Hearts aficionados would do better to wait for the upcoming Birth By Sleep for the PlayStation Portable. At least that, as a prequel, might not be so afraid of treading on canon that it freezes itself out of telling any story at all. Rating: 4.0 out of 10.

Disclosures: This game was obtained via retail store and reviewed on the DS Lite. Approximately 34 hours of play was devoted to single-player modes (completed 1 times) and 0 hours of play in multiplayer modes.

Parents: According to the ESRB, this game contains fantasy violence. There is no sexual content or even light romance: this game is as wholesome and piquant as a lukewarm bowl of shredded wheat.

Deaf & Hard of Hearing: Sound is optional, and all voiced cut-scenes have subtitles.

That’s an interesting interpretation, and if the inevitable sequel ever gets around to actually explaining what’s up with Roxas I imagine that the story will go much like what you’ve written. Still, there’s nothing in the canon of the series, such as it is, that directly supports your idea. There’s no point to pretending that people who disagree with you do so just because they weren’t paying attention. The characters in the game who supposedly know something about Nobodies all explicitly and repeatedly deny that it is in any way possible for them to have a heart or emotions. Now,… Read more »

Whenever I see people decrying emotions shown by Nobodies, namely Naminé, Roxas, Axel, and Xion, I wonder if they really picked up on aspects of the story. === SPOILERS FOR CHAIN OF MEMORIES === Naminé was made from Kairi’s heart leaving Sora’s body. === SPOILERS FOR 358/2 DAYS === Xion’s ‘personage’ is based on Sora’s memories of Kairi. === GENERAL SPOILERS FOR KINGDOM HEARTS === As such, those two and Roxas have a connection to Sora’s heart, which unlike other Nobodies’ is not steeped in the darkness of the Heartless nor freed into Kingdom Hearts itself. Since Sora is still… Read more »

I always thought it was clear by the time that GBA Kingdom Hearts came out (the name escapes me now) that Square had no intention of ever making sense out of the story. Kingdom Hearts seems the Lost philosophy of storytelling, where new wrinkles and complications are constantly introduced, but few are ever resolved as an effort to lock an audience in. I mean, with this heartless/nobody nonsense there’s like 15 duplicates of every primary character, which of course all look different in their own stylish anime way. SPOILER FOR KINGDOM HEARTS 2 I remember me and my brother laughing… Read more »

What rescued Kingdom Hearts II for me, even though it didn’t have much character development, were some great character moments. I mean, the reunion scene is kind of infamous, but there were some other scenes that at least let the characters show off who they were in compelling ways, even if that wasn’t evolving. And the local characters had something going on, even if the main story characters didn’t. 358/2 Days hasn’t got anything interesting to say about anyone, period.

Your narrative criticism sounds a lot like my feelings about KH2’s story. No real development on anyone’s part, and just a bunch of brooding assholes for villains.