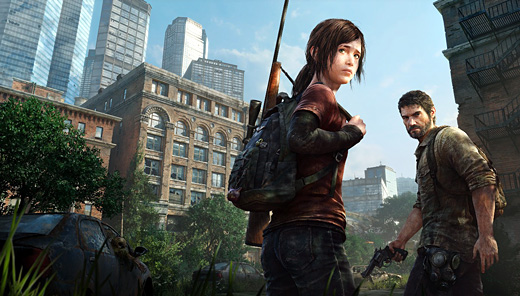 I don't really hate anything intrinsic to the pendants, of course. They're much too boring for that. In the context of The Last of Us, however, they represent a depressing victory of metagame social bullshit over the interests of simulation and world-building. They're a bunch of crap tossed into a game in order to justify a trophy, adding no kind of value whatever to an experience they functionally degrade.

Naughty Dog's previous games had collectibles too, of course. The Uncharted series is loaded with little archaeological goodies, glints on the ground that Drake can pick up for dubious ends. Those treasures, however, tend to be visually interesting and unique, and they usually had some historical relationship to the setting where they were found. Not so the Firefly pendants, which are just dog tags that all pretty much look the same. The Firefly pendants don't offer any kind of intrinsic reward because there's not really anything there worth looking at. My understanding is that the names on the tags represent winners of a fan-art contest. If grabbing a tag allowed the player to see the winning pieces in the bonuses menu, that would at least make each one interesting to grab, even if not in the game.

Within the game, the Firefly pendants don't do anything to create the story of the world or expand the player's experience of it. Most of the pendants are a bit off the beaten path, but the places the player goes in order to get them don't have anything special going on. One would at least expect to find the pendants in close proximity to a body, or some sign of conflict, given that they are dog tags. As it happens, though, this is never the case. The pendants are strewn through the world, seemingly at random, never giving any insight as to how they came to be in a place or why that place or their presence particularly matters. In contrast, the random notes and such that Joel grabs during his quest, while perhaps having no utility for him, at least flesh out the story of the world for the player.

To this one must add that the act of collecting the pendants at best fails to fit into the world and at worst actively damages the world-building. It's clear that the pendants represent the presence and (faded) influence of the Fireflies. But why is Joel collecting these things? When Drake grabs a glinting bit of treasure off the ground, it fits his archaeological background and personal greed perfectly. After all, he has to be financing his enormous medical expenses somehow. There's no explanation why Joel should be bothering with the pendants, however. They don't provide any useful resource and there's no story behind the task. To the best of my recollection their presence is never remarked upon by anyone, not even Joel! So why would Joel grab this tag, rather than some random scrap of paper or a bottle cap? Why would he carry the pendants around, when he could use that space to stuff another sliver of glass or scrap of cloth into his overstuffed backpack?

This becomes an even more difficult pill to swallow when Joel encounters pendants that are hanging from something, usually a tree branch. In these cases, Joel has to shoot the pendant down, which not only wastes a precious bullet, but also produces a noise likely to draw one of the many cordyceps infection victims. As you might recall, many of them have excellent hearing. In the context of the game world, spending a bullet to gain a useless pendant is something that Joel would never do. In order to engage with the collection system, then, the player has to break character, which is definitely the wrong way to go about constructing an engaging cinematic experience.

The Firefly tags exist only to be collected, not to develop a story or assist the character collecting them. There's nothing wrong per se with a collectible that exists only to be gathered—entire games have been built on such. In the context of a story-driven game, however, especially one intended to be realistic and emotionally gripping, there needs to be something driving collection. That's absent from The Last of Us, but at least we can get a cool trophy.

Couldn’t agree more. Naughty Dog goes to great lengths to make the game feel atmospheric; to make you feel tense, on-edge, and fully absorbed in the experience. Having to throw a brick at a lamppost to collect a completely pointless dog-tag breaks that atmosphere immediately. I was assuming that, after collecting the first few, the pendants would be revealed to have some value. After finishing the game, though, any potential value has gone (narrative or otherwise). They’re useless, and Joel – being the man he is – would really not care about such things. At least with the comic books… Read more »

When I went through the game, the human enemies did not drop nearly as much ammunition as zombies which struck me as somewhat arbitrary. I do disagree with the convenient drops however but that same point is mitigated by the fact that fights usually end with a post-scavenging period which has many of the items you’ve used up. Sadly Errant Signal and Tom Chick have said it best, perfunctory mechanics that undermine a fantastic story and unforgettable characters.