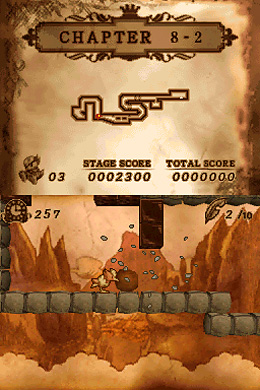 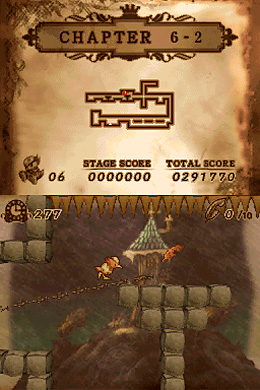 HIGH When you get going in a level.

LOW Fighting through the massive difficulty spike in the last third of the game.

WTF Why isn't the lovely storybook art part of the levels?

Ivy is a strange little bird hatched from an polka-dotted egg that fell out of the sky. Since she hasn't fully escaped her shell, she can't fly. So, off she runs, looking for her mother. In Ivy the Kiwi?

, it's up to the player to guide her to this destination. It's a promising setup that never delivers.

Ivy is pretty upset and running blind, so the player can't control her directly. Instead, Ivy must be guided through the level and protected from traps by drawing vines. These can be used as a platform for her to run across, as walls to stop her, as levers to scoop her up to a new position, or even as slingshots to launch her through breakable blocks. Although it's sometimes a bit too difficult to figure out what a particular vine will do, particularly when it comes to stopping on a slope or squeezing through a tight spot, this limited set of actions allows for a fair bit of variety. When things are going well, helping Ivy barrel through a level can be a great rush.

In his review of the DS version of this game, Brad noted that he had trouble seeing the levels because of their poor color differentiation. Although the palette in each chapter tended to be pretty limited, using a Wii (with a run-of-the-mill HDTV) I had no trouble seeing what I was doing. This brought me little joy, because although the game has a lovely storybook aesthetic in many places, this does not extend to the levels, which are all constructed of blocks. Running through a town or a castle, this didn't seem so out of place, but the meadows, forests, and even a zone where you are running through the sky are all just constructed of blocks, too. The visual concepts of the levels are every bit as drab as their sepia-toned palette.

Ivy's progress through the various regions is explained by a pleasant little picture book, but this text only shows up at the very beginning and very end of the game. As the game is in progress, there's no explanation of what's driving Ivy through these locations or what's happening to her there. All you have is this little bird in an eggshell stumbling through level after blocky level. At the end, the game asks the player to find all the feathers hidden in the storybook pictures, but it doesn't include any mechanics for actually pointing them out. The storybook and the game had very little to do with one another, though they could have been a great combination.

All this talk of a cute little bird in a storybook looking for her mother might make Ivy the Kiwi? sound like a kids' game, and the early levels do little to dispel this impression. They're relatively easy to navigate and guiding Ivy through them is more fun than challenging. The difficulty ramps up fairly gently from there until the last third of the game, where it hits a massive difficulty spike, in part due to the inclusion of an obstacle that in most cases can only be avoided through good timing. Since Ivy isn't under the player's direct control, timing anything is pretty tough. The last few chapters can easily become very frustrating, all the more so because what came before was so easy.

The uneven difficulty progression is exacerbated by the absence of a level map. On the DS Brad found the map difficult to use, but at least he could find it. On the Wii no map is available at all, and the only glimpse of a level's overall structure is a brief sweep from the goal point to the starting point, which usually does not encompass all (or even most) of the path. In fairness, most of the levels are simple enough that navigational information isn't really needed, especially early on. However, because so little of the level is visible at a time it's quite easy to miss the way to the end, or to accidentally send Ivy flying into some spikes just off the edge of the screen.

Ivy the Kiwi? feels like the extremely rough first draft of a pretty good idea. The core mechanics are pleasant, but they're undercut by the nonexistent navigation tools and the jagged difficulty curve. The storybook motif is charming, but it's not really acknowledged by either the game's structure or its frankly disastrous art direction. The main character is a cute draw for kids, but the game is not balanced for them. Ivy the Kiwi?

could have been a charming game with an interesting and fun concept, but Prope did almost none of the things that might have made that happen. Rating: 3.5 out of 10.

Shop Ivy the Kiwi? at Bizrate

Disclosures: This game was obtained via retail store and reviewed on the Wii. Approximately 5 hours of play was devoted to finishing the game once.