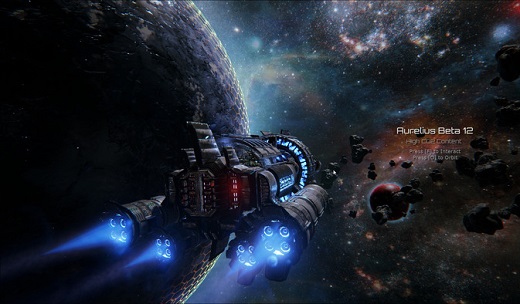 WTF Wait, so the human race is escaping evil aliens by moving to a planet in an area heavily patrolled by them?

The setup of Into the Stars will likely seem familiar: the player commands a starship in a sector of deep space and must travel from planet to planet, gathering resources to survive an odyssey to an important destination, with the specter of permadeath lingering in every orbit.

This is, broadly, the same premise as FTL and Out There, a pair of games that managed to build compelling space adventures using only two dimensions. Into the Stars brings a third to the table with some gorgeous Unreal engine work, but unfortunately little else.

The conceit of the game is that humanity, having been plagued by regular attacks from a hostile alien species, has decided to send a small contingent of people to found a new colony with the player as their Aeneas. Curiously, the space around this destination planet is thickly patrolled by those same hostile aliens, calling the mission's likelihood of success into question.

One natural outcome of the presence of these aliens is combat, although Into the Stars offers difficulty levels where fighting can easily be avoided. I'd recommend doing that, because I didn't enjoy the combat system.

Battling is fine one-on-one. To defeat an enemy, the player needs to recognize the color of the other ship's shields and tune their weapons to a different one, while tuning their own shields to be the same color as the enemy's charged weapon. As there are three colors available, however, it should be obvious that encountering two enemies at once with different colors will leave the player open to serious damage, and facing three simultaneously will almost invariably be fatal.

Did I get attacked by packs of three enemies during my trip on normal difficulty? I certainly did.

Combat is only part of what a player needs to juggle, however. The player's ship has a complement of 10,000 colonists who must be kept alive, and there's also a finite set of resources to manage.

To deal with the former, Into the Stars provides a light city-management screen. To handle the latter, there's a lot of interacting with planets and alien races. Bumping into a friendly ship affords the opportunity for resource trading. Planets, on the other hand, let the player spend resources to gather them, either by trying to explore the surface or using a mining rig in a minigame to dig up elements needed to keep the ship running.

Lazy conceptualization lessened my enjoyment of the game when it came to resource gathering. By default, each major system of the ship uses a different fuel, and some of those choices seemed foolish. At one point I faced a crisis in which my oxygen generator was in danger of shutting down because I had run out of carbon dioxide, a substance every single one of my colonists was constantly emitting. Similarly, one can face a shortage of "biomass", which colonists should be producing on a less frequent, though hopefully still regular, basis.

This seems like such a small thing, but a strategy game demands thoughtful play. Once I'm thinking, it becomes hard to ignore obvious foolishness like this. After my first "low CO2" crisis I couldn't look at the resource panel without feeling a twinge of annoyance.

The construction of the game's space is similarly silly. Planets appear here and there within it, but not in the context of any recognizable solar system. It's not unusual to see a planet that doesn't have a star around at all, while the stars that one can find are frequently smaller than the planets. This is just as well, because if stars were appropriately scaled for planets and ship, they would completely fill the intervening space.

Unfortunately, the player actually has to fly across that intervening space, and crossing empty space is boring. There's an effort to spice up the journeys with random events and a meter that dials up the danger the longer the ship stays in a given region of space, but they're not enough to correct the fundamental dullness. The result is that even though a successful run will be short, it still feels tedious and padded. If Into the Stars is good for anything, it's demonstrating that FTL and Out There made the better choice by skipping over all that travel time in favor of dense incidents.

In fact, overall comparison to those two games makes the deficiencies of Into the Stars all too obvious. It's prettier than either of them, but its decisions never feel as fraught, its combat is never as interesting, and its ideas are never as original, not to mention that its simulation of spaceflight and representation of space itself is tedious nonsense. A lovely face paired with an empty head is a cliché, but I'm not going to waste a better metaphor on a game this dull. Rating: 3.5 out of 10

Disclosures: This game was obtained via publisher and reviewed on a home-built Windows 10 PC equipped with an Intel i7 processor, 8 GB RAM, and a single Radeon R9 270X graphics card. I found the game to have some instability when alt-tabbing. Approximately 4 hours of play was devoted to single-player modes and the game was completed.

Parents: While the Steam Store reports a rating of E, I could not find information about the game on the ESRB website. Into the Stars doesn't contain any content that seems directly objectionable, although the concepts behind certain upgrades (breeding centers) and alien interactions (trading people) might trouble some parents or children.

Deaf & Hard of Hearing: The game doesn't have dialogue per se and most of the information conveyed by audio alerts does have an on-screen text counterpart. However, when I played with sound off, I found I often missed the text alerts.

Colorblind Modes: Into the Stars does not have a colorblind mode and I do not recommend it for colorblind players. Combat is a process of matching or mismatching colors. Additionally, the (essential) mining minigame uses a faint red color to indicate blocks of rock that will damage the drill. Dangerous sectors of space are indicated by yellow markings, and friendly and hostile ships are distinguished at long range solely by tiny green or red indicators.