Adrift in the Sea of Stars 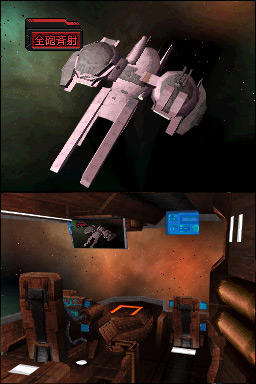 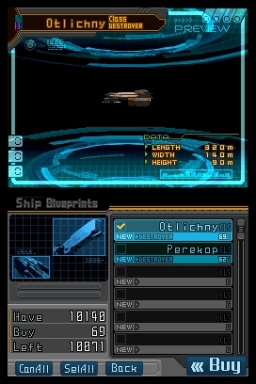 HIGH Defeating the third wave of a superior enemy fleet with just a sliver of life left on my flagship.

LOW Getting lost for six hours in Chapter Two.

WTF The acronym for fame points is FAP.

The famous opening of Star Trek calls space "the final frontier", which sounds less impressive when you realize that at one point St. Louis was the final frontier. This being the case, it stands to reason that after space got through being a frontier it would become a place like any other, full of countries and cities and a sea of individuals, each striving to ruin it all for everyone else. This is the universe envisioned by Infinite Space: one in which people went to the stars without becoming any more enlightened, noble, or sensible than they are now.

Into this world comes Yuri, a young man who has decided to become a space adventurer, commanding a fleet of up to five ships as he travels the stars in search of fame, fortune, and perhaps revenge. To traverse the heavens, human beings are using ancient artifacts of uncertain provenance; as in most science fiction, this will not turn out well. Until the bill comes due, however, Yuri needs to assemble his ships, customize them with additional modules, gather a crew to staff them, and try to fix the messes caused by the corruption and incompetence of the galaxy's rulers.

Infinite Space belongs to the nautical tradition of space opera, in which tomorrow's wars in space much resemble yesterday's wars at sea. Despite this, the battles are simplified to remove the science of maneuver, and take place on a linear field. By moving forward and backward the player can partially control his range to the enemy, a factor that determines the availability and accuracy of his weapons. The player's ability to take actions related to attack or defense is controlled by a constantly-replenishing action gauge, and strategically his three main choices have a rough rock-paper-scissors relationship. The melee battles use a similar approach, but without the factor of range this system feels perfunctory and dull—every ground combat sequence in the game is a profound waste of time.

The space battles are additionally spiced up by the use of small fighters, although these tend to unbalance the game. In large numbers, fighters cause damage equivalent to very strong weapons, with the added benefit that they freeze the enemy ships in place, putting range entirely in the hands of the player. The most effective fighters in the game are available relatively early, making random battles far too easy in the game's late stages.

This is not to say that it's actually easy to advance, because Infinite Space tirelessly conceals the interactions that move the story forward. In its second chapter, for instance, one can only progress by fighting a particular pirate, which causes an officer of the local forces to invite you to his base. However, the officer will only actually appear at the base if the player goes to a different planet and talks to the proprietor of the tavern twice, so that she will introduce Yuri to a girl he must talk to three times, so she will come with him. Until Yuri has spoken to the girl all three times, there is no reason to suspect that she and the officer have any connection whatsoever. 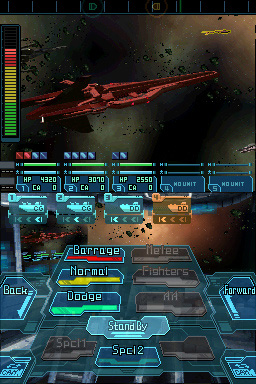 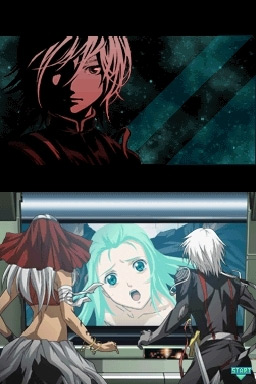 While this chain of interactions is particularly complex and inscrutable, the game regularly requires its player to hunt for the right location or character who will advance the story, often with very little or no direction as to what person or locale will solve the problem. Important information about the mechanics is similarly buried in the game's extensive but awkwardly-constructed help menu, or even simply unavailable. The only way to find out how much module space a given ship has available, for example, is to buy it and count the blocks yourself.

Infinite Space is also harsh. The difficulty progression is uneven, and it is not uncommon to effortlessly smash through a number of easy battles in an area before slamming into a brickwall of a boss or an arbitrary death. The frustration is exacerbated by the fact that boss battles are often far away from save points (although save points are unusually plentiful for a Japanese role-playing game), and even farther from the spots where ships can be built or upgraded. Buying that shiny new ship will require plenty of grinding for cash, as the rewards from random battles tend to be paltry in comparison to shipyard expenses.

Having read the above, it may surprise you to learn that I do not hate this game. For all its irritations, the process of buying and customizing ships has a certain charm. For all their simplicity, the space battles involve just enough strategic depth to remain fresh throughout the game. And for all their difficulty, the boss fights always end with a shout of joy rather than a sigh of released frustration. As much as it tries not to be, the gameplay in Infinite Space is engaging.

There is something else, too. At one point, Yuri encounters an old friend who has switched sides to join the game's "evil empire", explaining his choice by pointing out that the empire, though oppressive, at least ensures security from pirates and freedom from want. In any number of contemporary anime or games, this would be an occasion for the aggrieved hero to embark on a long diatribe about the friend's foolishness and the importance of their unbreakable bonds (dattebayo!). Yuri, however, remembers that he spent the first chapters of the game in conflict with corrupt governments and the pirates they enabled. He calmly accepts his old friend's reasoning and agrees to disagree.

Although Yuri begins the game as an impulsive and somewhat effeminate hero, he becomes a strong man who is intelligent and pragmatic. He is an adult, starring in a story that is surprisingly mature. For all the space opera battles, Infinite Space's real story is about the political machinations of men who see a catastrophe as an opportunity for personal or national gain. Yuri uses and is used by these men, and except for a brief, early period, Infinite Space does not give us the comfort of believing he is unaware of it.

This is not to say that Infinite Space is devoid of absurd sentiment or bad writing. Some of the early villains are ludicrous mustache-twirlers; the plot loses coherence in its final act, as the focus shifts to the nigh-omnipotent alien Overlords. This game cannot be compared favorably with its most obvious influences—Clarke's Space Odyssey books and Pohl's Gateway saga. All the same, it's refreshing to experience an RPG story that for the most part treats me like an adult. Infinite Space handles its enormous cast deftly, and in the second half of the game, particularly, the main characters become intriguing enough to excuse the story's excesses.

If finding that story had been significantly easier than defeating the main bosses, I would praise this game without reservation. As it is, I can only recommend it to those who have the patience and tolerance to work through significant frustration for the reward of a satisfying story about interesting people. Rating: 7.5 out of 10.

Disclosures: This game was obtained via retail store and reviewed on the DS Lite. Approximately 50 hours of play was devoted to single-player modes (completed 1 times) and 0 hours of play in multiplayer modes.

Parents: According to the ESRB, this game contains alcohol references, fantasy violence, mild blood, mild language, and mild suggestive themes. The characters drink regularly, on at least one occasion becoming so intoxicated they pass out. An incestuous relationship is implied between two characters. The sexual assault of several characters is implied.

Deaf & Hard of Hearing: No unique information is conveyed by the audio and there is no voice acting except in an introductory anime-style video. Colorblind players may have additional difficulty in combat because the enemy's readiness level is conveyed by a narrow outline that changes color from green to yellow to red.

As I mentioned, the battles are fairly simple affairs. Their challenge comes from subtlety, not complexity. The arena is linear, and you have probably only 5 or 6 possible actions at any time. Your choice of action will depend on your position, your readiness, and the enemy’s readiness — a relatively simple calculation in most cases. The really complex stuff comes outside of battle, as you try to squeeze more modules into your ship and optimize your crew and their special abilities. EDIT: I should clarify that you don’t control all five ships independently. Your fleet moves and attacks as… Read more »

I’m intrigued, just a bit put off due to the “tolerance to work through significant frustration”-part. I have two questions about the game:
* How does the complexity of space battles compare to battles in games like Master of Orion 1 & 2?
* How often do this pointless ground combat sequences show up? Are they a regular annoyance or rather scarce?