The Paint Washes Off 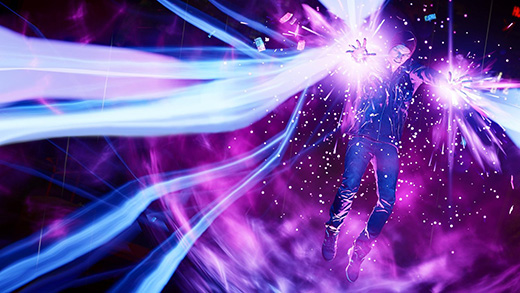 HIGH Crossing the city by gliding and jumping through satellite dishes without ever touching the ground.

WTF The feds let Augustine destroy all these bridges? Do they have any idea how much a bridge costs?

The selling point of a new console generation always seems to be graphics, and the current transition to the PS4 and XBox One has been no different—every comparison of the most recent boxes hinges on polygons, pixels, and framerates.

To some extent this is fair since these are quantifiable if not always comparable. By now, though, it should be evident that the real risk to player immersion isn't jaggies, but worlds that fail to convince because of repetitious structural templates, terrible AI, insipid gameplay, and narrative/thematic incoherence and stupidity. The question this generation must answer, then, is whether improvements in graphical verisimilitude will ever be matched by more intelligent systems, more immersive world design, and more mature explorations of character and theme.

suggests that the answer is "no".

Sucker Punch's third entry in this series relates the story of Delsin Rowe, a Native American graffiti artist who discovers he's a "conduit" with the ability to use superpowers based on smoke (and later other "elements") after contact with a prisoner escaping from an evil government agency. Augustine, the leader of the agency (herself a conduit) tortures his tribe and leaves them all to die in agony as part of a plot to make her agency look better (?!?) so Delsin and his cop brother pursue her to Seattle.

In the city, Augustine's insane PR plan has wrecked hundreds of millions of dollars worth of bridges that will take years to replace, covered the city in unsightly concrete monstrosities, and erected cameras and checkpoints in a failed analogy of the security-theater state that has evolved since 2001. It's up to Delsin to take her down by destroying her troops, installations, and cameras, and also painting stencil art to embarrass her. He must also establish whether he'll be a villain or a hero via a morality system so asinine it can scarcely be believed.

Good or bad, Delsin becomes a mass murderer because the game is too lazy to conceive of a way he can succeed otherwise.

Killing Augustine's agents doesn't cause Delsin to accrue much "bad karma" even though they are presumably not all evil, but knocking off cops is always bad even though Seattle's actual police force has been criticized by the Justice Department for violating Constitutional rights with excessive use of force—the same sin the agents commit.

Killing drug dealers is good by the game's yardstick, but breaking up the activities of non-dealing gangsters counts as evil, despite the fact that one mission shows this latter group of thugs literally loading conduits into transports so that they can be shipped off to the evil government agency's concentration camp. Thanks to this, Second Son gains the dubious distinction of being the only game where killing Nazis is bad karma.

The game's attempts to react to Delsin's morality are also laughable. No matter what kind of bloodthirsty maniac Delsin becomes, his cop brother never suggests that maybe he shouldn't have incinerated that group of 30 civilians. Citizens react absurdly by insulting him to his face, even though one of Second Son's major activities involves Delsin spray-painting defiant stencil art onto Seattle's buildings. A thoughtful game would have the civilians, appropriately, turn this tool against their new tyrant.

For all its airs, though, Second Son is not a thoughtful parable about morality, power, or the role of pervasive surveillance in a modern democracy. It's a just a game where Delsin shoots dudes who happen to like putting up cameras.

Despite gaining four different kinds of powers in the game, most of the action boils down to taking potshots at a distance with skills that approximate a gun, rocket launcher or grenade, while closing in occasionally for hit-and-run melee attacks. The different skill trees end up feeling mostly like minor variations on a theme, and produce very little tactical variation because no matter what power he's using, Delsin is too fragile to engage in a short-range slugging match against enemy forces, or even to survive their very accurate long-range fire. Second Son tends to play like nothing so much as a cover shooter with no cover system.

To survive, Delsin must retreat to the rooftops or around corners to avoid enemy bullets. Government forces will eventually follow him, but their rooftop attacks are marred by bizarre AI behaviors and seem more like wacky hijinks than threatening encounters. The troops are most dangerous when on the ground and concentrated, which makes their reticence to stay that way another manifestation of AI boneheadedness. The game's only challenging moments came when it dumped dozens of these fools into a small area and told me I couldn't leave it.

All this shooting and exploding knocks over dozens upon dozens of the government's ready-built installations, though since the story is that they were put up in a single week, this hardly seems much of a setback. As guard towers topple and APCs detonate, the city remains practically impervious to all the destruction, down to the glass-enclosed bus stops. The same was true in The Saboteur, which I loved, but that game specifically presented itself as a stylized adventure and meant to tell the story of a city's resilience. Second Son couldn't tell that story even if it wanted, because neither Seattle nor its people are of any significance to it.

Aside from an excursion to the Space Needle, nothing about the Second Son seems to reflect any aspect of Seattle's character, and nobody who plays any role in the story is a native. Delsin has no relationship with the city at all: no base of operations, no native contacts, no favorite restaurant. He can't even stop off anywhere for a cup of coffee. Seattle may as well not be there, and any generic assembly of buildings would have served the same purpose.

The city is there, of course, and the included Seattle landmarks give rise to some very pretty vistas. It's a joy to move around using Delsin's powers, but spend any time doing that and the whole illusion cracks up, broken apart by the templated buildings and repetitious elements that have been the bugbears of open-world design for years.

What is the point of using graphics that invite close inspection to construct a world that won't hold up to that scrutiny? Why should so much effort be bent towards programming convincing facial animations and using quality voice acting that demands the player's attention when what's being said and done isn't worth a moment of anyone's time?

has no answer for these questions. This game is a mountain of glittering garbage, an incoherent and soulless product unburdened by anything resembling compelling gameplay or convincing human drama. Is it a beautiful representation of Seattle? Sure, but so is a postcard, and the latter won't insult your intelligence. Rating: 3 out of 10


Disclosures: This game was obtained via retail purchase and reviewed on the PS4 using default graphical settings. Approximately 25 hours of play was devoted to single-player modes (completed twice).

Parents: According to the ESRB, this game contains: blood, drug reference, language, sexual themes, and violence. Players can kill essentially any person they encounter and there are incentives to do so, if only to explore the entirety of the skill tree or see alternate storylines. Enemies spurt blood when shot with Delsin's powers and at high levels will be instantly incinerated. Granted it is also possible to play the game with less absurd violence but given how dark an "infamous" playthrough gets I feel this game would warrant something closer to an M rating. The sexual themes involve some mention of prostitutes and a kissing scene.

Deaf & Hard of Hearing: The game has subtitles for essential dialogue and even some background speech. Some sound cues are important (gunshots, enemies jumping) and in the visual confusion of a battle the sound of, say, an auto-turret may be the only warning that it exists. Some inexplicable deaths may result.