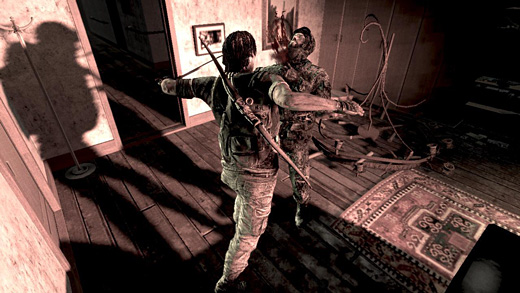 HIGH Making it to a safe ledge with just a sliver of stamina remaining.

LOW Staggering around for half an hour with a sliver of life with an irritating "heartbeat" rumble and an ugly red-screen effect ruining the look.

WTF It ends in the middle of th

The core of I Am Alive

, the part of the game I admire, wonderfully depicts the challenge faced by its nameless protagonist trying to cross a shattered metropolis. As he climbs through dust-choked buildings broken by some undescribed event, each movement drains his strength. As he pushes himself to (and beyond) his limits, the effort takes a more lasting toll on his body, tiring him in a way that a few moments' rest can't repair. Like my colleague Brad, I adored this tense, resource-driven platforming. Unfortunately, I Am Alive continues Ubisoft's history of mucking up an amazing platforming concept with unnecessary and inappropriate combat.

Fighting isn't I Am Alive's only problem. Even the platforming system could use a few tweaks, as the controls are not quite tight enough and using food and drink to restore stamina capacity should have only been available after a climb. The idea that the main character can instantly swig a soda mid-climb and keep going weakened the sense of realism and risk.

I Am Alive also flubs some other fundamentals.

The game's terrible save system cost me almost a whole chapter of progress at one point. Checkpoints are placed in irritating positions (before scenes, after combat has become inevitable) and saves don't occur after finishing a sidequest. A resource-based save-anywhere system would have made the game just as difficult without being nearly as annoying. I Am Alive's misguided, redundant way of conveying the main character's low health (an annoying "heartbeat" rumble and an ugly red-screen effect) also produced plenty of irritation, which resulted in the low point of the game for me.

At least injury can often be avoided, because I Am Alive makes pointing a gun at someone every bit as important as shooting it. Intimidating enemies, even with an empty pistol, plays a significant role in getting the main character through the city. I cannot overstate how much this added to the game's sense of realism and tension. It all goes wrong, though, once the bullets actually start flying.

Fighting in I Am Alive works primarily as a puzzle system. Apart from a few enemies, the player doesn't need to aim in any real sense. He just selects an enemy and presses a button to kill him. Although the protagonist has supposedly never used a gun, combat doesn't derive any of its challenge from the physical process of shooting, but instead challenges the player to manage position and aggression while magically sucking every bullet he walks across into his gun to reload.

This matters because it divides the player from the character. I Am Alive's platforming segments ask the player the same question that faces the character: "Am I strong enough to make it?" The combat, however, asks the player, "Who do you kill?" while the character wonders "What if I miss?" This separation reduces the immediacy and realism of the combat relative to the platforming.

Even that would not have sunk the game had the developers used combat economically. Alas, I Am Alive supplies a steady stream of thugs, in ever-increasing numbers. Early on in the game, each encounter feels weighty and meaningful, each enemy like a person. As the flow of near-identical hooligans continues, however, they become anonymous and irrelevant. Their numbers and aggression cannot be reconciled with their locations or the setting. Worse, as he leaves dozens of dead bodies in his wake, the protagonist becomes a post-apocalyptic commando who simply can't be squared with the maturity level Brad found so refreshing.

This devolution into action-movie nonsense shows most depressingly at the end of the game, where the platforming essentially vanishes in favor of a stand-up fight against a squad of thugs in an old amusement park. Lurching from this fight into its abrupt ending, I Am Alive completely lost me, concluding without any of the things I found valuable in it.

has a unique take on platforming and post-apocalyptic survival that absolutely deserves to be praised. These positives, however, appear alongside a suite of systems that pointlessly frustrate the player and interfere with the overall aesthetic. The result is an admirable but deeply flawed and divided game. Rating: 6.0 out of 10.


Disclosures: This game was obtained via retail download and reviewed on the Xbox 360. Approximately 5 hours of play was devoted to single-player modes (completed once).

Parents: According to the ESRB, this game contains blood, intense violence, strong language and sexual themes. Most of the truly gruesome things going on are implied rather than explicitly shown, but the world is obviously a broken and horrible one. Let me also add a trigger warning: although nothing explicit is shown, the rape of several women is heavily implied. Mature teenagers should be fine. Immature teenagers will probably be bored.

Deaf & Hard of Hearing: Subtitles are available for most dialogue, but did not always work properly, even in scenes where the dialogue was important, if two voice tracks were present.

Great article, though for me it overstresses the negative aspects a little, at the expense of the rest of the game. I agree that all or most of the mentioned issues exist, but one’s tolerance for them will be an extremely subjective thing. For example, I found the gunplay and the increasing number of enemies kept me just on that threshold where I was clawing for survival and felt that things were about to go horribly wrong. The other issues – they exist, of course, and will cause individual moments of frustration, but it’s quite possible that they will never… Read more »

I had to wait until the demo hit the PS3, so I couldn’t really comment on Brad’s review, but from the 30 minutes I played, combat was already the most annoying part. There’s some trial and error involved with everything in the beginning of the game, and I wondered what the point of having a limited number of retries was. I would imgine it adds to the tension, but presumably not in a good way if the result of running out of lives ends in the frustration of having to do huge portions of the game all over again. Amy… Read more »