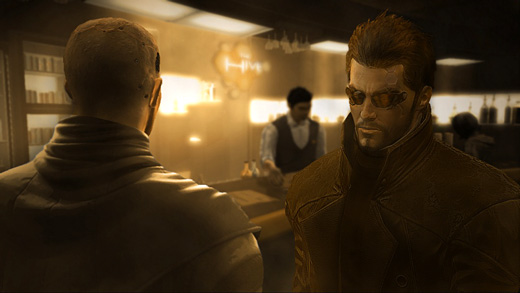 Criticism of Deus Ex: Human Revolution tends to be mostly directed towards its boss battles. That's fair, because they don't fit the game very well, but the overwhelming focus on these moments seems to have distracted people from an equally significant problem, namely that the game seems to fall apart in its final level. The traversal of Panchaea that ends the game pits the player against strange enemies and a weak antagonist, unleashing dull revelations on the way to an abrupt and uninspiring final choice. In terms of both plot and mechanics, Human Revolution goes out with a whimper, even if the player chooses to end it with a bang.

The trouble starts even before the final level. The premise of Human Revolution's conclusion is that the Illuminati have given augmented humans special biochips which will allow the conspirators to incapacitate them via a remote signal. It's a clever idea, and to make sure that everyone gets one of these special chips, the Illuminati broadcast a remote signal that causes everyone to suffer incapacitating glitches so they'll go buy new biochips. Perhaps only the illuminated ones can understand the logic here, but I fail to see the value in coming up with an expensive, convoluted plan to give yourself an ability you will require in order to implement that plan.

At any rate, the plan works, except that Hugh Darrow, the genius who invented augmentations, subverts the biochip so it turns augmented people into raving, homicidal lunatics unless they are important characters in the story, in which case they are fine. It's up to our hero, Adam Jensen, to stop the broadcast of the signal that's doing this, so he steals Darrow's Low-Earth-Orbit shuttle and hightails it to the mad doctor's not-so-secret lair. The shuttle's chutes fail to open, so he plunges into the sea and dies.

Aw, I'm just foolin'. The parachutes do fail to open and Jensen does plunge into the sea at suborbital velocity, but seconds later he's standing on the tarmac at Panchaea with nary a complaint about slamming into the ocean with enough momentum to pulverize a mountain. He then sets off to confront Darrow at the top of the man's giant hole in the ocean.

The purpose of this installation is never explicitly described, but I assume it is a giant heat exchanger meant to draw in cold water from the bottom of the sea and vent it upwards to speed the conversion of atmospheric heat into oceanic heat, dramatically accelerating the evaporation of seawater and leading to a runaway greenhouse effect. I'm not up to date on my geothermal engineering, though, so perhaps some other evil scheme is intended.

Here it is revealed that Hugh Darrow has set upon this course of deceiving the Illuminati and killing millions because he's angry that the augmentations he invented don't work for him. Now, I don't really care for the idea of a mad scientist as main antagonist. It boggles my mind, though, to think that although Human Revolution features a whole world of mechanically augmented supermen, the ultimate villain is the only crippled guy on the planet. 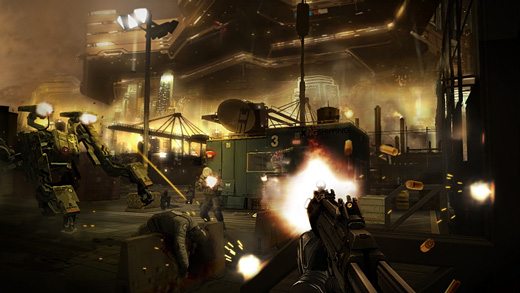 Perhaps this offends me for purely personal reasons. So be it. You still can't explain how the world's only crippled guy survived when a room full of mechanically augmented supermen went apeshit and killed everybody else.

Jensen can talk Darrow into giving up the code or shoot him in the head (or one, then the other). Aside from revealing Darrow's lame motivation and incapacity for self-examination, this conversation marks the last time the techniques the player used to advance in the game's infiltration scenarios are likely to be relevant. Once the conversation ends, the safety doors locking the maddened augmented people in the lower levels of Panchaea open, and Jensen must spend the rest of the game working around them.

Part of my problem with this setup echoes Manveer Heir's objection to the monsters that populate the final levels of Uncharted. The "Crazy" enemies at the end of Human Revolution violate the behaviors the player has learned about over the previous 8-9 hours of the game. They don't revive their unconscious friends, their "alarmed" response is to run around randomly, and their "hostile" response is to charge straight into your laser gun, or if you are nice, your gas mine. Getting around them uses almost none of the player's accumulated knowledge, and doesn't replace the preceding infiltration problems with anything at all interesting.

Contrast this to the final levels of the previous Deus Ex games, which treated the player to an assortment of each game's most difficult enemies, along with a few challenging infiltration problems. In those cases, the player's progress through the endgame built on and used everything the player had learned, in part as a way of making the argument that the player was qualified to answer the question being asked of the respective Denton.

The feeling is particularly intense in the original Deus Ex, a game that begins with what may be its most difficult level. When he joins UNATCO, J.C. Denton is barely able to handle a bunch of half-trained schlubs with pistols, but by the time he reaches Area 51 he can take down practically anything Bob Page throws at him, defy any security system, and survive almost any danger. Deus Ex ends with a feeling of power, one that makes choosing to become the world's cyborg Jesus sound like a reasonable decision. Human Revolution, by contrast, ends with the player feeling slightly uncomfortable about killing or even knocking out these people who don't know any better and were anyway only trying to save / accidentally destroy the world.

While Jensen makes his way to the bottom of the sea, he has the opportunity to converse with a few other main characters who have ideas for how he should explain recent events to the world. David Sarif, of course, wants Jensen to blame the madness on sabotage by "pro-human" extremists, thus making augmentation technology a more secure choice for the future. Also, Bill Taggart, the leader of said pro-human extremists, reveals himself to be one of the Illuminati, who wants Jensen to tell a story that encourages governments to strictly regulate augmentation technology. 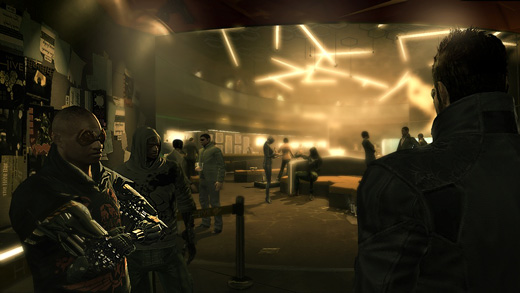 To me this was shocking because Jensen's previous quip thanking Taggart for "illuminating" him was too obvious, and I thought it was a red herring. At any rate, a populist demagogue like Bill Taggart seems like an odd choice to represent a conspiracy that has always been associated with bankers, government agents, and industrialists. A man like that is a tool of the Illuminati, not a member of the club, and his obvious bribery of Jensen felt awkward and sad. Moreover, Jensen has no option to really confront the man over the events at Sarif Industries. Taggart clearly played a role in an attack that killed dozens; doesn't Jensen have something to say about that when he's asked to do the man's bidding?

With all his options laid out, Jensen descends to the bottom of Darrow's hole in the ocean and confronts an evil computer made of people in a boss fight that, if you remembered to pick up that laser gun in Tong Si-Hung's office, lasts about 15 seconds. He is then offered a choice of four buttons to press that will decide the future of humanity's attitude towards augmentations. Naturally, all these outcomes are sufficiently uncertain that any of them could conceivably lead to the future depicted in Deus Ex.

It's fair to note that in the other Deus Ex games, any (or almost any) of the endings could be obtained in the final level regardless of one's previous choices in the game. However, each of these games positioned the player character as one possessing enormous power. For someone who can truly define the fate of the world, all the options have to be on the table at the climax. In addition, each option significantly altered the player's goals and challenges in the final level, and each came with a substantial opportunity cost. For instance, fusing with Helios in Deus Ex means you don't get to kill Bob Page. This makes the decision tough because unlike Darrow, Page is a great villain you will almost certainly hate virulently by that point.

In Human Revolution the player comes to the end of the level (maybe taking a side trip or two) and presses a button. The choice requires no investment or commitment, nor does it recognize any existing commitment. If the player decides to take an explosive barrel and throw it into the crowd lined up outside the Lower Hengsha L.I.M.B. clinic, the final voiceover will still feature Jensen's talk about resisting the urge to misuse power and resources. The endings of the previous Deus Ex were intentionally not about how you had gotten through the game, because the diversity of options made that topic too complex. Here the ending is about how you played, but unless you bought into the game's active characterization of Jensen it is wrong about that.

Conceptually and operationally, the ending of Human Revolution is a disappointment. The events depicted make little sense and heavily lean on flimsy reasoning by a lame villain, and the game's true antagonists are represented by an ambivalent figure who cannot really be confronted. The level discounts the player's experience, both by pitting him against enemies who make no use of what he's learned, and by terminating in a monologue that essentially disregards his choices. For me, at least, the problem posed by the heavily-criticized boss fights of Human Revolution pales in comparison to the silly and dispiriting way the game ends.

I started to read this last night, then decided that I was probably pretty close to the end so I ought to avoid spoilers. I’m not sure what to make of the end. Conceptually, I think it worked. What didn’t like was the overall disconnect between the ending and how the game is played. It really just seems like “Which ending would you like to see?” And all you have to do is save the game right before you pick, then you can easily go reload the save and see them all. The game that comes to mind for me… Read more »

I have been waiting for someone to point out the weakness of the last few hours of DE:HR, but all of the gaming sites have been too busy calling it one of the best games of the year. The incredibly effortless, in terms of what the player was required to do as well as what the developers likely did do, endings were bad enough that they soured my ENTIRE experience with the game. Immediately after viewing the simplistic, stock footage-filled montages, that inexplicably includes voiceover describing vague concepts and ideals contrary to the way I went through the game, I… Read more »

Man, the end of this game is ridiculous. It comes off like it was written by community-college philosophy majors. Then again so does the whole story. Honestly this game would have been better as a stealth puzzler with no dialogue.