Psycho in the Car with Pistols 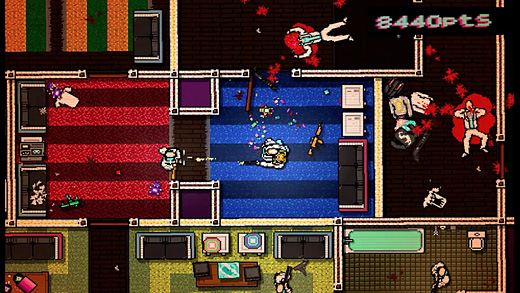 HIGH Figuring out, after multiple deaths, how to take down a whole level in seconds.

WTF Almost every moment of this game is a WTF.

Gaming culture has no greater joke than the phrase "rated M for mature." Games are fundamentally immature, dominated by juvenile power fantasies disguised with gore and tits. Few games actually take a hard look at the ideal they're peddling. This year has already seen one, as Spec Ops: The Line employed conventional AAA design to criticize the bloodlust of its players. Independently-developed Hotline Miami

This may come as a surprise to anyone who has seen the game in action for only a few moments. Hotline Miami's tilting screen and strobing background make it look like a PCP high rendered in video game form, and the brutal violence on display certainly doesn't do anything to dispel that impression. Playing Hotline Miami as an expression of sensual violence, however, is the surest way to fail at it.

Violence in games tends to be mindless, and because games incorporate a variety of expressive modes, that mindlessness covers a lot of territory. Media, and games themselves, have become much more astute at critiquing the narrative emptiness, where the reasons for fighting, the meaning of killing, and the psychological effects on the survivors are ignored in favor of hoo-rah bullet-spewing explosion-fests.

Commentary on the mindlessness of the core gameplay has been harder to come by. In most games, one does not really have to think about the killing one is doing. The action is, instead, rote. Crouch behind some cover, pop out, shoot the nearest enemy, pop in, displace if flanked. Combat engages the visual and motor cortexes, and if we are lucky, we might get something that stimulates the lizard brain enough that it will be called "visceral." But it is very rarely cerebral.

Hotline Miami must be played cerebrally. The protagonist is the most fragile, least capable character on the screen, and if anyone gets the drop on him, he will die. And the enemies, even though they are governed by brain-dead A.I., will get the drop on him. They will see him through windows and kill him. They will hear his gunshots and swarm him after he has run out of bullets. They will burst in on him unexpectedly. Then he will die, over and over, until the player gets it right. 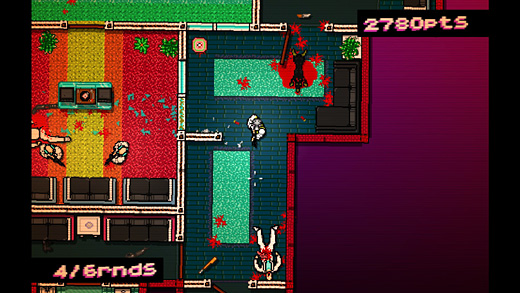 The only way to get through a level of Hotline Miami is to come up with a plan to get in, arm the protagonist, and kill everyone before he exposes himself fatally, a plan flexible enough to deal with the variables of enemy movement and hearing. The main character generally starts with only his fists and a mask. Sometimes a mask provides a weapon, such as a knife or a drill. Other masks buff the player by making door slams fatal, or turning his fists into deadly weapons. Some of them even provide a penalty.

The masks are the protagonist's only ally, and they are also his conscience. They interrogate and criticize the protagonist in his dreams. Heedless, he continues to walk up to his answering machine every morning, accepting missions to break into dumpy apartments and kill mobsters. The other half of his conscience is the act of walking out through the sea of dead bodies.

Look at what you've done. Do you like hurting other people?

At one point, the aesthetic of the missions starts to change. The main character invades more upscale places. His apartment becomes more pleasant. His hallucinations grow more dire. How much of what he is seeing is real, and how much is a hopeful fantasy? Hotline Miami doesn't answer that question any more than it absolutely needs to.

Hotline Miami is not a perfect game. Occasionally sprites fail to load, or enemies wander out of the level, or the player gets stuck in the walls. Despite regular patching, Steam features still don't work. The game suffers more, however, from wonky detection that occasionally ignores hits with thrown weapons, and has trouble recognizing contextual commands. Ill-timed failures of this nature prompt players to get angry and disengage, which is the opposite of what the game needs.

Hotline Miami also suffers from some missteps in design. Its terribly wrong-headed stealth level fails as a riff on the game's precision play, and the boss encounters are all duds. Their single-use mechanics would have been better left out entirely, particularly when they regress to patterns. In its final levels, Hotline Miami also feels less robust and interesting to play, as a consequence of some restrictive mechanics it adopts for narrative reasons.

I can't dismiss the possibility, however, that even those flaws speak to part of the issue Hotline Miami

means to address. That's the genius of the game. Hotline Miami demands that I think about what I am doing. What's more, it rewards that consideration, more deeply and thoroughly than Spec Ops did with all its polish. Rather than preaching, Hotline Miami asks the questions and forces the player to confront the answers himself, without exculpating its own creators. That's the real mark of maturity. Rating: 9.0 out of 10.


Disclosures: This game was obtained via Steam purchase and reviewed on a Windows 7 PC equipped with an untweaked i7 processor, 8 GB RAM, and a single Radeon 6800-HD series graphics card. Approximately 7 hours of play was devoted to single-player mode, and the game was completed.

Parents: At the time of writing, this game has not been rated by the ESRB. However, due to extreme violence, gore, alcohol use, and drug references, I suggest you treat this game as if it were rated "M," for actually mature.

Deaf & Hard of Hearing: No dialogue is voiced, and no sounds are essential to gameplay. However, the soundtrack is a large part of the experience, so you'll be missing out. In addition, the flickering screen and rolling of the map may cause trouble for some people.

I have to play this game for myself because I find it hard to believe that anyone really wants you to think about all the violence on the screen. Sure, that’s what the developer wants to say–and it isn’t the first to challenge violence in games with excessive violence–but developers do tend to fail when trying to force a message.