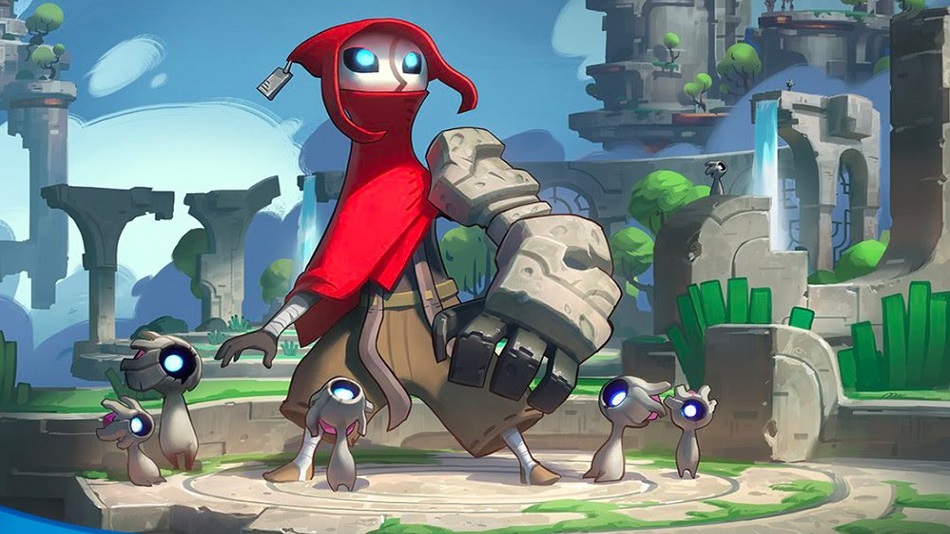 LOW Where am I supposed to go now?

Less than twenty minutes into Hob, I got stuck.

I had just gotten a sword. With no obvious way forward and no guidance from the friendly robot who had directed my every move thus far, I assumed (wrongly) that my new weapon would unlock a new path in the large area behind me.

I ran around every spot I could access, whacking everything I could see with that sword. I almost thought I had run into a glitch until, almost half an hour later, I found that I had the unknown ability to jump sideways between vine-covered walls. This jump, not the sword, was the way to get to the next area.

This is the characteristic experience of playing Hob — wandering around and wondering where the hell to go next to advance the story, and too much of it is like this. The ways forward are tucked around distant corners, down strange ladders, and across gaps that aren’t obviously jumpable. I’ve found secret areas in other action-adventures that are less obscure than Hob’s critical path.

Playing the game pre-release, I confess it annoyed me a lot to spend so much time searching every corner of the world for a way to reach the objective marker on my map — when there even was a marker, that is. By the time this review gets published, though, there will be walkthroughs and let’s plays and forum posts by the dozen. Figuring out the next destination and the way there will be no more difficult than saying, “Siri, where do I go next?” However, I think this is still a problem because it forces the player to come up for air, and to disengage from Hob‘s world.

That feels like a mistake because the game is clearly meant to draw the player in. From the beginning, Runic has had a talent for bringing worlds to life with background details, such as the distant Ratlins mining ember in Torchlight. Here the player can reach every faraway place that can be seen, while the camera’s high angle and fixed southern orientation ensures that these glimpses are incomplete and tantalizing, urging the player to find a way there.

Even the empty edges of the world beckon. While Hob at first seems to offer a natural world with structures built on it, it soon becomes evident that the world itself is a structure. In some of Hob‘s most memorable sequences, the player is sent beneath its surface to peer behind its superficial naturality. Ancient machinery runs down there, sending pieces of land rising and falling, matching pipes and electrical conduits, to unknown ends for inscrutable reasons. Nothing in the game speaks any language that the player’s character can understand, and if explanations come at all, they come in the form of hand gestures or barely-intelligible glyphs scrawled on walls. 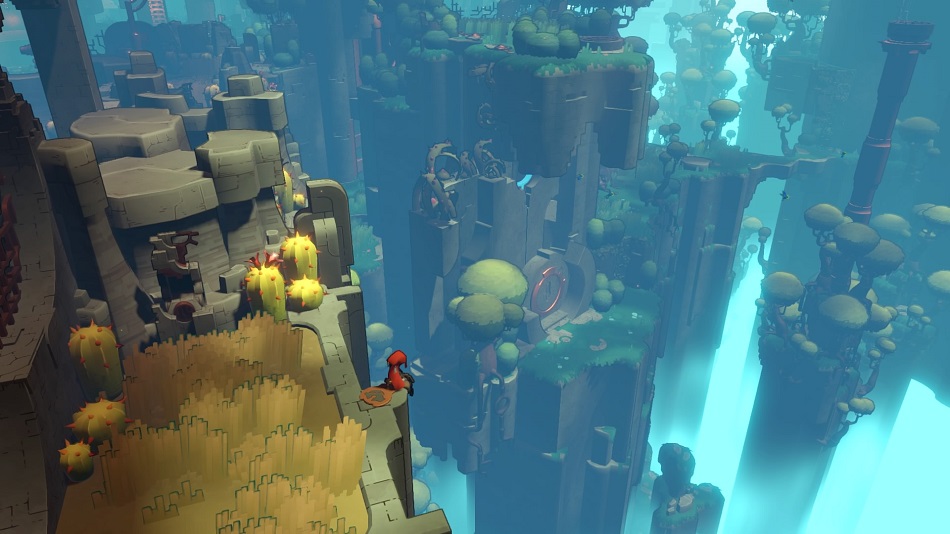 While this obscurity helps to suffuse Hob with a sense of mystery and mourning, it comes with frustration, much of which could be alleviated if someone clearly said, for instance, “go find the golden ladder in the forest” or even if it just gestured in that general direction.  A strange choice, since it raises the question of consistency – the game’s upgrade interface explains everything in plain English.

What the player character is doing to get into and through these places is built around a backbone of hack-and-slash platforming. There’s a fair bit of fighting against the angry, toothy beings that have taken over this world, most of whom sponge up just enough damage for combat to teeter on the line between ‘entertaining’ and ‘tiresome’. The fixed-following camera sometimes allows them to disappear behind the scenery, though this rarely resulted in a death. The platforming seems to have been optimized for the camera, though the jump timing felt a little finicky and too often in the character clinging to a ledge rather than making the intended leap.

The player-character’s abilities play to both sides of this backbone. She gains a powerful charged punch, which opens paths through certain walls and also shatters enemy shields and armor. The ability to warp between platforms and across short gaps also improves combat evasion and can stun adversaries. These abilities help to create focus in each sector of the game — when my character gained the ability to warp, progress in that area hinged on warping.

This develops a contradiction in Hob‘s design. Even areas that don’t introduce a new ability feel highly channeled, with only one direction to go and one thing to do at any time. The player thus pushes forward easily until the area is done, at which point the total mystery of where to go next brings everything to a halt. It’s that transition from “the next step is obvious” to “what do I do now?” as much as the fundamental confusion itself that shocks the system and builds frustration.

Does Hob serve itself by obfuscating its path and story as much as it does? I don’t think the experience is better for these choices. Forcing the player to bang their head repeatedly against the walls of the world undercuts, rather than strengthens, the game’s considerable charm. The inability to clearly communicate also interferes with the intended emotion of the finale, giving a supposedly solemn choice a silly prelude that doesn’t lay out the stakes in any intelligible way.

It would cost Hob nothing to make the path to each new destination clearer because its magic lies in the distant rotation of enormous gears, in the way a vast block of land raises up in the air to reveal robots working beneath it, and in the way the grass grows into place as if it’s being pushed up from below. The magic lies in how this vast machine of a world, now overtaken by some malignant force, can be changed and controlled but never understood. When I reach that place in the distance I won’t know what it’s for, and anything that could tell me is gone. Yet I still want to go there.

Disclosures: This game is developed and published by Runic Games. It is currently available on PC and Playstation 4. This copy of the game was obtained via the publisher and reviewed on the PS4. Approximately 16 hours of play were devoted to the single-player mode, and the game was completed. There are no multiplayer modes.

Parents: According to the ESRB, this game is rated T and contains Fantasy Violence, and Blood and Gore. The player character will explode in a cloud of blood when killed by certain enemies or a long fall, and in one scene its arm is amputated. The gore can be turned off in the menu, however, and otherwise I can’t see this game being distressing to younger children. The rating strikes me as an overestimate for a game that is reasonably E10.

Deaf & Hard of Hearing Gamers: All communication in the game is wordless and there are no essential sound cues. The game should present no problems and is fully accessible.